White Dam opal field is situated about 11 km from Andamooka township. Opal was discovered here in 1965 and some beautiful gems have been unearthed. I have written a post about White Dam and you can read it by clicking on White Dam.

In March this year I was contacted by Peter asking if I was interested in any photographs of White Dam as he had been a miner there for two years some time ago. He has since sent me some photographs and a story of his time there which I will now relate mainly in Peter's words. I hope you find it as interesting as I do because there is very little written about the miners experiences.

" It all began when my partner died while I was living in Queensland. I had a mate living in South Australia who was always keen on opal mining. He often used to go to Coober Pedy noodling for opal. Anyway he rang me one day and said did I want to go opal mining with him. Well I was not sure what I wanted at that time, but I thought about it and thought it would be something different, so I agreed to go with him.

I would have to sell up everything in Queensland and move to South Australia and that is what I did. It took me three days to drive to his place. I ended up staying there for three months as it was summer time and no-one lives in the opal fields in Summer unless they have air conditioning or live underground.

We stayed there until April when it had cooled down a tad. We spent the time getting our equipment ready for mining and when all was ready set off for Andamooka.

My friend knew an opal dealer who lived in Woomera and he advised us to go to White Dam about 11 km from Andamooka itself. He took us to White Dam and showed us around the diggings. He knew the place quite well as he had a mine there some time ago. He also showed us a shack we could use while we were there and that is it shown in the photos below.

We moved into the shack which was in a bad state of repair. It had many holes in the walls and when the wind blew it sounded like there was a pack of wolves outside. But it was dry and we had somewhere to sleep. 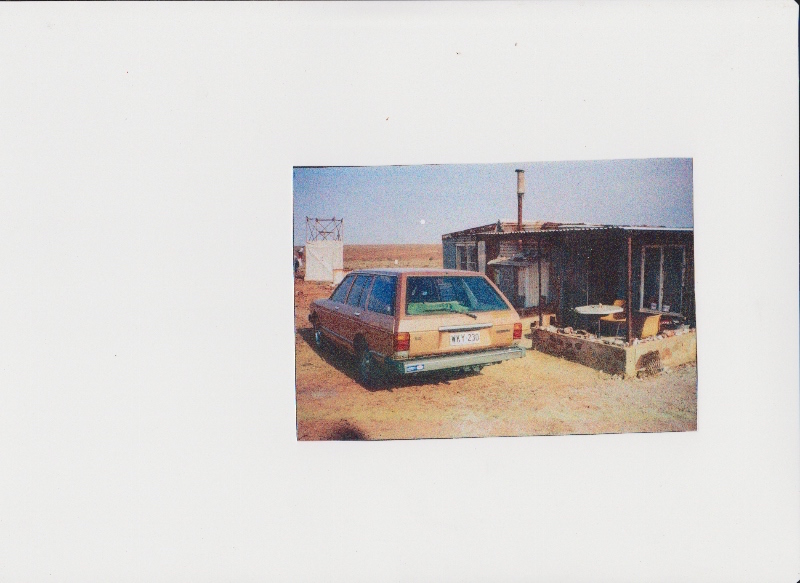 Another View of Peter's Shack at White Dam Opal Field

Our shower was an old water tank stand with canvas wrapped around it and a bucket shower suspended above. The loo (dunny) (toilet)was a long drop about 35 feet deep. 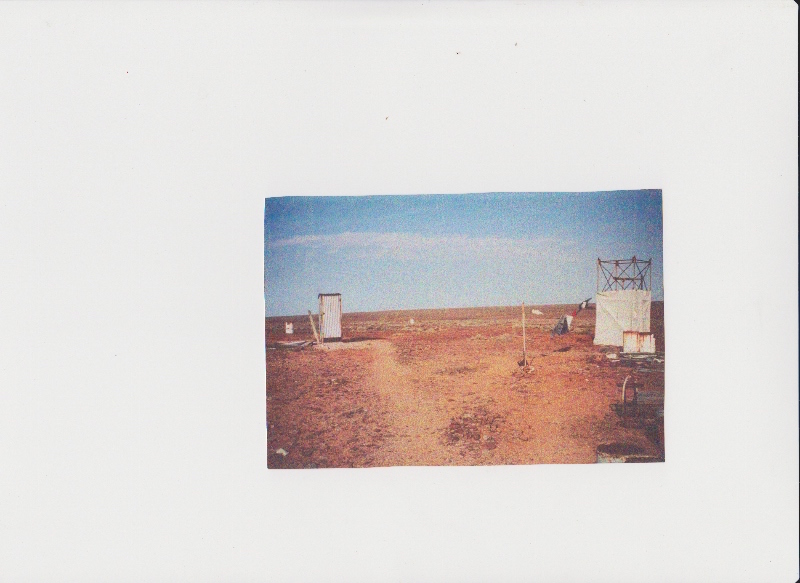 We settled in and the next day went looking for a mine to work. We had brought a set of ladders with us so we could access any shafts about 35 feet deep as this was the depth of most of the mines at White Dam. We found one area where five shafts had been drilled down in close proximity. We tried two of them but found they didn't go anywhere. The other two opened up at the bottom of the shaft into an area that had been dug out by a bobcat excavator. The area opened out into a large space and my mate decided this would be a good place to do our mining. 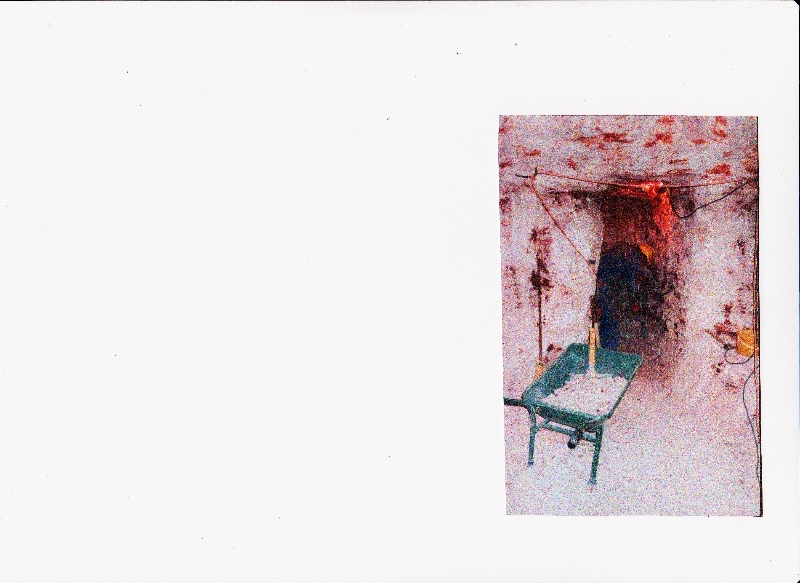 Inside Peter's mine at White Dam Opal Field 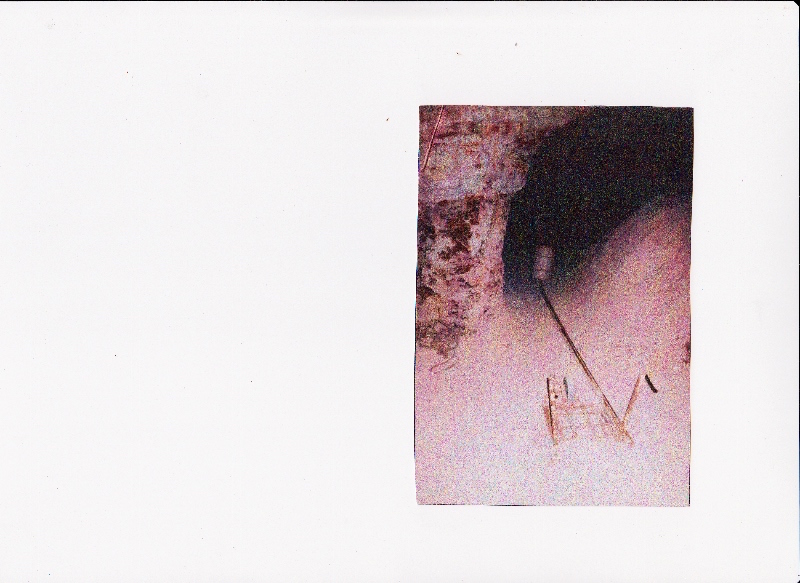 Another View Inside Peter's Mine at White Dam Opal Field 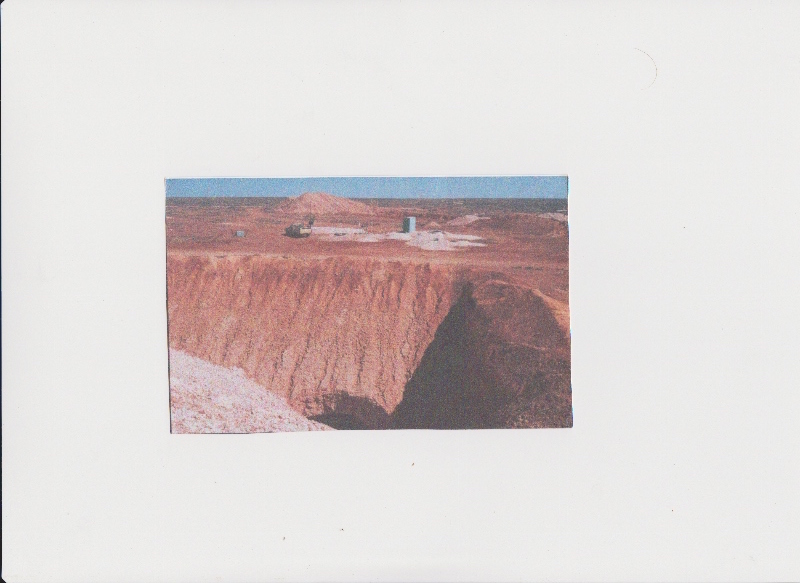 Open Cut near Peter's Mine at White Dam Opal Field

I am hoping Peter will send me some more information about his time at Andamooka. It is always interesting to hear how people started mining. In Peter's case he was invited by a friend after his partner passed away. Having no other plans he sold up and set off. I still don't know if Peter found any opal but it appears he enjoyed his stay At the White Dam Opal Field. It certainly would have been an experience.

If I get any more information from Peter I will share it with you. I hope you enjoyed seeing the old photographs and reading his story so far.

To be continued (I hope)