Recently Ross from NSW contacted me and asked if I could treat some Andamooka Matrix Opal his father had found some time ago, when he mined at Andamooka. Ross apparently has quite a collection of Andamooka Matrix opal and is looking to sell it. If anyone is interested please contact me and I will forward your contact details to Ross. There is very little opal being found at Andamooka nowadays and large pieces of matrix will become quite rare as it is found nowhere else in the world. This may be one of your last chances to acquire such beautiful pieces,

Of course I said yes to treating this matrix, as it is great to see opal that has been set aside for years. There must be some amazing hoards of opal that old miners families have stuffed in cupboards not knowing what to do with it.

Anyway, Ross sent me a mixed lot of matrix for me to check out and treat if possible. The 1st photograph shows the parcel, as opened and before treatment. 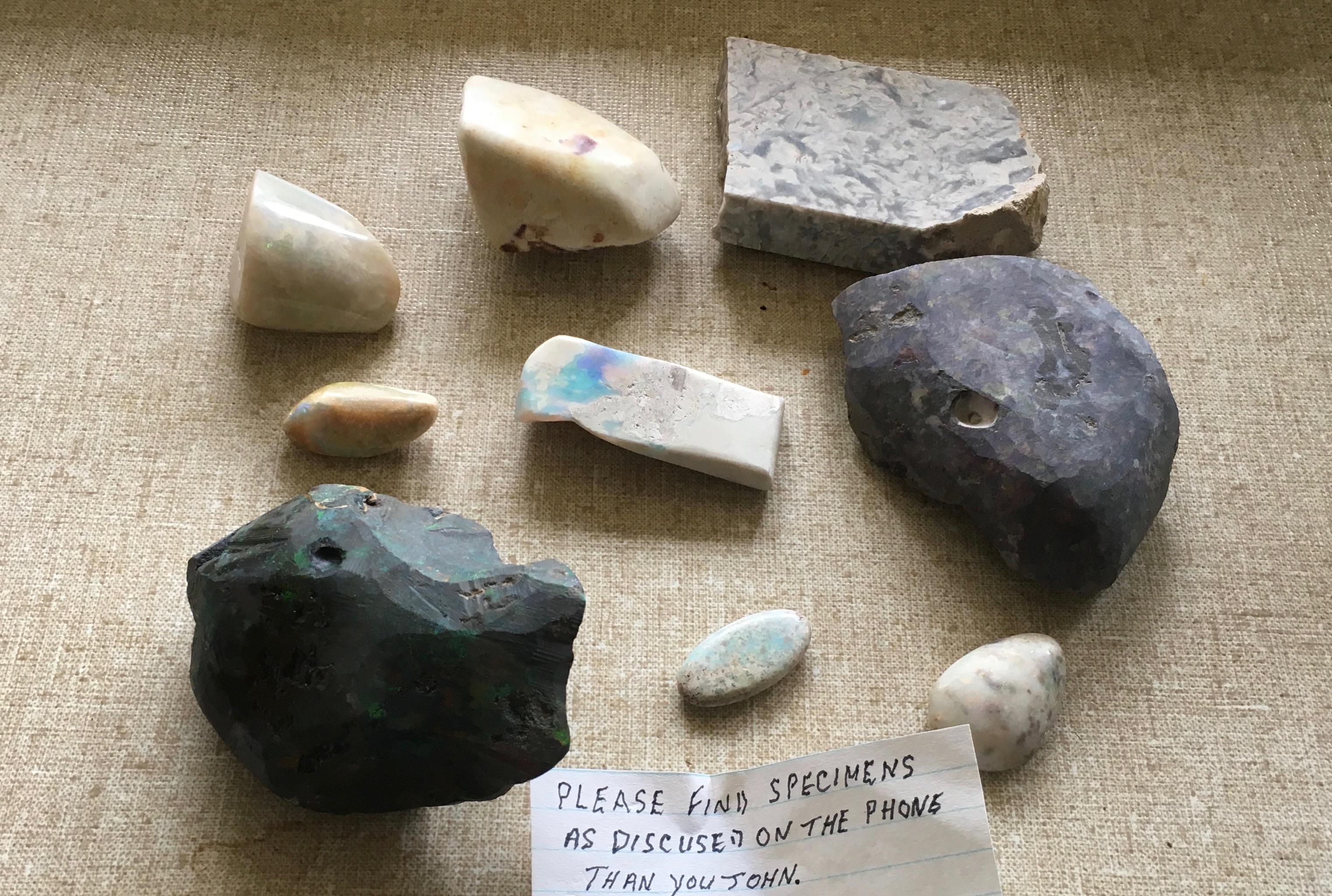 There were a range of pieces with the two largest having had a preliminary treatment by someone else to see how they would treat.

The request from Ross was to roughly shape them as specimen stones and then treat them with sugar and acid to see how they would come up.

Upon inspection it was clear that the two largest pieces should treat well as the previous preliminary treatment had worked. I had doubts about some of the other pieces as they appeared very dense and shiny. This indicates that there would be very few pores for the sugar to be absorbed into. The stone needs to be porous to some extent in order to be treated. Ordinary opal is not porous, being very glass like and hence cannot be treated.

Treatment of Andamooka Matrix Opal involves cooking of the matrix opal in a sugar solution for several hours and then doing the same in a sulphuric acid solution. The sugar is absorbed into the pores in the matrix and the acid then carbonises the sugar turning it black in most cases. This treatment changes the background colour of the stone from a pale colour to black thus allowing the brilliant opal colours to stand out. While it is a treatment, the opal itself is not being treated. It is still the same as it was before treatment. For more details on how to treat Andamooka Matrix Opal click onto Johnos opal Treatment of matrix opal.

The first task was to take away the sharp edges of the larger pieces and and grind the surface into as smooth a surface as possible. As Ross wanted these kept as close as possible to their original shape, this meant only minimal removal of material. There were a few pits and rough patches and these had to removed except in the case of the two larger holes, as this would have meant removal of a lot of matrix. These two larger holes were dremelled out to make them smoother.

The top areas were then sanded with 1200 grit wet and dry paper and then treated for two days in the sugar solution. After this they were placed in a sodium bicarbonate solution in order to neutralise any remnant acid.

They were then polished using cerium oxide. I also tried using 50,000 diamond grit on a leather buff, but this did not work as well as the cerium oxide.

Matrix does not always polish as well as natural opal as the surface is more porous. You have to be a bit careful with the Cerium Oxide as it can lodge in the pores and you have to scrub it a bit to get it out.

The two larger pieces and one of the smaller pieces turned out quite well, although I had to do a bit more sanding and polishing to get rid of a few rougher patches which had appeared on the surface. This can happen with some matrix as you chase away some scratches , other appear due to non uniformity of the pores in the surface.

This first photograph shows the finished major piece. The colours were brilliant and the polish reasonable. This was a large piece of matrix and made a brilliant specimen. It could have been slabbed and made into many pieces suitable for jewellery but this was not Ross's preference. 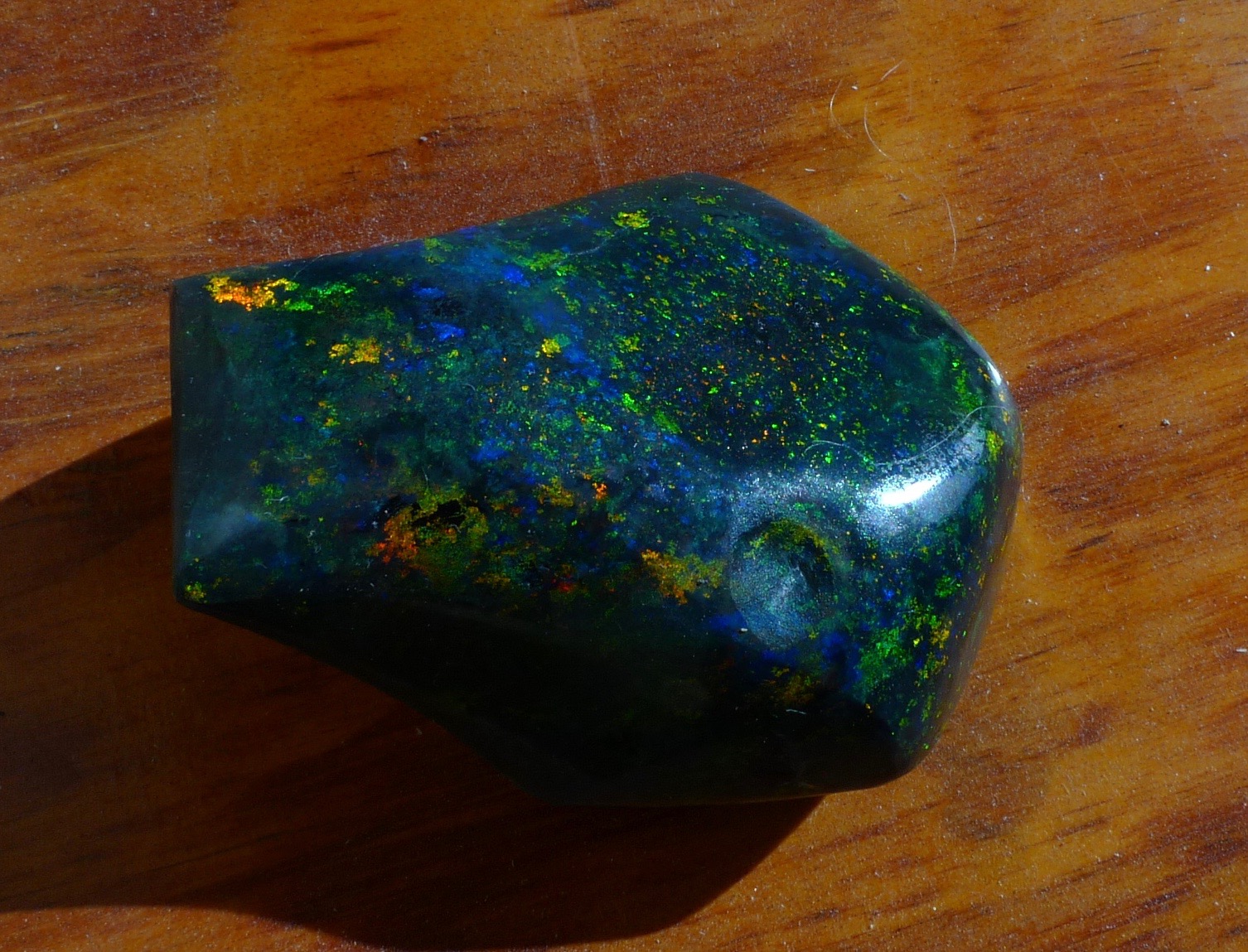 This next photograph shows the next piece. It had a layer of Andamooka Matrix Opal overlaying a porous base stone. I trimmed this so the base stone was not visible from the top but did not shape the back as this was to be a specimen viewed from the top only. The top surface unfortunately had a sandy piece across the middle. I did not attempt to cut this out as it could have gone right through the matrix layer. 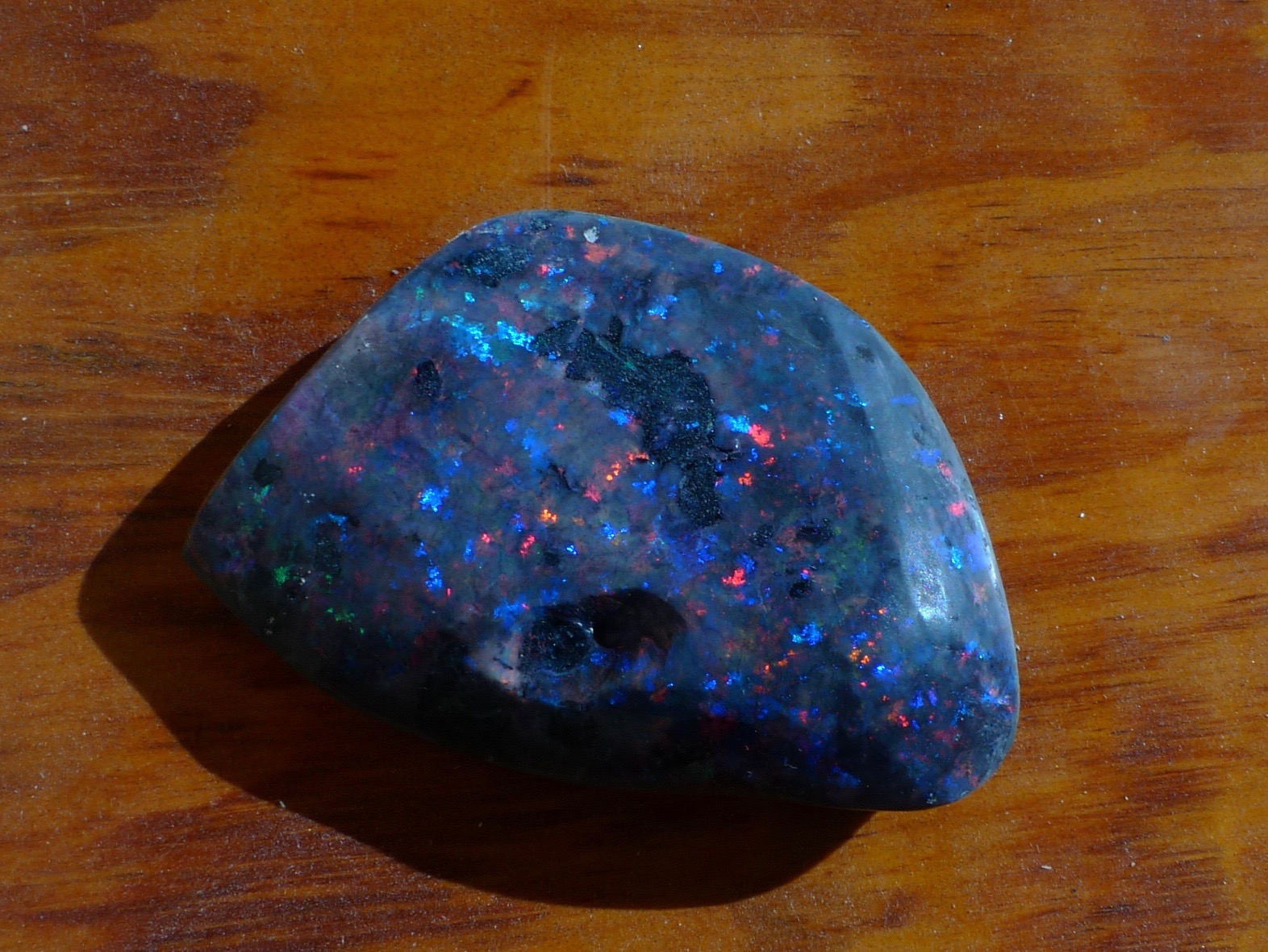 This next photograph is of a piece where again there was a layer of matrix overlaying base stone. This piece looked better with the base layer extending beyond the edge of the matrix layer and it made the whole specimen look larger so I did not grind it off. 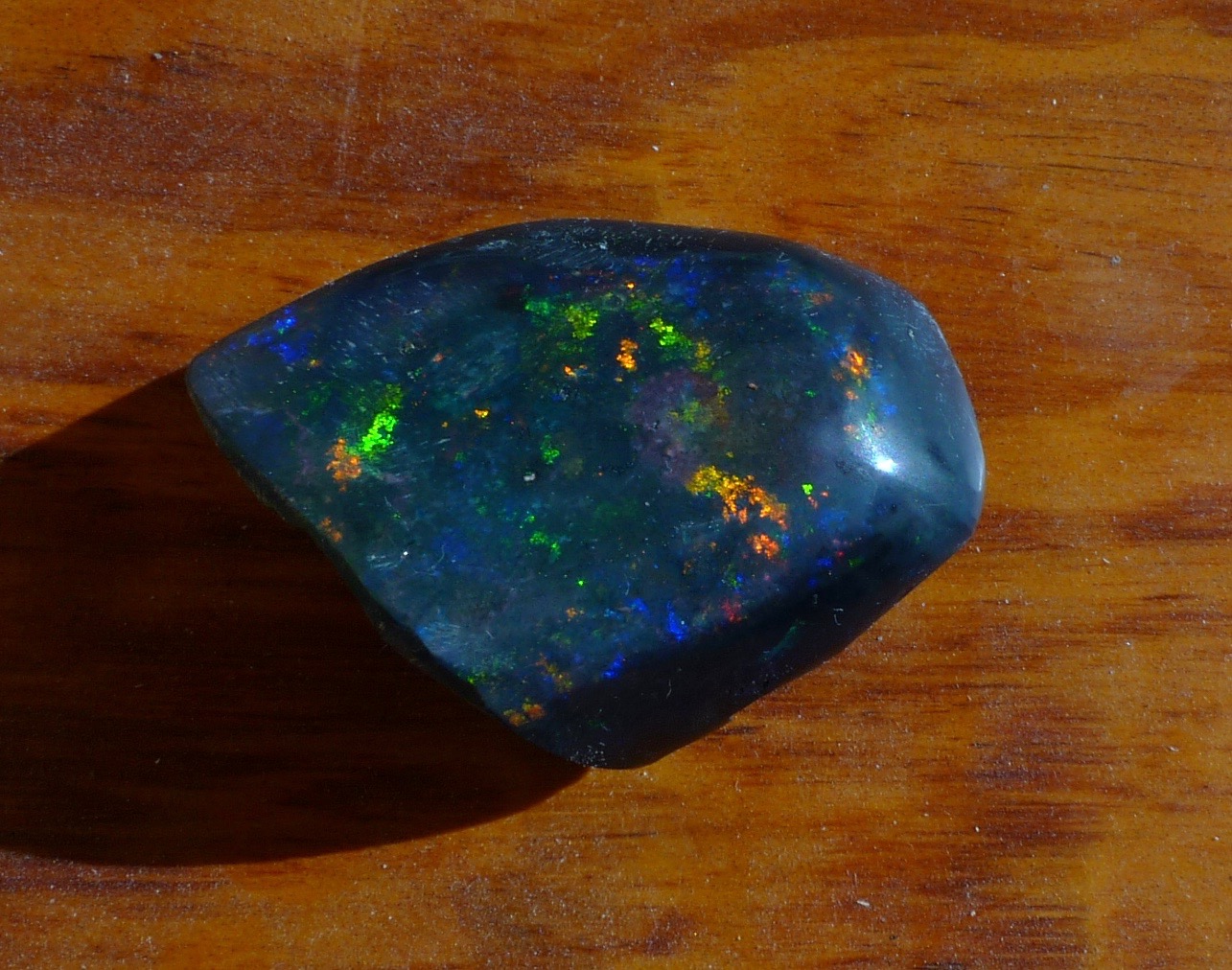 This next piece was a slab with all sorts of colour highlights. It treated well and now Ross can decide what he wants to do with it. This piece was only treated and roughly polished. 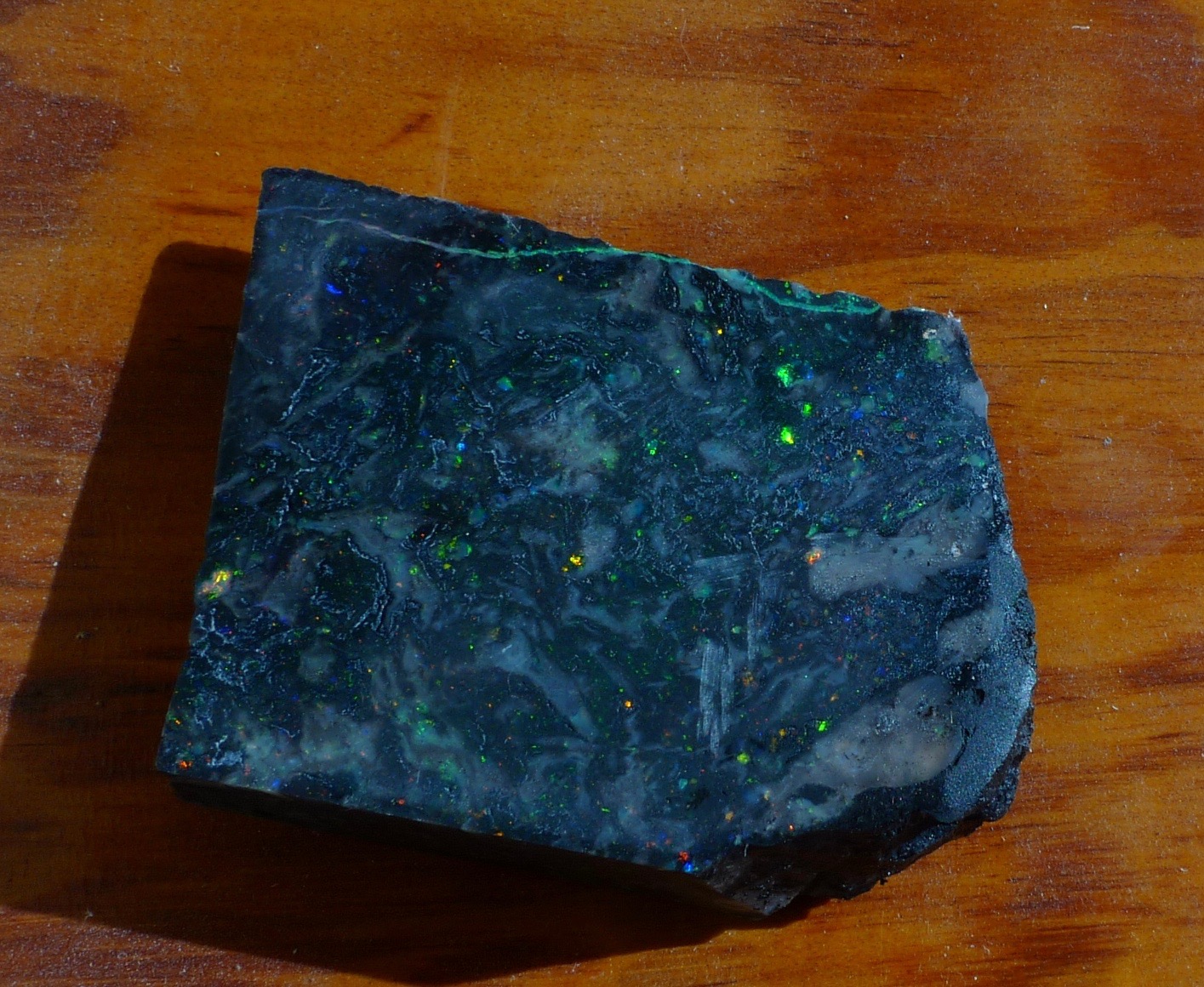 This next piece had some lovely Andamooka crystal opal surrounded by matrix. This often occurs and can look lovely. It was treated and lightly polished as a specimen. 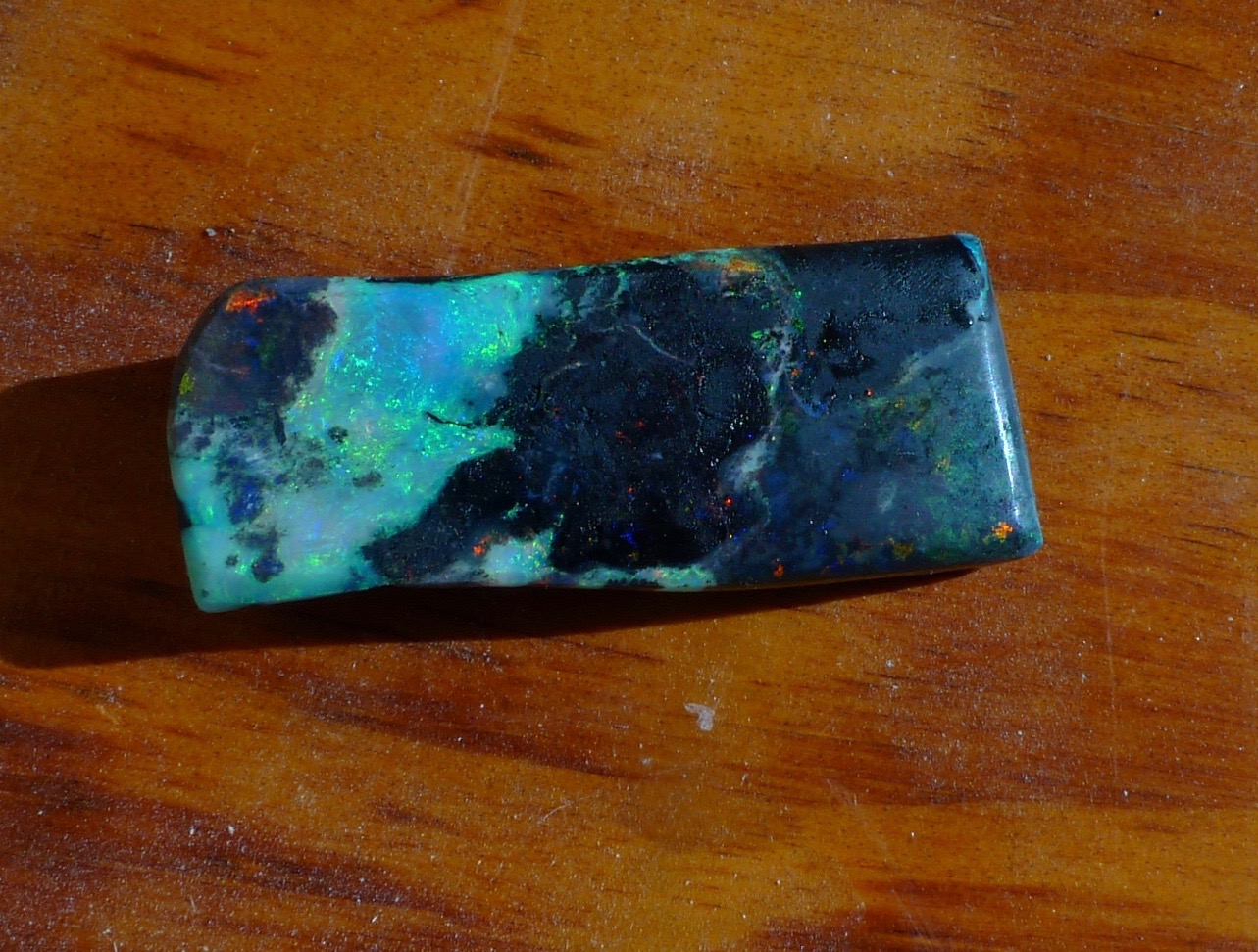 This last piece didn't take the treatment very well absorbing only a small amount in patches. It was a dense piece and I was sure it wouldn't treat but tied anyway. The stone did take a good polish because of its density. The stone could be re-cut to remove the black spots and then re-polished. 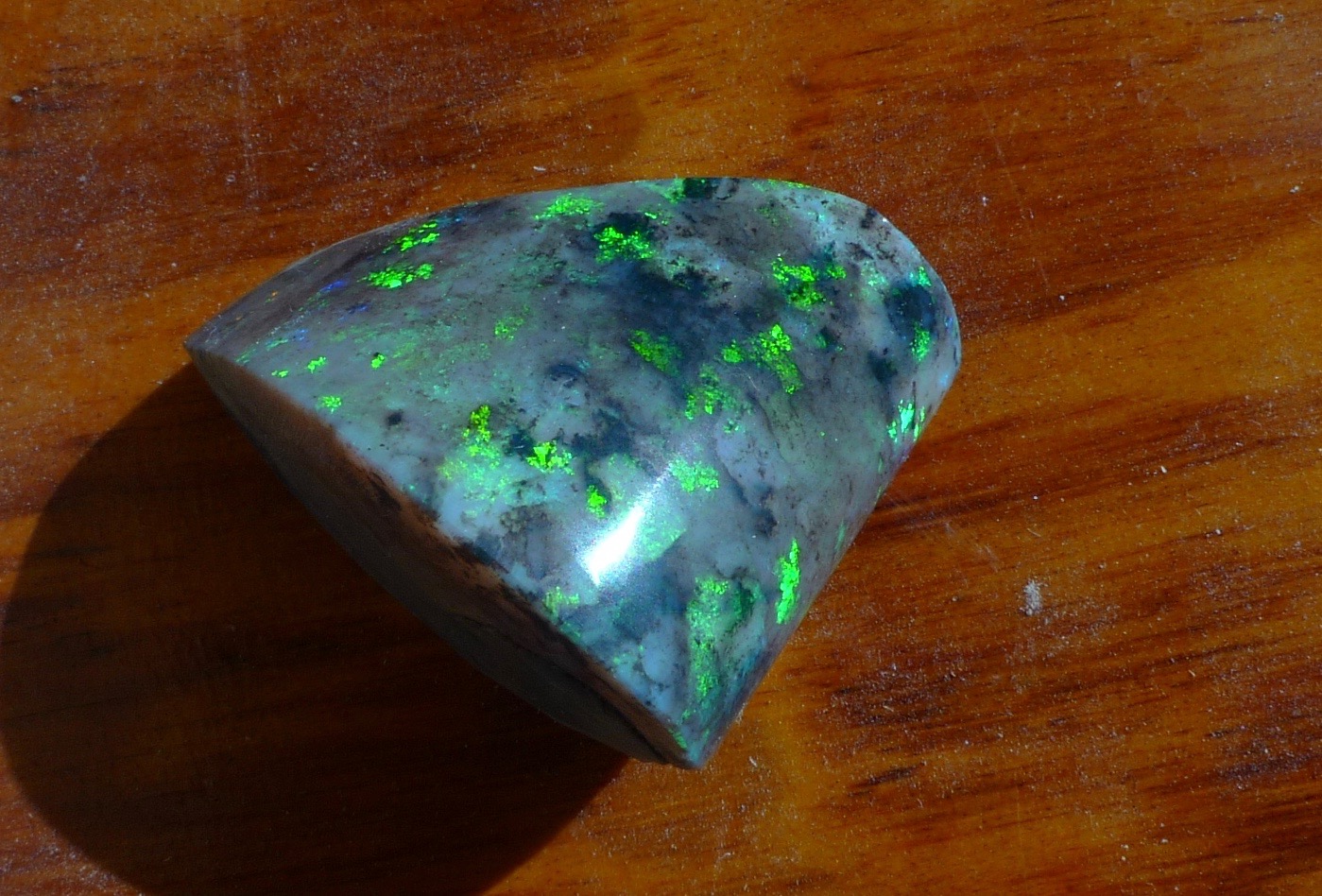 Andamooka Opal too dense to treat

This last photograph is of the collection as returned to Ross. 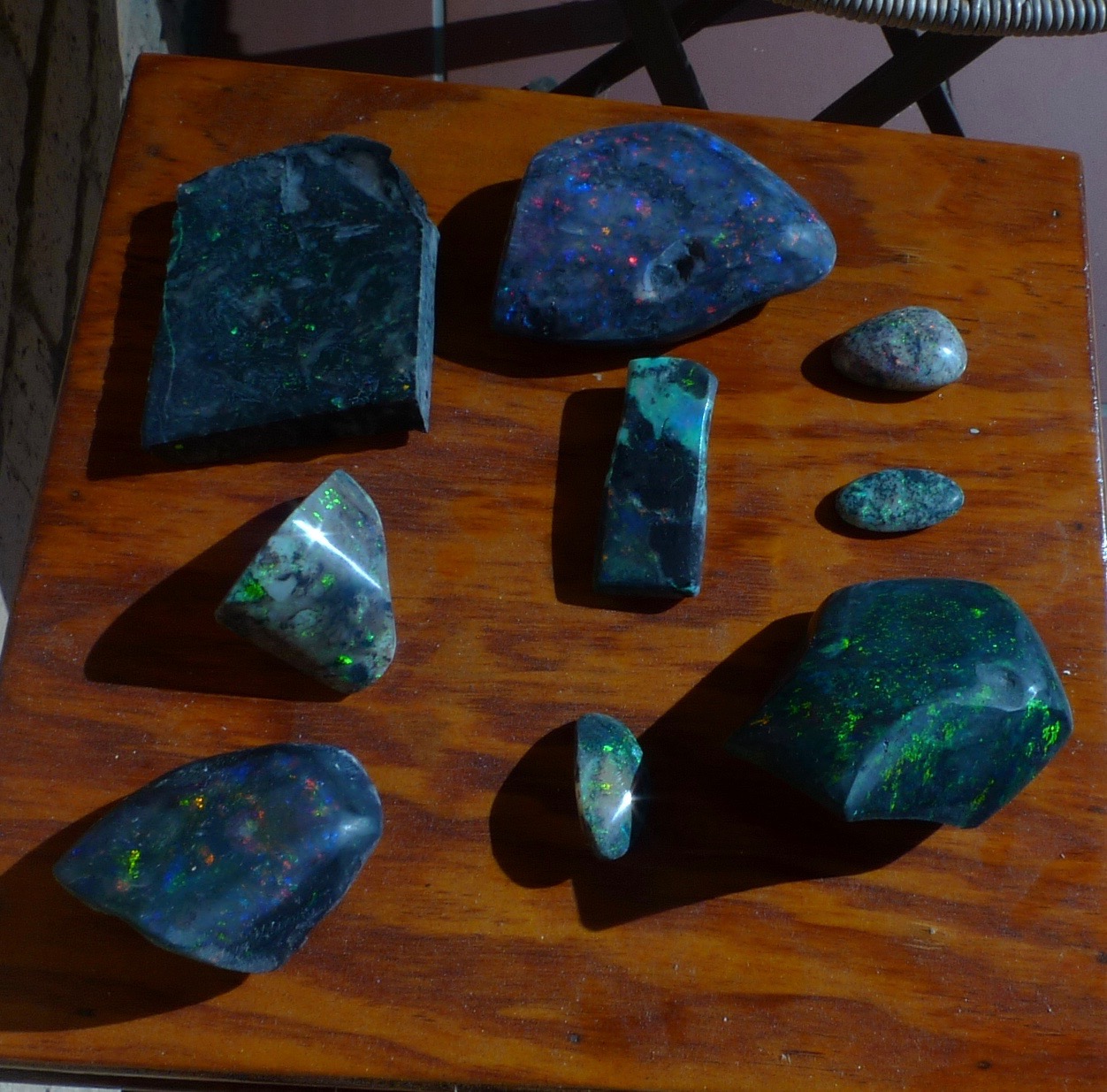 This last photograph shows the 9 stones after treatment . Five of them responded well and were certainly much enhanced by the treatment with the other four not responding as well due to the reduced porosity of their surface.

Ross has indicated he is very happy with the stones.