Boulder opal is a special form of opal found only in Queensland. "Boulder opal" is the result of opal forming silica penetrating cracks and crevices in ironstone boulders.

Formed millions of years ago, amorphous silica seeped into random cracks or in between concentric layers of ironstone that formed the boulders. These boulders vary in size from quite small to some even metres across.

However it happened, the result is often quite spectacular. Brilliant coloured opal filling the interstices of dense brown ironstone results in one of the finest gemstones found on earth. The colours in boulder opal are often brighter than other opal and are accentuated by the contrasting dark background of the ironstone.

The ironstone itself is a beautiful stone. Sometimes it is a uniform dark brown but often it displays lovely patterns depending how it was formed. The precious opal can be in the form of narrow seams or interspersed throughout the ironstone in all sorts of patterns. 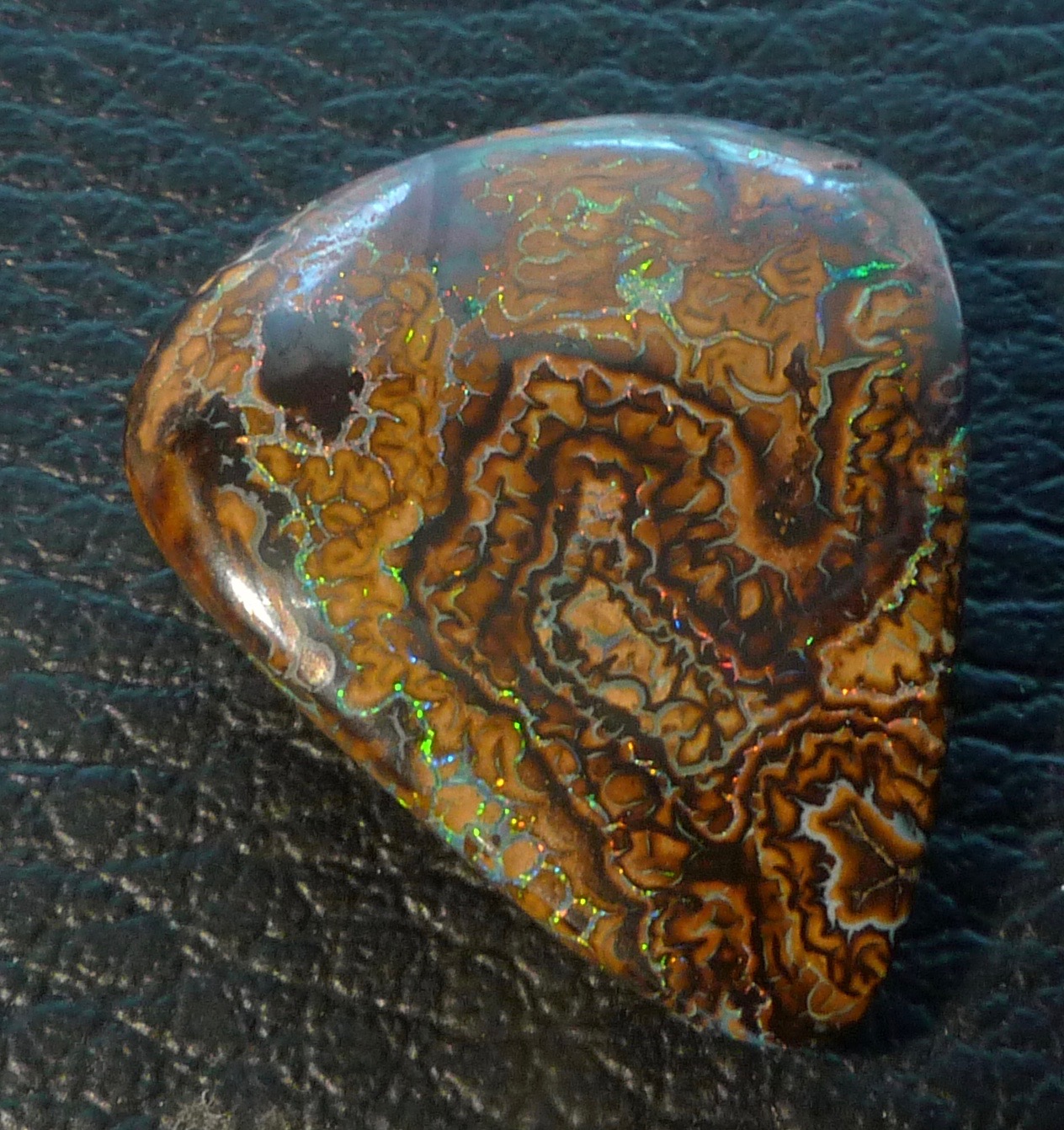 The above piece of boulder shows an amazing pattern with flecks of coloured opal accentuating the pattern. This is one of my favourite pieces. 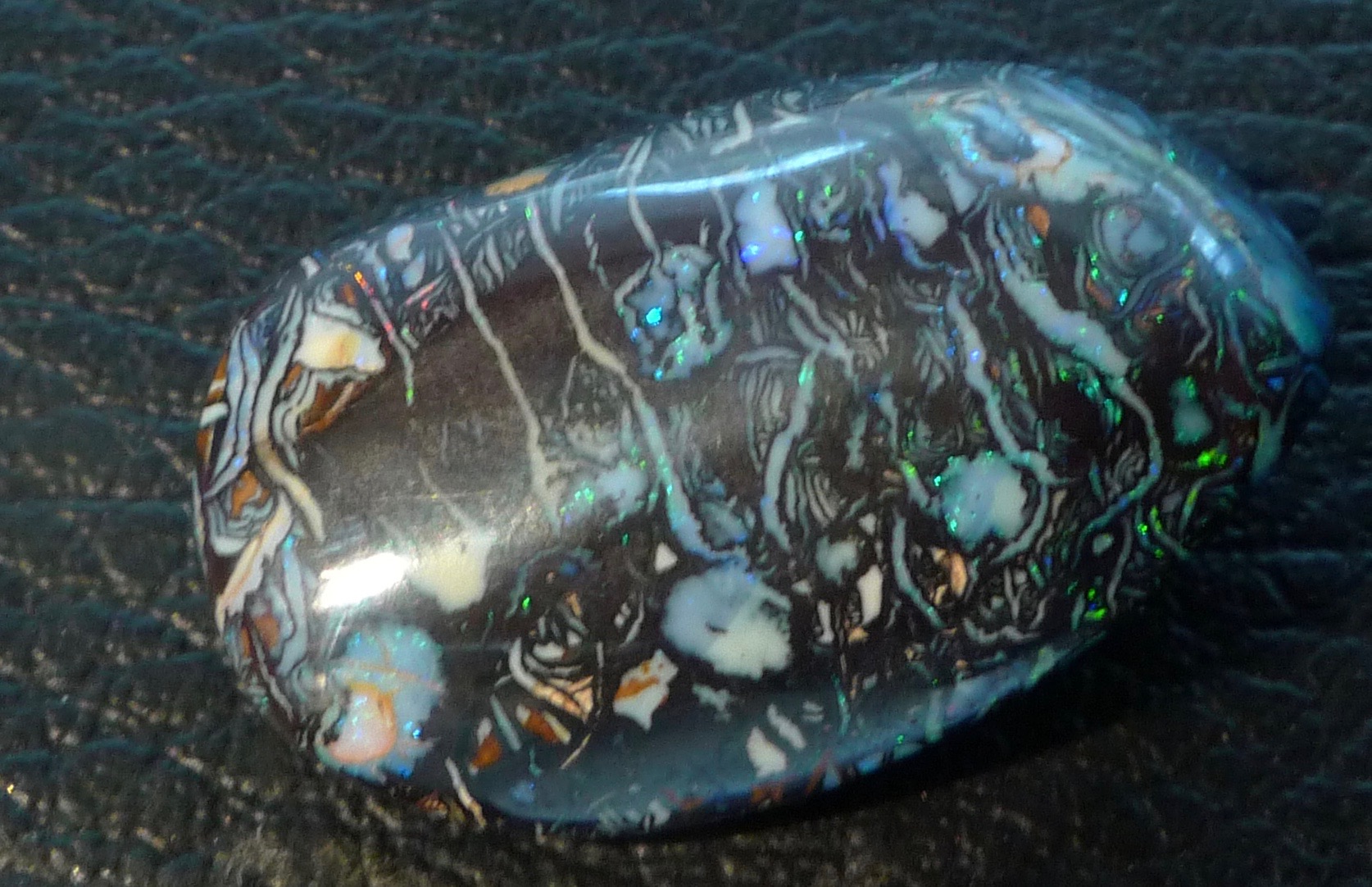 This opal is also from my collection and again shows an intricate pattern in the ironstone with beautiful flashes of opal. The back of this stone is almost all milky opal. 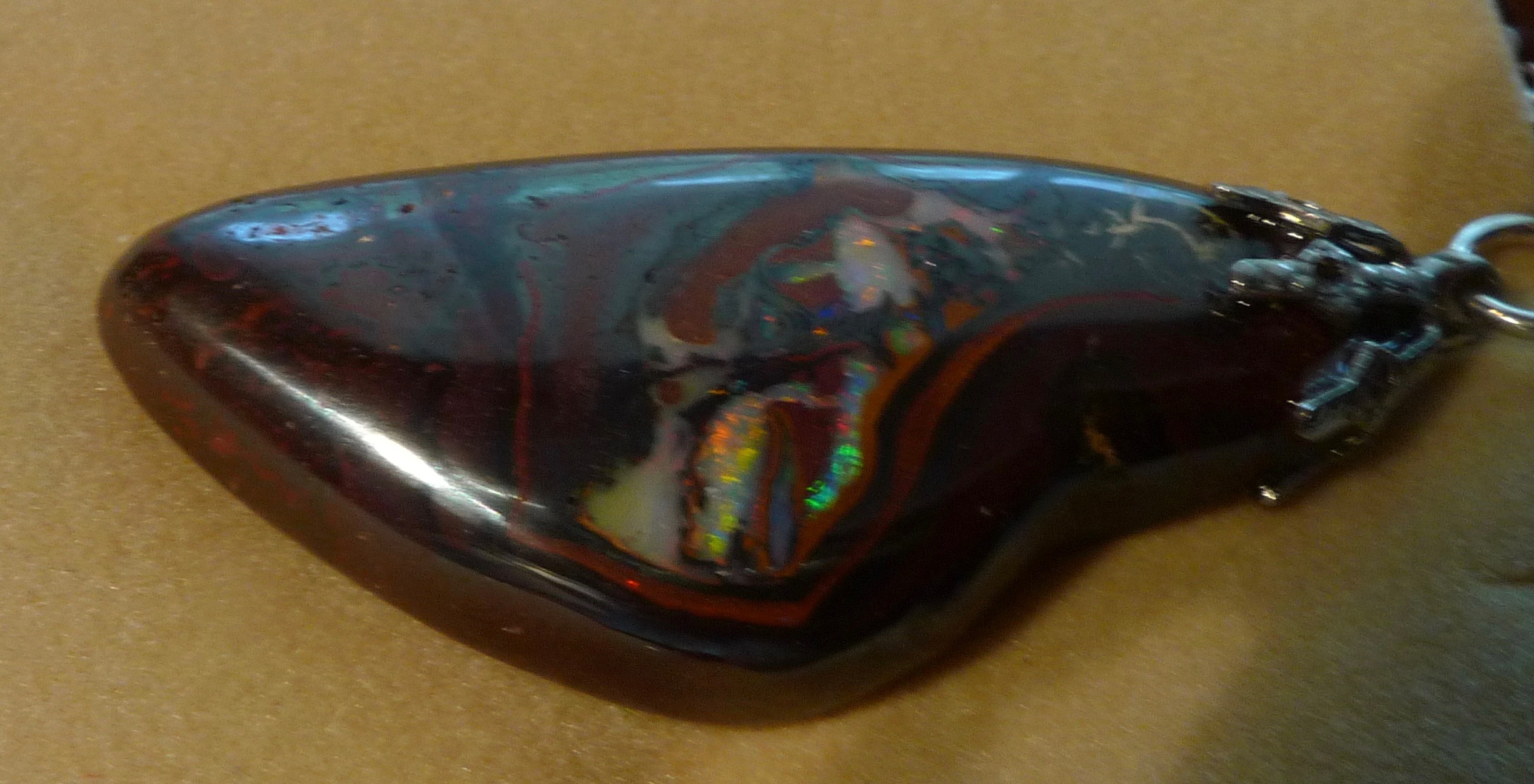 This lovely piece is mainly boulder with beautiful flashes in the middle.

Producing a gemstone from boulder opal is not always as straightforward as it is with an ordinary opal. Because the opal is usually present as a thin layer within the ironstone layer or as small specks embedded in the ironstone, special techniques are required.

When you first inspect a boulder you will have no idea whether or not it contains any opal. It will just look like almost any other rock. How can you find out if it contains opal?

You could take to it with a diamond saw and gradually saw off small sections at a time, but as most boulders are large and contain no opal, this would be very laborious and costly.

You would probably end up doing what the miners do. Smash into the boulder with a large hammer and shatter it into smaller pieces. This will quickly tell you if the boulder is opal bearing or not. Unfortunately you will probably wreck a lot of gemstones as you cannot control where or how the boulder will split.

On my first trip to the boulder opal field near Duck Creek in western Queensland, my cousin Ken and I found a lot of small pieces of boulder opal which had been left by the miners after smashing the boulders. These often had beautiful colour but were not considered valuable at the time. The miners were obviously looking for the thicker layers of opal within the opal.

If you are lucky to come across a piece of boulder with a thick vein of precious opal in it you will need to take care in cutting it.

Cutting and polishing a vein of boulder opal

If the opal is in the form of a thin vein it has to be cut quite differently than if the opal is spread throughout the ironstone .

These veins can vary in thickness from almost nothing to a couple of millimetres in rare cases. The veins are often wavy making cutting and polishing that much harder.

What you will be aiming to do is produce a stone with the surface being pure opal and the back being the parent ironstone. This will appear to be like a doublet but the opal will be naturally glued to the backing.

The first decision is to be which side of the opal will be the surface. How you decide this is anybodies guess. Looking at it from the side you will just see a thin vein of opal. If the top seems a little brighter than the bottom then I would take a punt and make that the top of the stone. That is, as long as you have enough depth of ironstone at what would be the bottom of the gemstone. You have to have enough ironstone to make a flat base for the gemstone and preferably the ironstone should cover the entire base.

Having decided which surface will be the top of the stone you now need to cut around the edge of the opal exposing the vein on all sides. Don't worry about the shape yet. You are just finding the extent of the vein, just like you do when cutting a doublet.

A word of warning which I should have mentioned earlier. Cutting boulder opal is a very messy business so get dressed accordingly because in a short time you are going to be covered in a brown mess which is very difficult to get off clothing. Also wear glasses or else you will find it hard to see with an eyeful of brown mud.

If the piece of boulder is of reasonable size the initial cutting can be done with the stone held in the hand but if it is small it is better to dop the stone as you will have much more control.

Having exposed the vein all the way around it is now time to tackle the top. It is best to use a reasonably coarse diamond disk or wheel to grind away the ironstone from the top. Use plenty of water or else you will not see when you are getting close to the opal layer. In most cases the opal layer will not be an even layer so you are only trying to cut away as much of the ironstone as you can without actually touching the opal layer.

Now it is time to get out the "Dremel" or other hand carving tool. Selecting a medium grit diamond carving head, grind away the rest of the ironstone from the top of the stone just revealing the opal layer.

Having made these decisions, you then can choose the outer shape of the stone. Remember shape is a very important factor in the value of an opal. Colour is, of course the main factor, but an ugly shaped stone will be hard to sell. If you have to cut out a bit of good colour to get a nicely shaped stone, then I think that is a good choice.

The next stages are the same as cutting any other opal. Using a very light touch and finer grit diamond tools, go over the surface of the opal removing any traces of ironstone or sand. Then, using 1200 grit wet and dry sanding paper remove all scratches on the surface and then finally polish with cerium or tin oxide. I know I am skipping over these most important phases but they are covered in more detail in other posts on this web site.

If the opal in the ironstone is interspersed as small patches or specks it is generally referred to as boulder matrix,

This much easier to cut but just as messy.

Usually the matrix is saw cut into a slab about 2-3 mm in thickness. You can then mark out the shape of the stone you wish to cut using a piece of thick aluminium wire. This mark will not wash off during the cutting.

The shape selected will be based on the pattern of colour formed by the opal. Having selected the shape you then proceed as for the cutting of a cabochon in any other material. Be careful though and don't use too much pressure or too coarse a wheel as pieces of the ironstone can easily break away from where it joins the opal, leaving pit-marks which are hard to remove.

Once you have finished to the sanding stage, extra care has to be taken. Polishing the ironstone is not always straightforward. The dark ironstone will readily polish but the lighter colours don't

The best results I have been able to achieve have been by using a well worn 1200 grit wet and dry sandpaper and then using 50.000 grit diamond on a leather polishing wheel.

Don't use cerium oxide or tin oxide as you will see tiny specks of the polishing powder embedded into the surface of the opal when you finish.

These tips are from my own experience in cutting boulder opal. I do not profess to be an expert and I am quite sure that other cutters will use different techniques and probably get better results than I do. I do know, however, that you can get good results using these methods.

To see some brilliant boulder opal click on the site Matrix and Boulder Opal.