A little while ago "Mac" contacted me with his theory on opal formation. I have my theory on this topic but it is good to keep an open mind as none of us were around when opal was formed.

Mac has given me permission to present his thoughts on the subject and he is currently working on a more detailed presentation which he hopes to publish later in the year. The following is Mac's story.

How are Sedimentary opals formed

We have two types of Opals, Volcanic and Sedimentary. The Volcanic is relative easy to understand. The Heat, Pressure and Material is supplied by an active Volcano, but in Sedimentary Opals the only thing that is present is the Material. There is no heat source and there is no depth to supply the pressure needed to create the fusion of materials needed for Opal to form, much less enough to get the Crystalline lattice formation to occur. Maybe I should have said there are two ways Opal is formed, one that is easy to understand, the other, no-one can explain.

Now le's take Opal Fossils. If heat and pressure were applied at depth then the heat and pressure required would distort the shape and formation of the fossil basically turning it from sedimentary to metamorphic or igneous deposits. That has not occurred. There has been some sort of thermal event in the Silica that has caused it to Flow, Seep and Inject itself into the insitu rock or displace other material that has taken the place of bone or living organisms and heat adequate enough to allow crystalline structures to form and cooled off quick enough to keep the nanospheres in place.

None of this explains the Background Radiation which occurs in Opal Formations.

What we have is multiple questions on the formation of Sedimentary Opals AND the answer must account for ALL Opal formations and the presence of Opal Fossils, the only CRYSTAL Fossils in the World. I am going to get sidetracked here and may repeat myself but bear with me.

How Important Are Opal Fossils?

Are they Unique, Rare or just plain Common?

Instead of being put on the Defensive and attempting to answer questions, how about we start at the END and work our way FORWARD!

How many Diamond fossils have you seen?

How many Sapphire fossils have you seen?

How many Emerald fossils have you seen?

How many Ruby fossils have you seen?

How many Amethyst, Citrine, Quartz or ANY CRYSTAL FOSSILS have you seen?

How rare? Well like the old saying goes, Show Me Another One!

Why is this important, because at that temperature most fossil material/structure should have been destroyed!

Rubys melt at 2049 degrees, Emeralds melt at 2570 degrees, Diamonds, depending on who you ask melt somewhere between 2700 degrees and 6000+ degrees if you ask the Diamond Association, in fact they say they don't melt but burn if oxygen is present, so it is evident that they take extreme pressure to form.

What conditions were different between Quartz/Corundum/Carbon/Feldspar gemstones vs. Sedimentary Opals? The Existence of Pressure and Heat! In Sedimentary Deposits heat under normal circumstances is not possible, otherwise the Sedimentary formations would have been turned to Metamorphic or Igneous Rock formations and destroyed any fossils.

Let's move to Volcanic deposits of Opals, those are absolutely understood, heat and pressure and presto you have opals, rubies, emeralds, diamonds, sapphires and the feldspar group but Sedimentary Opals are truly a conundrum and Geologist know it, to broach the subject exposes ignorance so they pretty much stay away.

All of this is relevant to the formation of Opals and Opal Fossils.Their melting points are actually very close to each other, so why are there no Other Gemstone Fossils?

What can we say about these jewels.

Ignorance, Superstition and Market Manipulation has priced the Opal Market for far too long, let's all get Real! Crystal Fossils outside the Opal world are nonexistent and opals/opal fossils do not reflect the prices that should exist. Maybe if people Understood their rarity and creation they would be more readily accepted. 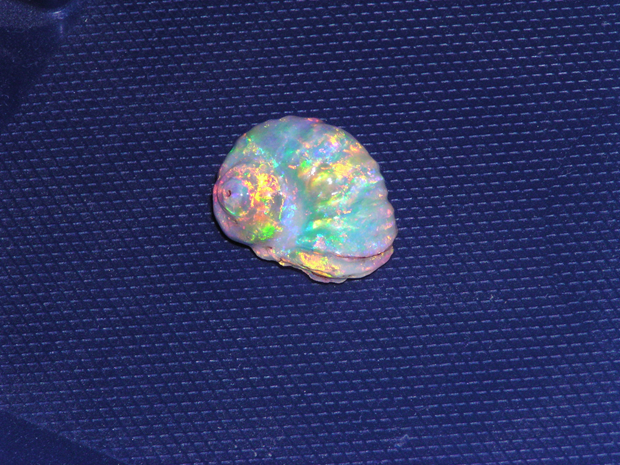 I will now get back on track. What I am writing here is a very Short explanation and I have available on request a detailed analysis and in depth explanations and examples that covers, CME, Micro Nova's, Moon Missions, Mars Missions, past CMEs, historical evidence, petroglyphs, geological, astrological, atmospheric, biblical, CIA (of course) - you get the idea.

So off we go on a, hopefully, education idea.

Let's start with the Culprit and work our way out. It is being discussed in multiple papers that our Sun is not as quiet as the people populating this planet think, the Carrington Event of 1859 is a classic example but let's say we had a Carrington Event on steroids about 110 million years ago, maybe our Sun is one of the multiple stars that Micro Nova or Coronal Mass Ejection (CME) periodically, as odd and destructive as that sounds it is my opinion that either/or is the likely culprit for the Sedimentary Opal Deposits. (Look to Mars opal deposits)

Either event would compress our atmosphere, especially at the pole areas; if this compression were enough it would produce Massive Energy Exchanges between the CMEs or Micro Novas and the surface of the earth, there are multiple examples of exactly this happening, unexplained of course. This process is called Vitrification and sometimes occurs with Lightning Strikes but these strikes would be much more intense. The in situ rock would not come under extreme pressure or heat, the Silica, mostly already in place, would be supplied by the exiting Inland Sea, the silica would melt, fuse with sun supplied nitrogen, local water and with the pressure and heat from the massive electrical storm, inject and force the Liquid Silica into the cracks, pores, voids and replace the existing material for most fossils, without destroying them. It would also supply the background radiation found in Sedimentary Opal Deposits, courtesy of the sun.

The full paper is about 60 pages long but this boils it down almost to an insulting simple point but it does have a point.

I hope this triggers some comments