The Lightning Ridge Opal Field has a large number of "mining locations' with very exotic names suggesting strange things happened in the past. Names such as "Deadmans, Revolver, P & O Jacks, Killing Yard, Hornet's Rush, Poverty Point and Frying Pan" can send the mind into a frenzy imaging why they were so named.

Others have names which clearly indicate what they were named after. Areas such as "Three Mile, Frog Hollow, New Chum, Bob Bishop's Rush, Potch Point and Nobby Hill' give a clear indication of why they were so named.

I don't know if anyone knows the reasons why some of the names were chosen, which is a great pity, but there is one area with a name whose story is fairly consistently told. That area is "Lunatic Hill". 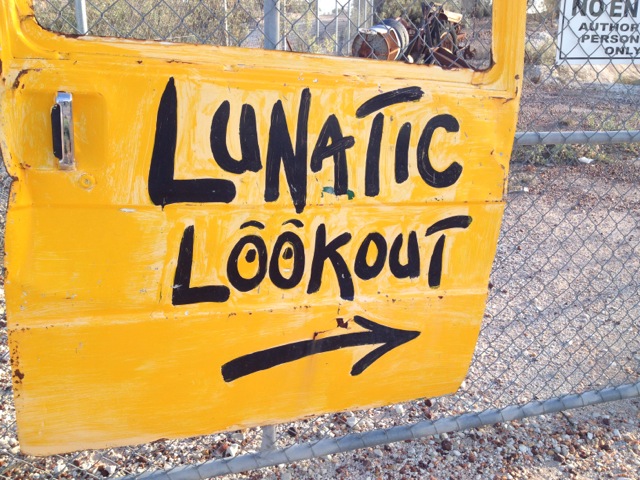 The Yellow Car Door Tour has signs directing you to Lunatic Hill.

At the time of its naming much of the mining was being carried out at the Three Mile Field, named because it was about three miles from the town. The depth of mining here was around two to six metres. Just out from this field there was a fairly large hill about twenty five metres high and no-one even considered digging a hole in it as you would have to dig at least twenty seven metres deep to hit the opal level. At that time digging was done by pick and shovel with all of the mullock being raised by a hand driven windlass. The ground was very hard and a great effort would be needed with no guarantees you would get anything except a lot of blisters and a sore back.

According to some records some miners did have a go but gave up at about fifteen to eighteen metres and they were referred to as "Bloody Lunatics". Most of the miners did not believe there was any opal there. From this auspicious start the hill had a name, "Lunatic Hill".

Its history did not stop there. Ion Idriess, in his book "lightning Ridge" tells a story of when he found some opal on the Lunatic Hill. There is a plaque at the site in honour of Ion Idriess. 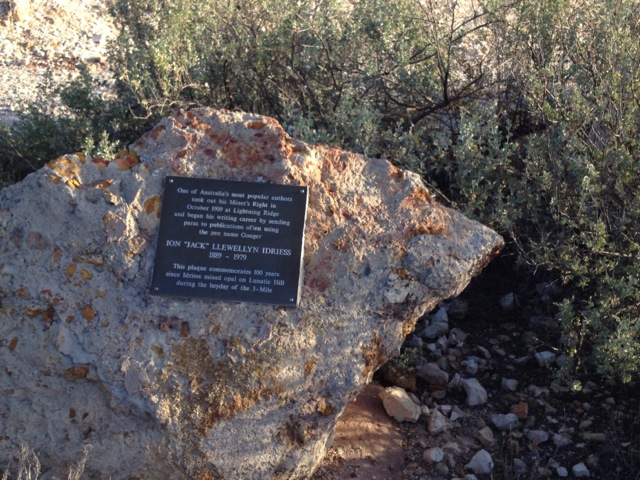 Plaque in honour of writer "Ion Idriess" at Lunatic Hill

"Jack' as he was called on the field, had set off to Lightning Ridge after a stint at boundary riding in New South Wales. This meant gathering all his belongings in his "Matilda" and walking to The Ridge from beyond Walgett. This is a mere 100 km or so, which pales into insignificance when compared to the early miners who walked with all their belongings and equipment from White Cliffs to Lightning Ridge when word got out about opal being found there. Still it was a big walk, but Jack had been fired up with a bout of opal fever. When he got there he bought his equipment and set up camp and then set about digging a hole. According to him he sank" duffer after duffer". A duffer is a hole that didn't find any opal.

Later, together with a man called Tom Peel, Jack started mining at the Three Mile Field. They used to see an old man trudging by each day. He would head off in the morning on his way up the hill and reappear each evening looking more and more despondent. Apparently he used to spend the day looking sadly at an old abandoned mine where he was convinced there was opal, but he was too old and frail to dig for it. He was hoping someone would come and dig it out for him. He began to annoy Tom and Jack, as there were many areas on the flat where could dig but apparently he had a bee in his bonnet that there was opal to be found on the hill. Tom and Jack complained that watching the old man was"taking away their appetite".

One day, after heavy rain had stopped work on their mine at Three Mile, they decided they had had enough of old "Dad" as they called him, and decided to shut him up by rigging a windlass up over the old shaft and digging down to the second level to prove to him there was no opal there. Waiting until after everyone else had left camp they headed up Lunatic Hill. They didn't want anyone else to see them as they would be laughed at. They commenced mining and after digging down two metres from the bottom of the existing shaft, they met sandstone and had to dig through a further eight metres of this It was very tough going but they did strike a second level but there was no sign of opal and they declared it a duffer. And so they packed up, told Dad, and left the hill. But Dad still kept going up to the hill each day still convinced in his mind there was opal there.

After a further month, Jack decided that he would have one more go. He and Tom would drive the first level, throwing the mullock down the shaft they had dug to the second level. When this was full they would pull up hopefully convincing Dad there was no opal there. In three days they had done this with no opal in sight. Tom started retrieving their tools but for some reason Jack kept chipping away with his pick in a very confined area. I quote from his book "Up near the roof, through the greyish white opal dirt, several little rusty looking bands had come in, like a drip of red dust.I chipped the bands with the chisel point, they felt gritty. This was fairly interesting.The air was terribly hot.There was hardly room to breathe. Jamming the spider into the wall, I lay there gouging steadily in, scraping the fallen earth away by hand, just able now to gouge in under the roof. Click! The old heart missed a beat. I stared, then slowly held the candle to the face. A bead of dancing orange was glowing from the face"

They had found opal where no-one believed they would. They found five small stones and having shown Dad, went back down for the night telling him to tell no-one. He was so excited he couldn't resist and the next morning they returned and found chips of opal all around the face. They had been ratted as soon as the word had got out. Not only that but claims were going up all around them and to make matters worse, old Dad had not marked the claim properly and others now had claimed the area adjacent to where they had found the opal. What a letdown.

Not long after Dad died down the hole but at least he had been proven correct. There was opal on Lunatic Hill.

This was in the 1930's and the miners did pull quite a lot of opal out of the hill.

But that wasn't to be the end of the story of Lunatic Hill.

The Barclay Brothers gained permission to open cut the hill in the late 1960's and at one stage there were around 30 claims operating on Lunatic Hill. 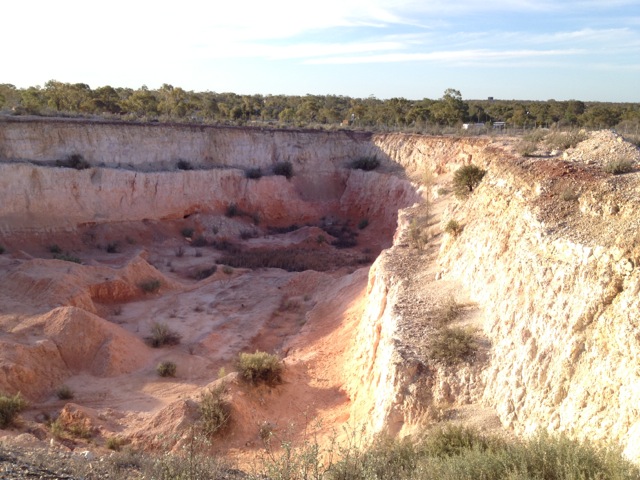 In 1986, around the time that Halley's Comet was seen in the skies over Australia, the Lunatic Hill syndicate found the largest recorded"black opal nobby". Before trimming it was 2020 carats and was 110mm x 66mm x 63mm in size. For more information and a photographs of this nobby that was named "Halley's Comet" click here.

While we in Lightning Ridge we met up with "Brian", a local 84 year old identity, who was still mining at Lunatic Hill. 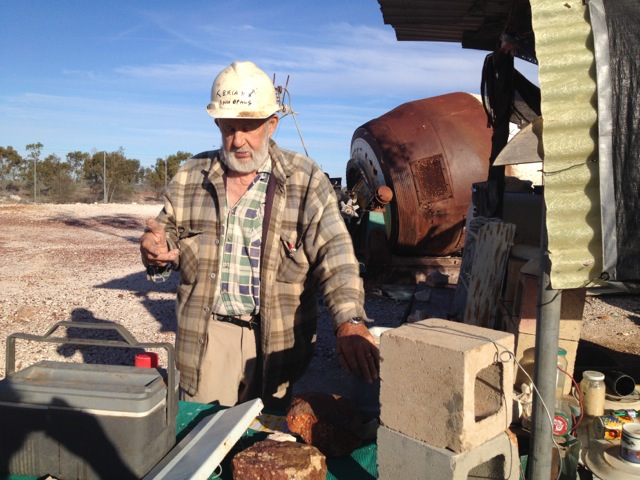 He told us that a syndicate of 12 miners had been formed to open cut Lunatic Hill presumably before 1986. He was asked to join but was superstitious of the number 13 so declined the offer. The syndicate apparently poured huge amounts of money into the open cut and were on the verge of giving up, having found very little opal, when they struck it big time. According to Brian, they found over $130,000,000 worth of opal making it one of the richest areas at Lightning Ridge.

Lunatic Hill today is a large open cut although much of it has been back-filled. You can still see the remains of original diggings in the side of the cut.

For more photographs of Lunatic Hill and Lightning Ridge click on "Photos".

The story of Lunatic Hill is certainly a strange one and shows that "Opal is where you find it". No one can foresee where it is even today with all our scientific knowledge. There are many stories about newcomers to the fields asking the old timers where to dig. Quite often they were told specific spots where the miners believed there was no hope , and in some cases the newcomers found opal precisely in that spot. This was pretty much the story of Lunatic Hill.