How to find opal in Australia's Opal Fields

It isn't easy, as a fossicker, to find an opal nowadays but it is not impossible. You are going to need some luck and a lot of patience, but it can be done. It is not much use wandering over the mullock heaps on the opal fields as many thousands of people have already done this. This post will, I hope, help the everyday tourist improve his or her chances of finding a precious opal.

Brief History of the opal fields.

In order to improve our chances of finding an opal it will help to remember what it would have been like in the early days on the opal fields. Opal was usually discovered by someone, usually not looking for opal, picking up a stone that shone in the sun. This stone would have broken free of the earth where the opal layer broke through the surface on the side of a hill. Opal is a glassy looking stone and will glisten when the sun hits it so is easily seen.

Once discovered it was not long before many people would arrive looking for opal. Soon thousands of men would be scouring around, digging holes everywhere down to the opal layer and scattering their dug material in mullock heaps everywhere.

Some were successful. Many were not as a lot of the holes dug did not produce any opal at all. Unfortunately we do not know which holes produced opal.

In these early days the miners were only interested in the best quality opal. The bright shining red or orange opal would be treasured and stored away and often the green and blue coloured opal discarded or collected and sold by the sackful for a pittance. The early opal market only wanted the first class stones. Nowadays any type of opal has a market and it is this discarded opal that we, as fossickers, are looking for. 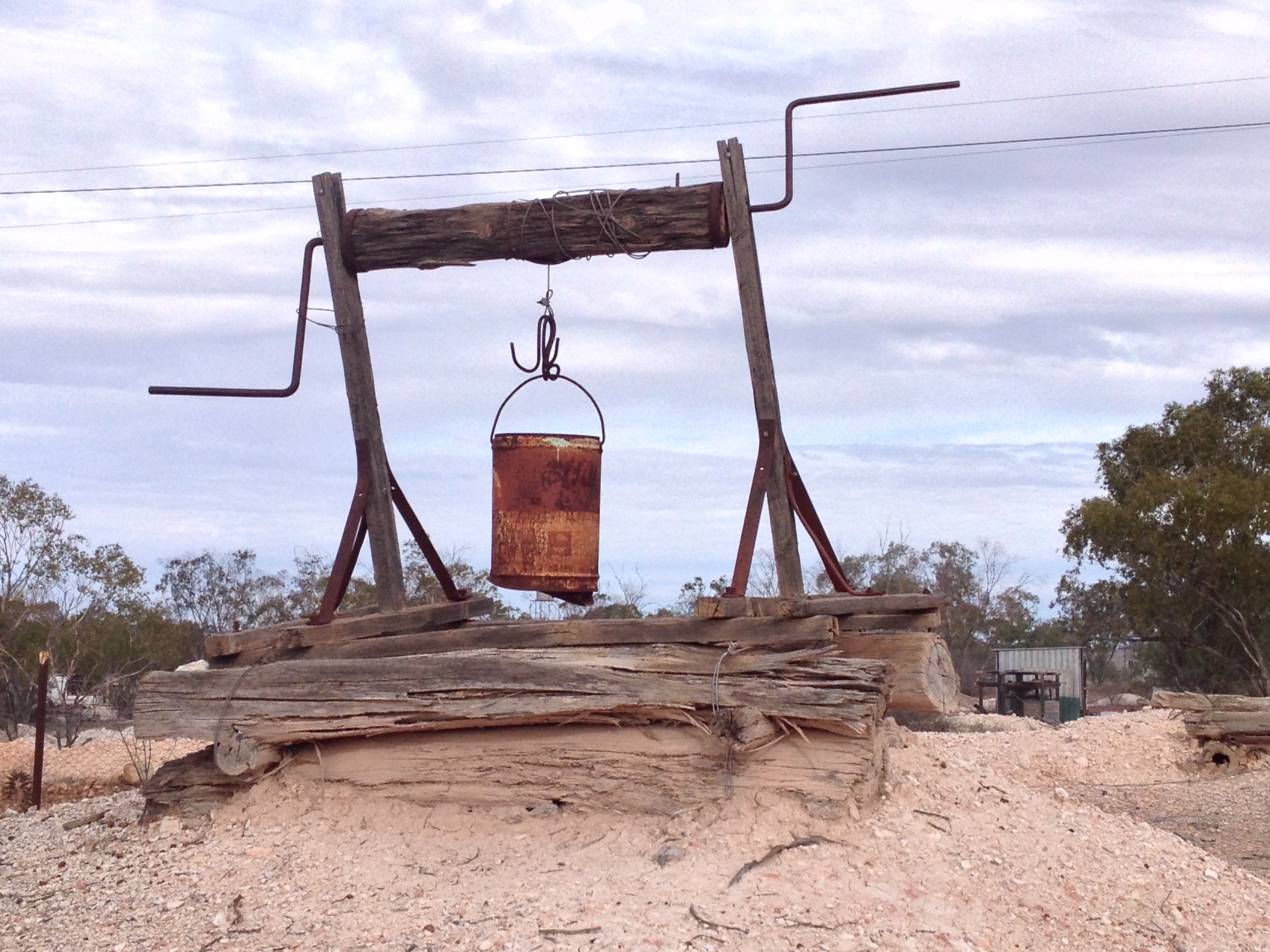 Early mine at Lightning Ridge

The early opal miners obviously missed a lot of good opal too. The early mines consisted of a vertical rectangular shaft dug down to just below the actual layer of material where the opal is found and then a series of horizontal tunnels radiating out in all directions. These tunnels were of minimum height as the miners did not want to remove vast quantities of dirt which did not contain opal. The miners would be kneeling on the bottom of the tunnel or drive as it was called and using a short handled pick to break away the earth. It was very dark down there and they would have used a candle stuck in a a spike of steel which was driven into the side of the drive. This was there only light and while candle light is quite good for spotting opal, it does cast a lot of shadows and so the miners could easily miss a piece of opal. 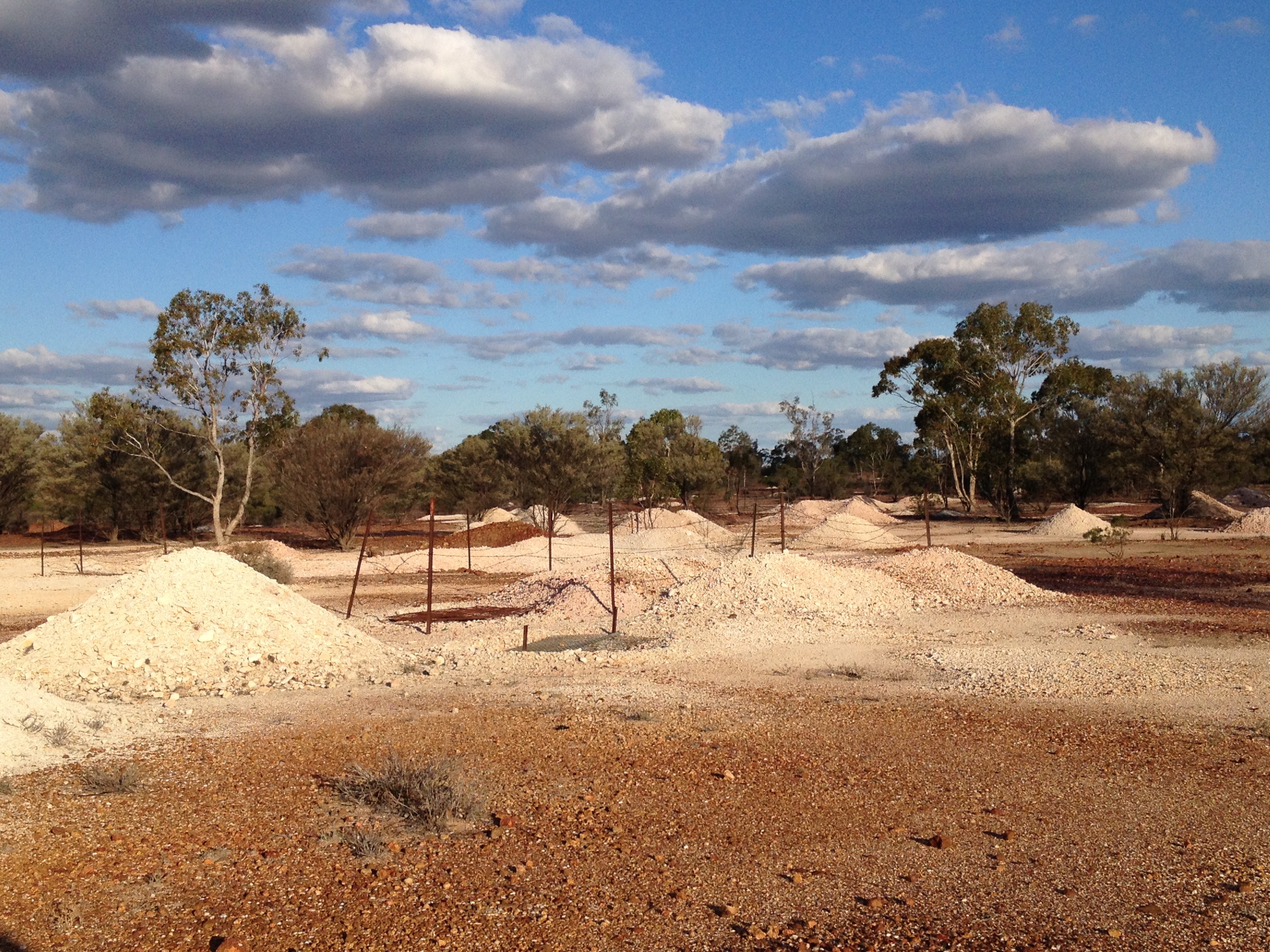 The material was dug out and put in buckets and hauled to the surface by the miner and poured out onto the mullock heap where the miner would check to see if there was any opal in the bucket. Again it would be easy to miss some as the opal could be covered in clay.

Any opal found by the miners would be stored in a container or bag and taken back to camp to be checked later. Most miners did not publicize their finds for fear of having their claims "ratted" by thieves while they slept.

Many of the miners camped well away from their claims because there was not enough room on the claim to dig as well as camp. Quite often they would sit around the camp fire at night and snip the edges of any likely looking potch or stone they had found. These chips would fall to the ground around the campfire and be left there as they had no value then.

This brief description of life on the opal fields in the early days gives us some clues as to where to look for our elusive piece of opal.

First clue - Go to where opal has been found

If you have limited time there is very little point in trying to find opal in areas where it hasn't been found. True it would be great to find a new field, but you have to remember thousands of men have searched over vast areas already and not found any so you would have to be really lucky. The best chance is to head for one of the many opal fields where opal has been found. There are many of these and almost all are very accessible. Andamooka, Coober Pedy, White Cliffs, Lightning Ridge and Yowah all have sealed roads leading to them and good camping facilities and so are easily accessible.

Remember that the mullock heaps are where the miners dumped the material from their drives. If they missed any opal this is where it could be.

At Lightning Ridge and Coober Pedy, modern day miners have used front end loaders to pick up entire mullock heaps and put them through huge sieves on the back of concrete mixers and washed the remaining material to recover missed opal. One assumes they were quite successful as this is not a cheap way looking for opal.

At Andamooka they have also put mullock heaps through a conveyor belt under ultraviolet light in a darkened room. The opal fluoresces under this light and can be pick out by experienced watchers.

Also countless fossickers have traversed the remaining mullock heaps and picked up any opal pieces on the surface so there is little chance of us finding any on the surface. I have been lucky enough to find some nice crystal opal on the surface of heaps at White Cliffs some years ago but the last time I was there I had no such luck. The best time to try is after heavy rain as the rain washes away any dust on the suface and can expose any remaining opal. You do need to wait a hile after heavy rain or els you will end up about 100 mm taller as the mullock heaps and surrounds are all clay and this sticks to your boots like you would not believe.

Another method is to randomly select a mullock heap, sit down and carefully shave away the surface looking out any glistening piece of opal. You will need patience doing this and you are relying on luck in that you are hoping this hole actually produced opal. In the past if you found a piece of good opal on any heap you would select that heap to dig in. That is not likely nowadays. Having a bowl of water nearby to wash any stone in is also a good idea.

A point to remember is that the inside material in the mullock heap is most probably from the shaft and therefore unlikely to contain any opal. When the miners dumped the mullock it would cascade down the sides and hence the most likely place to find any opal is on the edges of the mullock heap.

Another thing to remember is that the opal hole is on the inside of the mullock heap. Most fossickers look around the outer side because they are afraid of falling into the hole. This can happen and some holes are very deep. This means that the inside of the mullock heaps are very much less fossicked than the outer sides. I had heard of a fossicker at White Cliffs who had found some nice opal by digging on the inner faces. He made sure he covered the hole with some sound timber so he couldn't fall in. This may be worth a try.

Just make sure you are not on a current claim when you fossick on mullock heaps. Miners do not like this if you do not have permission. You can recognize a current claim as it will a post at each corner with a metal tag showing the claim number.

Sometimes modern miners will let you fossick on their mullock heaps while they are dumping material from their suction machines. You do have to be careful though as you can be hit by a pile of opal dirt as it is discharged. Do ask first as many miners do not like fossickers.

In 1966 I visited the Duck Creek opal field in Queensland with my cousin Ken. We were told to check out old camp sites and set out to do just that. At that time they were easy to find as there were piles of old ash and burnt wood well away from the claims. We sieved around the campfire and found quite a few chips of opal. Some were burned as the miners had chipped them into the fire but there were a few that had not suffered that fate. So, it is worth a look if you can find any old sites.

Fourth Clue - Look where mullock heaps have been spread 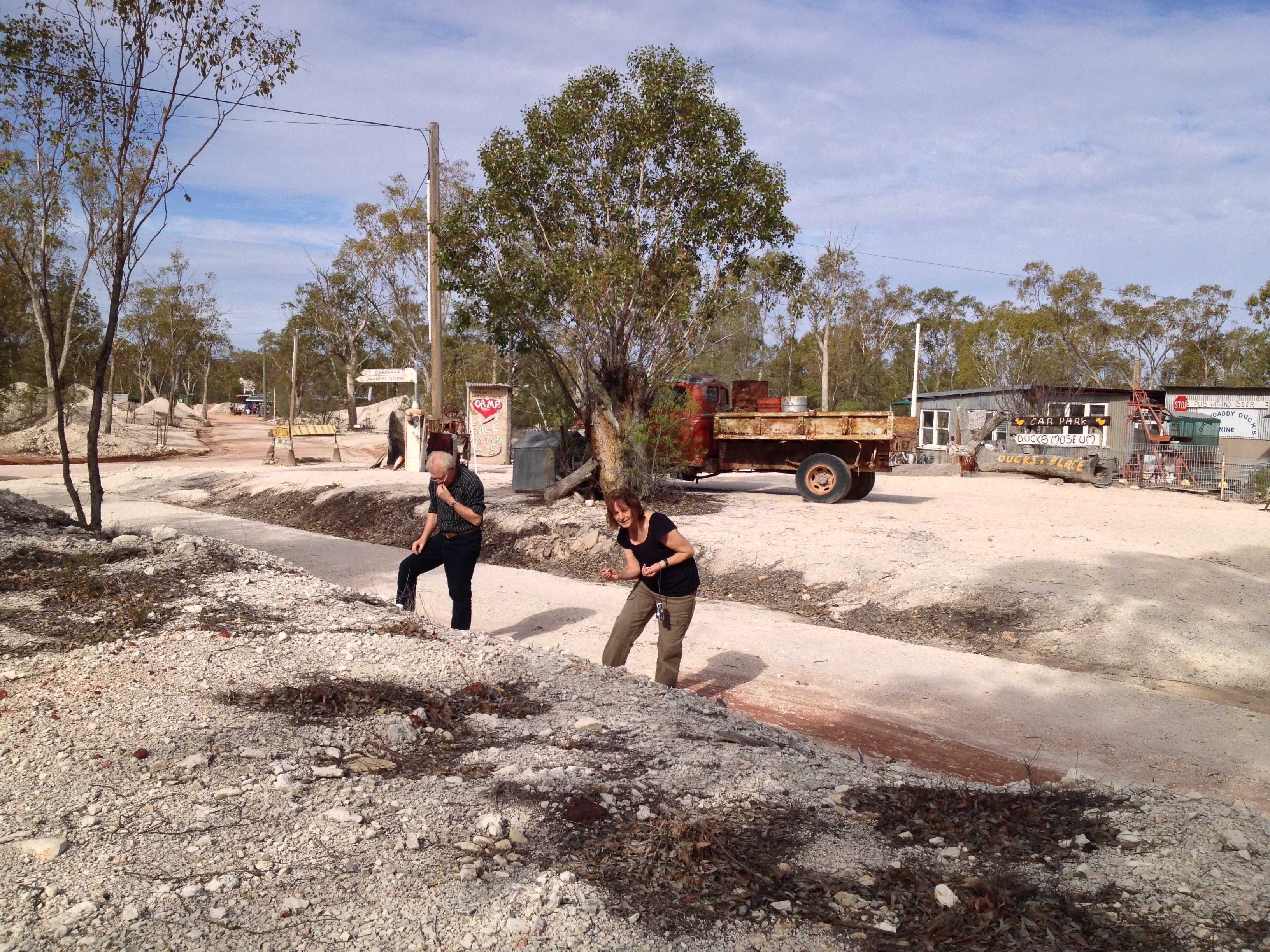 In all of the opal fields tracks and roads are constructed by picking up abandoned mullock heaps and spreading the material on the track surface or even on the edge of a sealed road. Always keep your eyes peeled when walking along a road or track especially after rain. You never know what you will pick up. I have found some very nice pieces of matrix opal at Andamooka on the residential road surfaces. (see below) 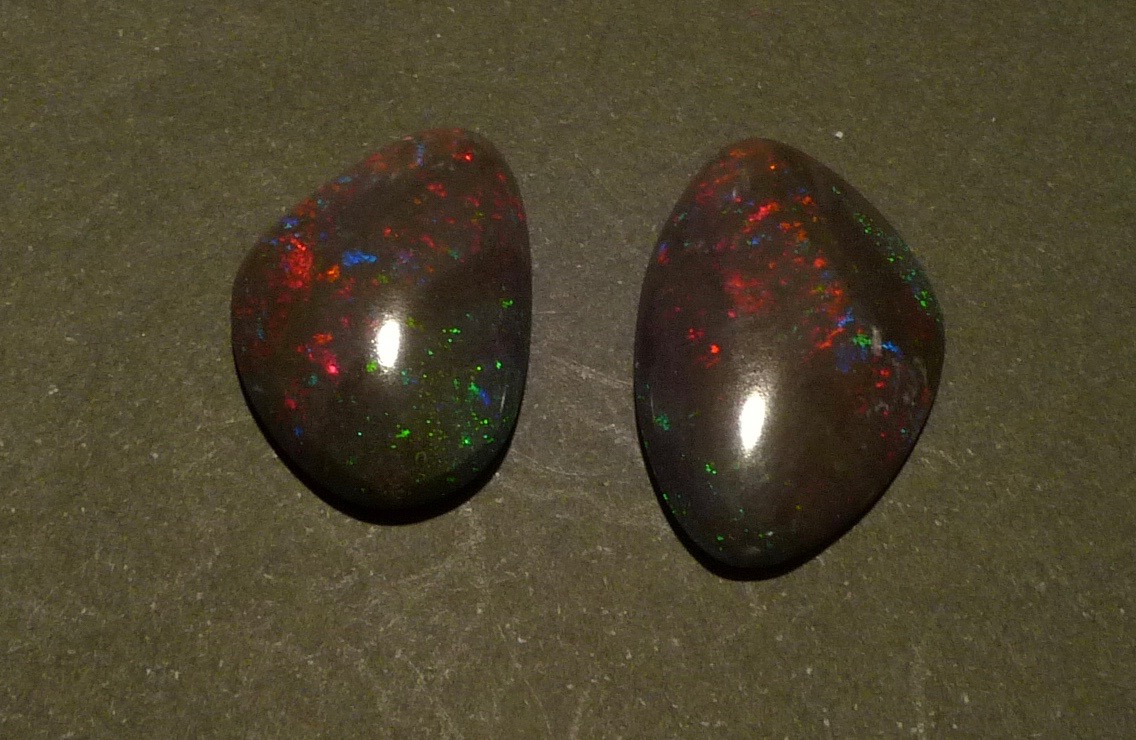 I was also lucky to find a nice green crystal opal on a track near a monument at Grawin. So, wherever you are, look at the ground. Opal can be anywhere.

At Grawin, near Lightning Ridge, the modern miners carry their mullock to a large dump site just alongside the main road in. You are allowed to fossick here and you will often find quite a few people doing just this. It is a very interesting way to spend a few hours and you never know your luck. 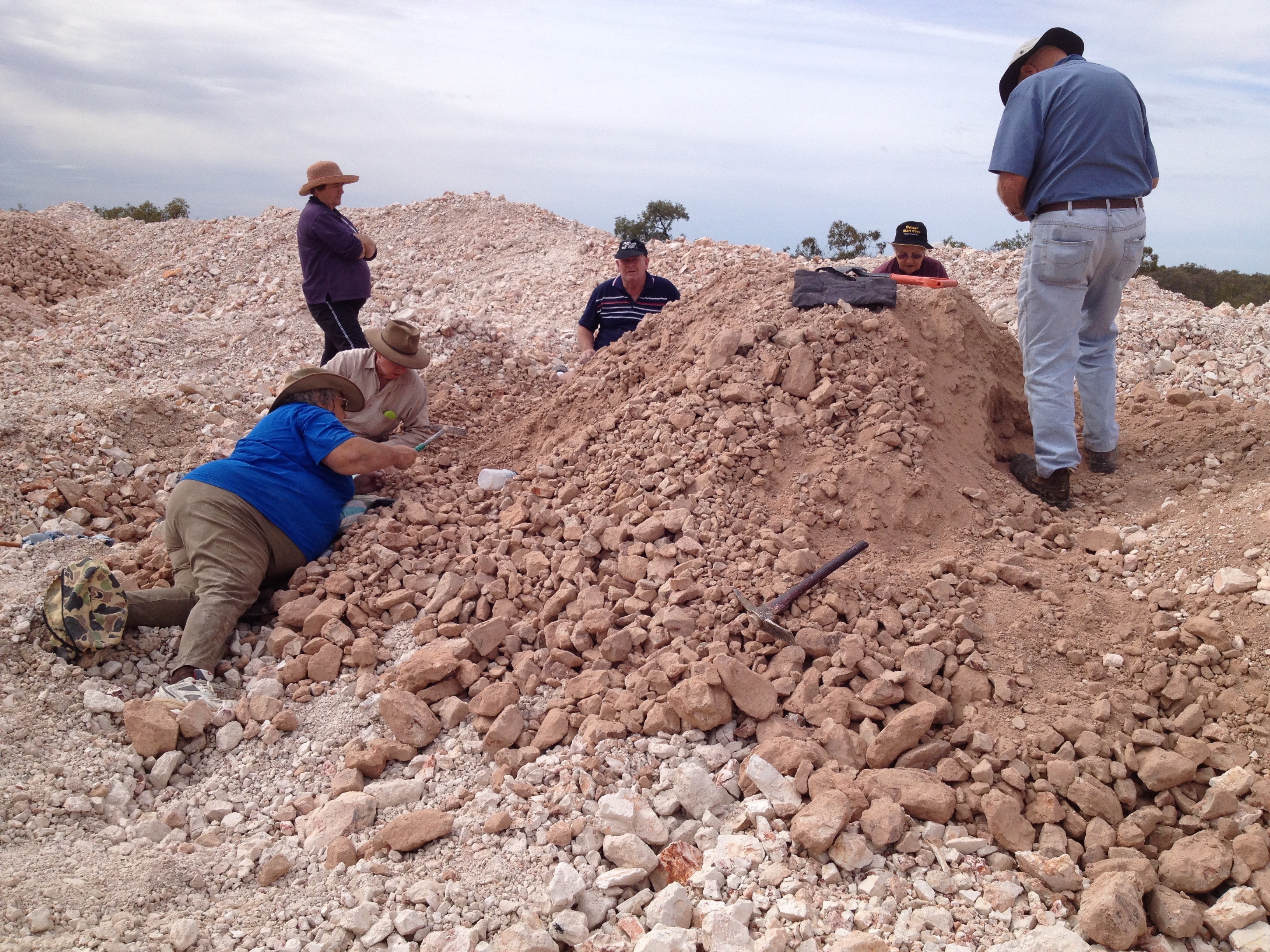 Fossicking on the dump at Grawin

Fifth Clue - Look where water has scored through the opal fields

Whenever it rains the chances of finding an opal improves, as the rain washes away any dust and will make the opal easier to recognize. Heavy rain also causes usually dry creeks to run and causes scours among the heaps and edges of roads and on the sides of mullock heaps. These areas are often worth a look as the flowing water can dislodge an opal that has been buried for years. I have found a few pieces in these locations at a number of the fields.

Another place to look is in the campground you are staying in or in any area where campers have been in the past. I found a lovely topaz in the campground at Lightning Ridge. Someone had obviously been careless and dropped it. I have also found some nice small pieces of opal in this area..

Opal can be anywhere in the opal fields. You will need patience and luck to find it but it can still be found. I just love wandering around with my eyes glued to the ground. I've never found a really valuable opal but I have heard many stories of those who have.

If you are not looking you will not find one. Best of luck