Charlie Nettleton has been attributed as having sunk the first opal shaft at Lightning Ridge.

It is commonly believed that Jack Murray, a boundary rider on Dunumbral Station, near Angledool NSW, was the first to find opal in the Lightning Ridge area, in a dry creek bed and around tree roots while he was setting rabbit traps in 1900. His neighbours, the Ryan family learnt to cut and polish the opal he found.

In 1901, there was a very bad drought in and around the White Cliffs Opal Field. This was the only opal field in operation at that time other than the spattering of mines in Queensland. Many miners found the going too tough and left White Cliffs. Among those miners that left was a miner called Charlie Nettleton. He came from from Bathurst originally and was an experienced gold miner before trying his hand at opal mining in White Cliffs.

Charlie Nettleton, after leaving White Cliffs, returned to Bathurst. While there he heard rumours that gold had been found at Angledool, just south of the Queensland border. Being an old gold miner he quickly headed off to check. This would not have been all that easy in 1900. He had little money, there were few roads and very little transport. It is most likely that he walked from Bathurst to Angledool. I base this on the fact that later he walks 700km from Lightning Ridge to White Cliffs in order to sell his first parcel of black opal.

In September 1902, according to research carried out by the well known opal writer Len Cram, Charlie Nettleton met the Ryan family at Angledool and saw his first black opal, presumably that found by Jack Murray.

At around that time, Joe Becket, the Innkeeper at Weetalibah, got together a seven person syndicate and they agreed to finance Charlie Nettleton in a search for this black opal. They had no idea of its value but obviously believed it would be of value and they wanted to be in it from the beginning.

Charlie Nettleton selected as the most likely spot to sink a shaft what is now called McDonalds Six Mile field. What made him select this site no one knows but he did. He sank a shaft down to 55 feet (17 metres) following a natural slide but did not find any opal. As with a lot of opal miners, Charlie Nettleton abandoned the shaft when he did not bottom on opal. There is also no evidence that he sank any further shafts in this area. There is a plaque erected on the site of this first shaft. See attached photograph. 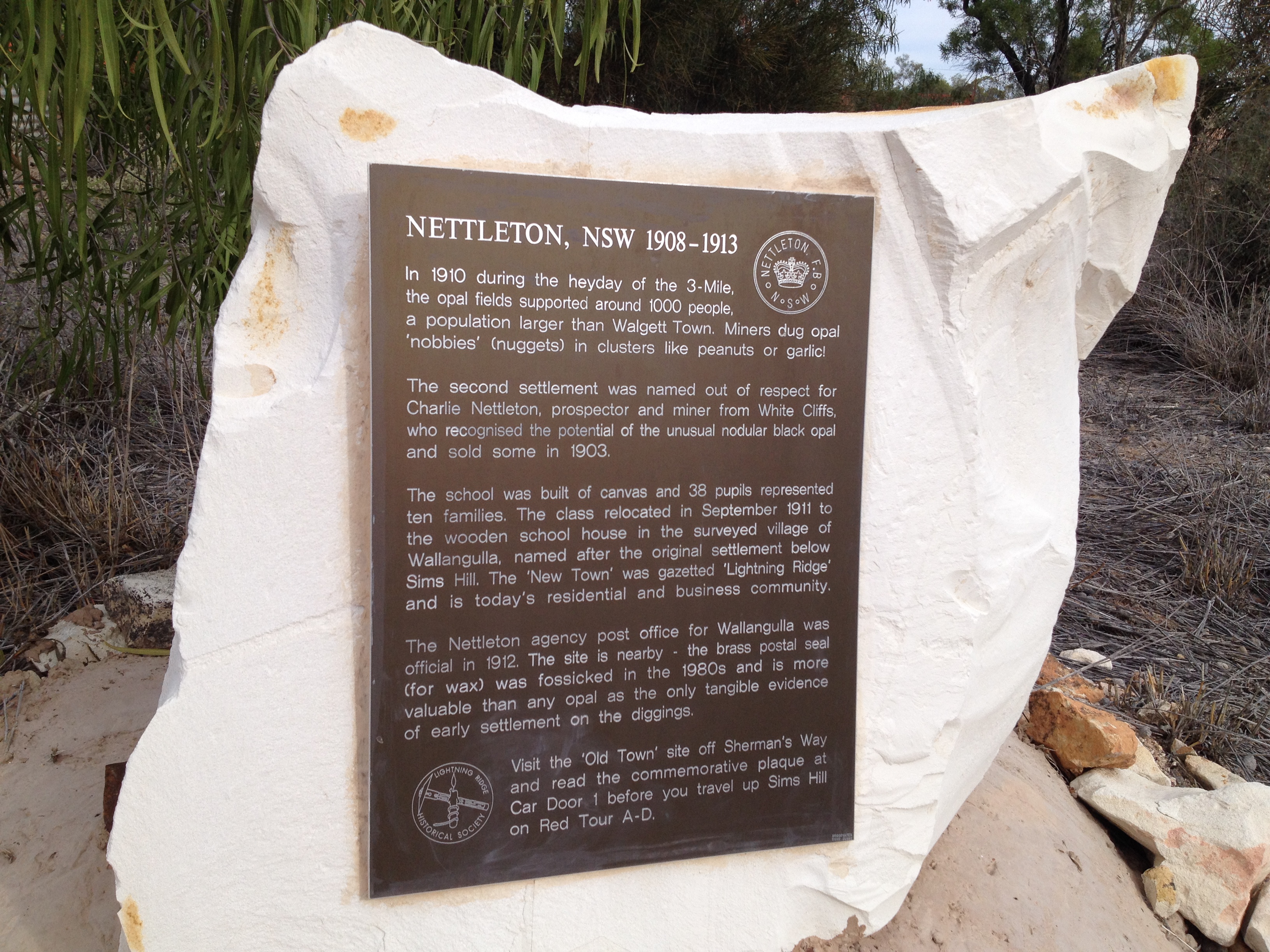 In 1903 Charlie Nettleton moved to the "Shallow Nobby" field where Jack Murray was mining. The syndicate he was working for soon collapsed having had no success. Charlie was on his own.

He had a bit of luck and soon had collected a parcel of opal ( 100 ounces according to E F Murphy). He sent the parcel off to some jewellers in Sydney who offered him ten shillings for the lot, saying it was practically worthless. He did not accept this and history records that he and Jack Murray set off on foot to the White Cliffs opal field where he knew there were buyers and where he would get his best price. Now White Cliffs was a mere 700 km away but this did not deter them.

When they arrived at White Cliffs they sought out E F Murphy who was buying opal on behalf of Tullie Wollaston. See White Cliffs Opal Fields Early days. I quote now from E F Murphy's book " They Struck Opal". " On 11th November , 1903, Charlie Nettleton, prospector of the Lightning Ridge opal field, came to me at White Cliffs with a parcel of opal of an entirely new variety - very dark, although it did have some very good colour. He had sent 100 ounces to Sydney and had been offered 10 shillings for it, its being considered too dark for commercial value. Personally I thought the stuff had possibilities, and wanted Mr Wollaston to see it, so I bought it. Charlie returned to the Ridge .........to await further news. When Mr Wollaston received the parcel, he endorsed my opinion and said to go on buying the opal, and that he would introduce it. I then wrote to Nettleton, telling him I was prepared to buy all they produced, and until March 1905, I continued buying by post, then decided to visit the field for myself.

Apparently E F Murphy paid 15 pounds for the parcel which was much more than the 10 shillings offered by the Sydney merchants and substantiated the decision to walk to White Cliffs and back. I am not sure there would be many people today who would do this. They were a tough old lot those Australian opal miners.

In 1904 there were 14 men at Lightning Ridge. In 1905, good opal was found at Sims Hill. A small town soon sprung up as miners flocked to the area. It was later called "Old Town" when in 1907, "New Town" was established on land least likely to be opal bearing.

In 1907 a good find was made at 3 Mile Flat by Archie Gillespie and 2 others. Again a settlement sprang up and was called "Nettleton" after Charlie Nettleton.

Charlie Nettleton is largely known as the founder of Lightning Ridge and certainly without him, the area may have had a different history.