Wooli Beach - How to find Sapphires

It was late May and the weather in Melbourne was getting colder and wetter. It was time to escape north to a better climate and to do some fossicking and fishing.

Barbara and I packed the caravan and Hilux with all of the essentials for an unplanned trip. Plenty of food, the kayaks, fishing gear, gold detector, gold pan and sieves just in case we ended up in an opal or other gem-field. As if we wouldn't?

Our first stop was Koondrook, a small town on the border of New South Wales and Victoria, not far from Kerang. It is where the Gunbower Creek runs into the Murray River. The area abounds with wild-life with all sorts of wetland birds and superb kayaking for much of the year: unless they stop the flow of irrigation water. This they did just as we arrived. As a result the Gunbower was just dry mud and all we could do was stare at a tree strewn jumble covered in mud. That was the end of any kayaking at that location.

We stayed a couple of days doing a bit of fishing but to no avail, so we decided to move on up north into warmer weather. Our next stop was at a small town called Ardlethan where there was free camping in the main street opposite a very nice coffee lounge. After talking to the locals in the Men's Shed I learned that there was an old tin mine just outside of the town, so I set off to check it out. You can often find all sorts of gemstones on mullock heaps. I didn't find any but did pick up a few quartz crystals and a couple of samples of tin ore.

The next day we headed for Dubbo and then Coonabarrabran. This latter town is located near the Warrumbungle Range which is a great place to fossick for gemstones including quartz crystals, fossils, opalized wood, agate, jasper and even opal. The opal that is found here occurs in the cavities in trachyte rock at Tooraweenah. The opal is usually very small but has brilliant colour. There had been a very large fire in the Warrumbungles in January this year and most of the area was closed, so fossicking was out of the question.I was lucky enough to get a few small samples from the Crystal shop just out of Coonabarrabran. This shop is well worth a visit if you are in the area as it has a free display of minerals, gemstones and fossils that are found in the Warrumbungles. There is also a shop where you can buy gemstones and jewellery and at the time of writing this,you can even buy the shop.

From here we ventured on to Moree and then on to Bingara, not far from Inverell in the New England area. This area is very famous for its sapphires, topaz, garnet, agate, jasper and even diamonds. Gold was also found at Bingara and I spent an afternoon panning and using the detector but found only two small specks of gold. It didn't really matter as it wasa lot fun and the weather was good too. We did a bit of kayaking and fishing in the localriver which was also good fun. Bingara is famous or should I say, infamous for theslaying of a group of aborigines many years agoknown as the Myall Creek Massacre. This massacre is recognized at a ceremony on the Queen's Birthday weekend each year.

From Bingara we headed for Grafton and then to a small coastal village calledWooli. This town on the Wooli Wooli river is well known for its fishing but not for its gemstones, however this was where we obtained some lovely sapphires and I will explain how.

We set up camp just opposite the river and the next day another couple set up quite an elaborate camp alongside us. They were Bruce and Yvonne who usually reside at Ballina. 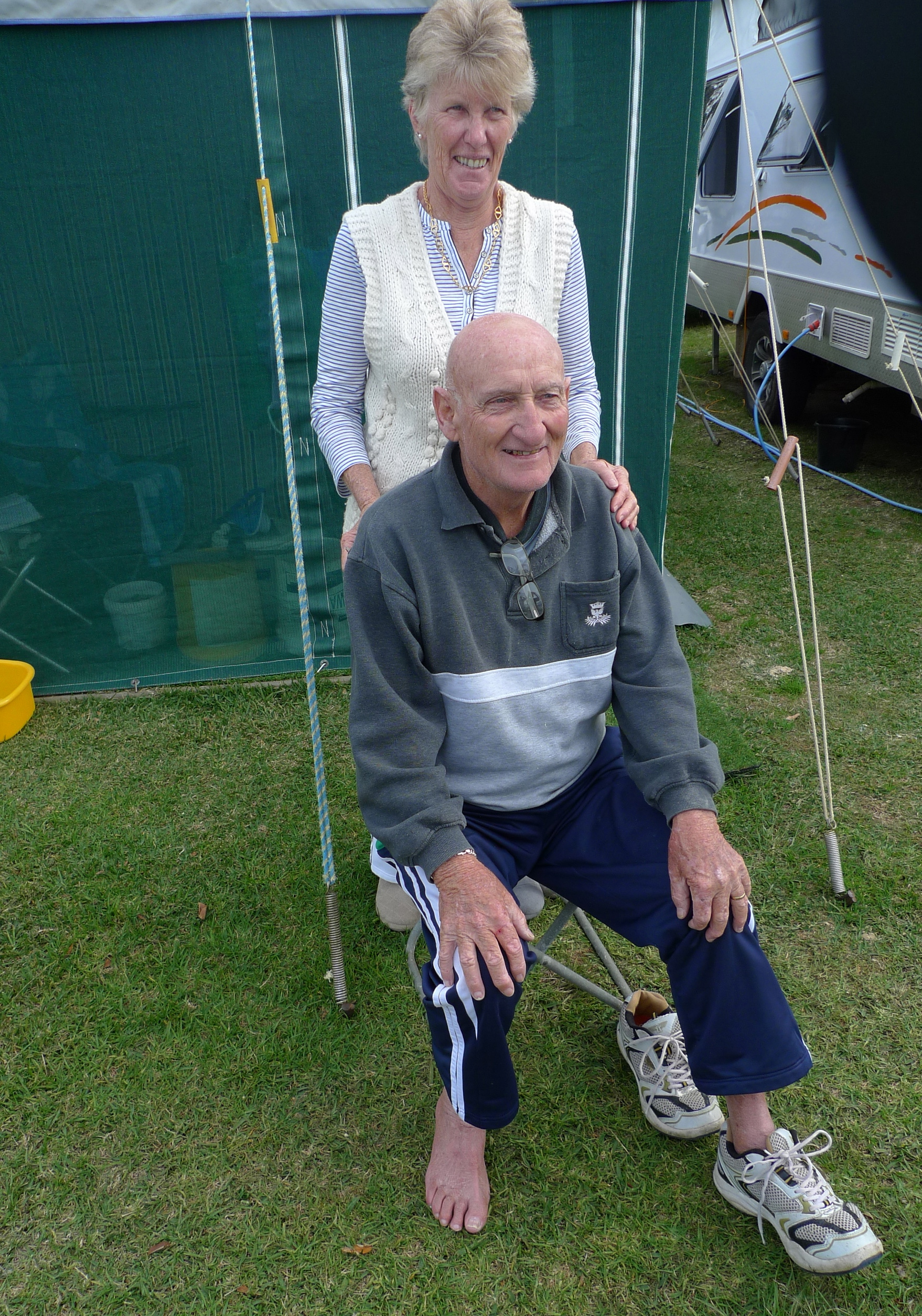 The photo above is one of Bruce and Yvonne. Bruce is having some health problems so I offered to help but Yvonne was quite efficient and I was not required. (Unfortunately Bruce passed away in 2016). We set up a conversation as one usually does when camping and the following story emerged, as told by Yvonne:

In 1998, Bruce and Yvonne went on their first fossicking trip. They admit they had no real idea what they were doing. Bruce told the story how they pulled up beside a remote camp in the Sapphire area and Bruce asked the owner what to do and where to look. The response he got was " I don't care what you do but don't do it here". This did not deter them and luckily other people were not as unhelpful as this person. In fact Russ and Elva Franks gave them a "mud map" of the Graveshill area near Sapphire. A mud map is a rough sketch of an area showing the major features and is usually not to scale. They followed the directions and on the first day found a beautiful sapphire and were hooked. Having gone for a two week trip they then stayed on for six weeks. They found several more gemstones, had them cut and gave them to their friends at home.

They continued to fossick at Graveshill for six years and then at "Big Bessie" for a further eight years. They had to hunt around for quite a while looking for areas to dig. Finding sapphires is not an easy occupation. It involves a lot of hard digging in gravel and lots of sieving with long periods of finding nothing. Bruce and Yvonne did not give up through these long unfruitful periods and were eventually rewarded. They did find some shallow ground (around 300 mm) and found many lovely sapphires. Because of Bruce's health problems much of the hard digging was left to Yvonne who obviously did not mind hard labour.

One day at Big Bessie, after a long spell of finding nothing, they decided to call it quits at the end of the day. As Yvonne washed the last bucket of "wash" they found a 42 carat tri-colour sapphire. (blue, green and yellow in the one stone). Wash is the finer gravel remaining after the larger pieces have been removed.

Another time they were digging at a location called "Millionaires Hill". They came across an old fireplace and Bruce didn't want to wash this material. Yvonne did and after some discussion, (nagging) he was persuaded to. To his surprise they came up with a 26 carat green and yellow sapphire. Yvonne proudly tells this story to everyone. Bruce just grins.

Bruce is a self taught man in many areas. Despite poor health, he has taught himself to be a plant operator and developed other skills that resulted in him becoming a civil engineering supervisor for a large International construction company, working in various parts of Australia and New Guinea. His command of Pidgin English is amazing and he had us in stitches relating stories about New Guinea. With this sort of attitude he was not happy with just finding gemstones but taught himself to cut and polish them as well and he taught himself very well. He also taught himself how to sharpen and temper his picks which is a very useful skill to have in such an isolated area such as Sapphire. 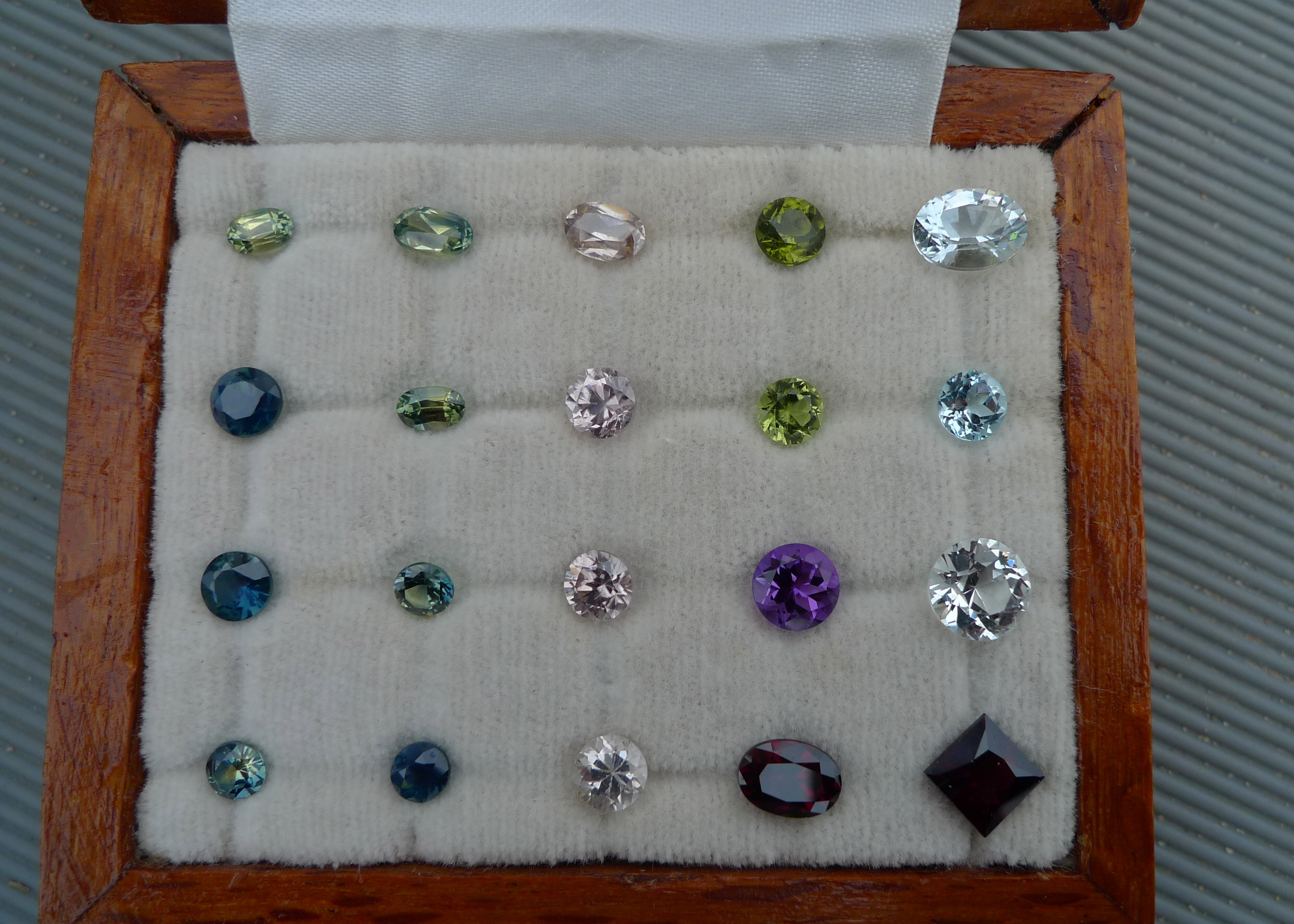 These are some of the sgemstones he has cut and you can see the high standard he has achieved.

Not only have they fossicked in the Sapphire area but they have also been to Fullerton River looking for garnets, O'Brien's Creek looking for topaz and Hart's Range looking for zircon. With their attitude and hard work they have been successful at all of these places and have found many and various gemstones which Bruce has cut, polished and in many cases set in professional settings of silver and gold. They are well known at the gemstone markets at Sapphire and at Lismore.

Bruce is quite an amazing character. He has an impish face and always has a story to tell. ( sometimes he tells the same ones over and over and says this is his Alzheimers taking over although this is one disease I don't think he has). At 78 and with a heart only working at 20 percent efficiency you would expect him to be sitting back just telling his stories. But no, at Wooli, on most days he would head to the beach and either go hunting for sand worms with Yvonne or go surf fishing. While he huffs and puffs a bit he is very successful in this. He is always willing to pass on his knowledge to anyone who is willing to learn. He iswatched over very closely by Yvonne to make sure he doesn't over do it.

I will now get back to my story of how I got to find sapphires at Wooli.

It just so happened that Bruce and Yvonne had a number of set and unset stones at very good prices and after doing some quick calculations I worked out I was getting them for free if I didn't travel any further up the coast. The cost of fuel from Wooli to Sapphire and back would have been quite expensive and then if I found any, which was unlikely in the short time I would have had, I would have to cut them or have them cut at about $30 per stone. Here I could purchase them already cut, with some of them set in beautiful settings for about the same cost. It was a no brainer to continue. We purchased quite a few stones and settings and settled in for some fishing lessons from Bruce instead of a hurried and fairly arduous trip to Sapphire with no guarantee of finding anything. The moral of this story is to talk to your neighbours in the caravan park because you never know what they may reveal that can save you a lot of labour. 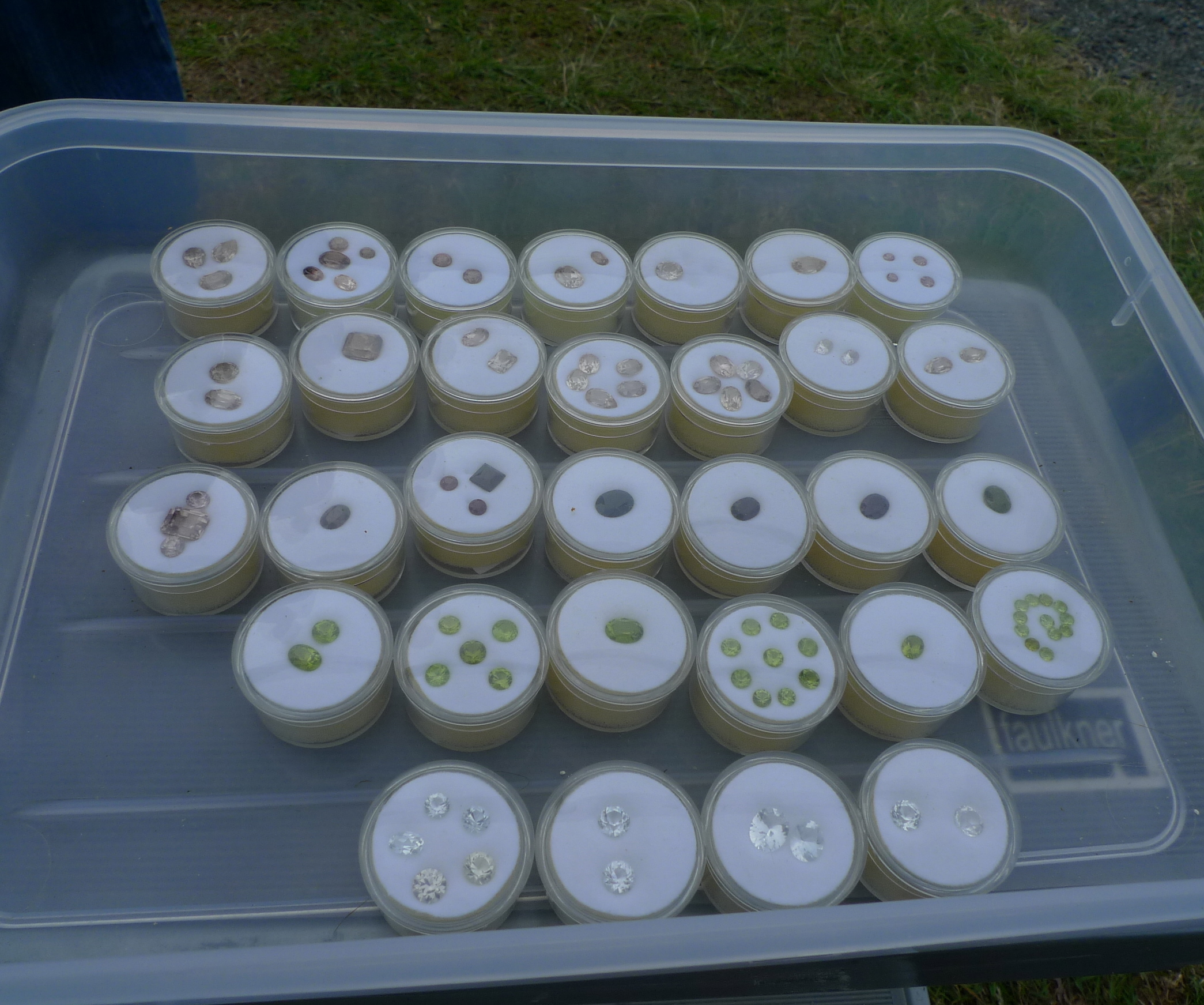 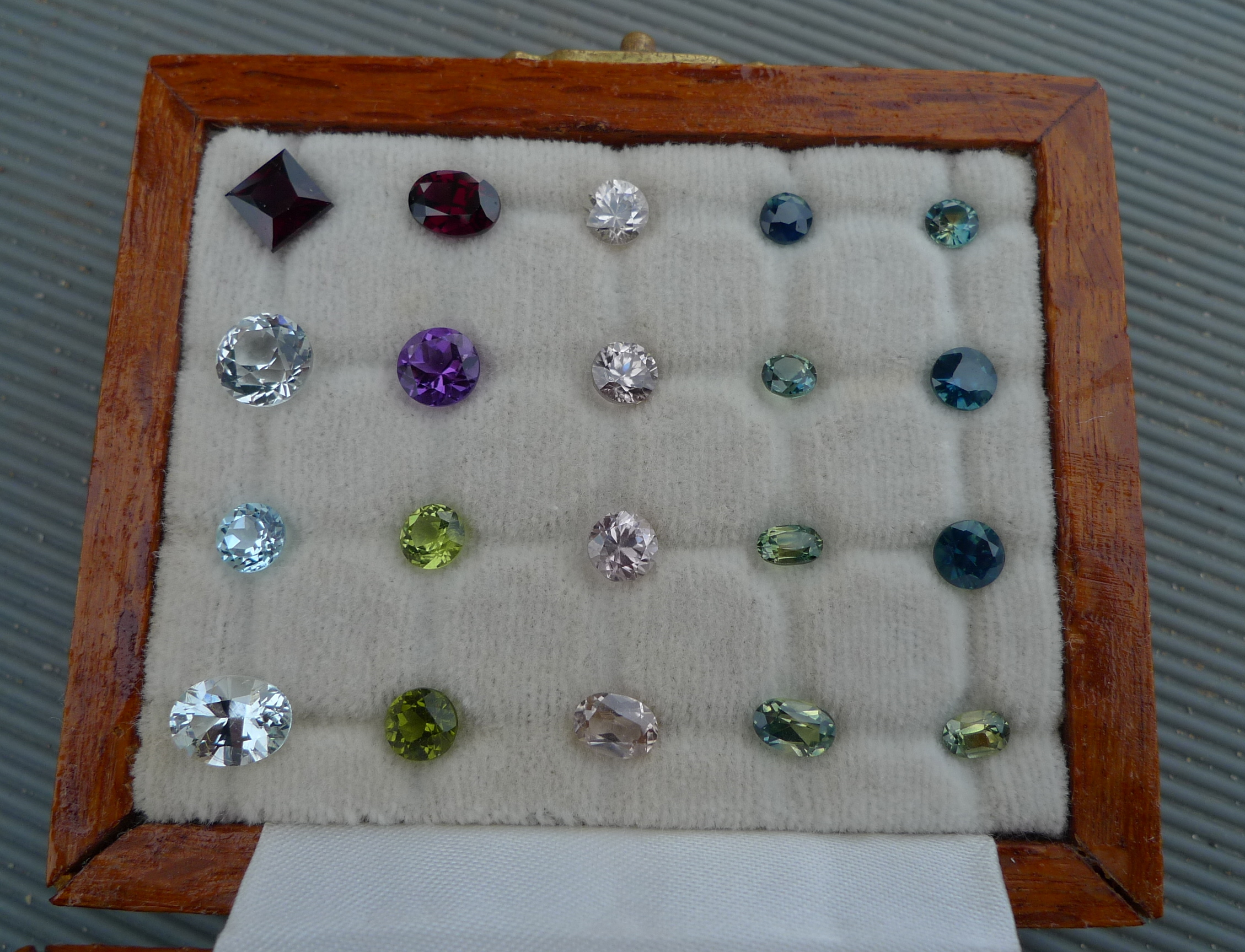 Bruce still has a lot of gemstones to sell; some in settings and some just as cut stones. They are well cut and are genuine sapphires, topaz, zircon, garnet and peridot and not manufactured stones. He is selling them at very reasonable prices. If anyone is interested I can direct you to Bruce so you can deal directly with him. Please email me if you are interested. Bruce does not have a computer so can't be contacted directly by email.