Architecture in the Opal Fields

The opal field towns were established at a time when building materials were very scarce and hence the early architects had to very inventive and had to recycle almost everything they could find. The first miners arrived on foot or by horse, or in the case of Andamooka, by primitive motor vehicle, and hence could not bring anything other than the very basics with them. The shelters they created were made with mud, boughs of local trees and if they were lucky, some bits of canvas and tin. While these were primitive they did provide some sort of shelter from some of the extremes of weather faced in the opal fields. While most were very basic there are some fine examples of Architecture in the opal fields.

At Andamooka, as the town developed, a small settlement was created to form the centre of the town. These houses have been lovingly restored by the locals and are well worth a visit. 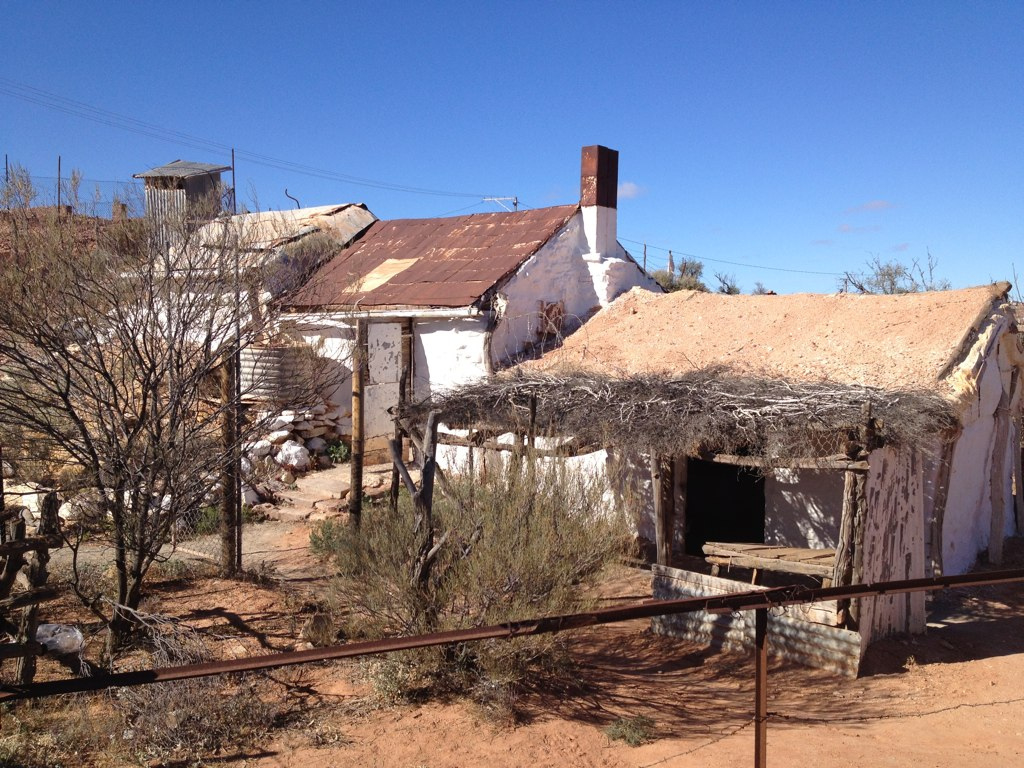 The early miners used whatever local and imported materials they could find and actually built well designed dwellings, as long as you were not above average height. Either that or the early miners were not very tall. You do have to duck your head to enter these houses. Note the flattened tin can roof and the use of tin cans for the chimney extension. The house in front has a covering of opal dirt to improve insulation. The following photograph is a view inside one of the houses. 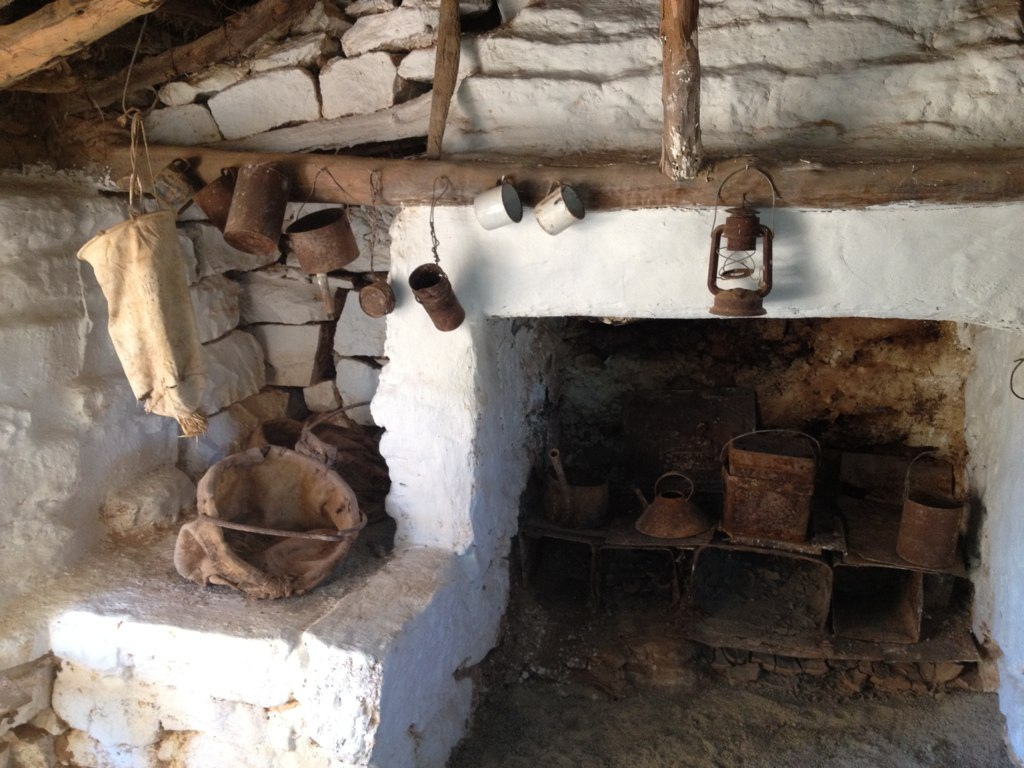 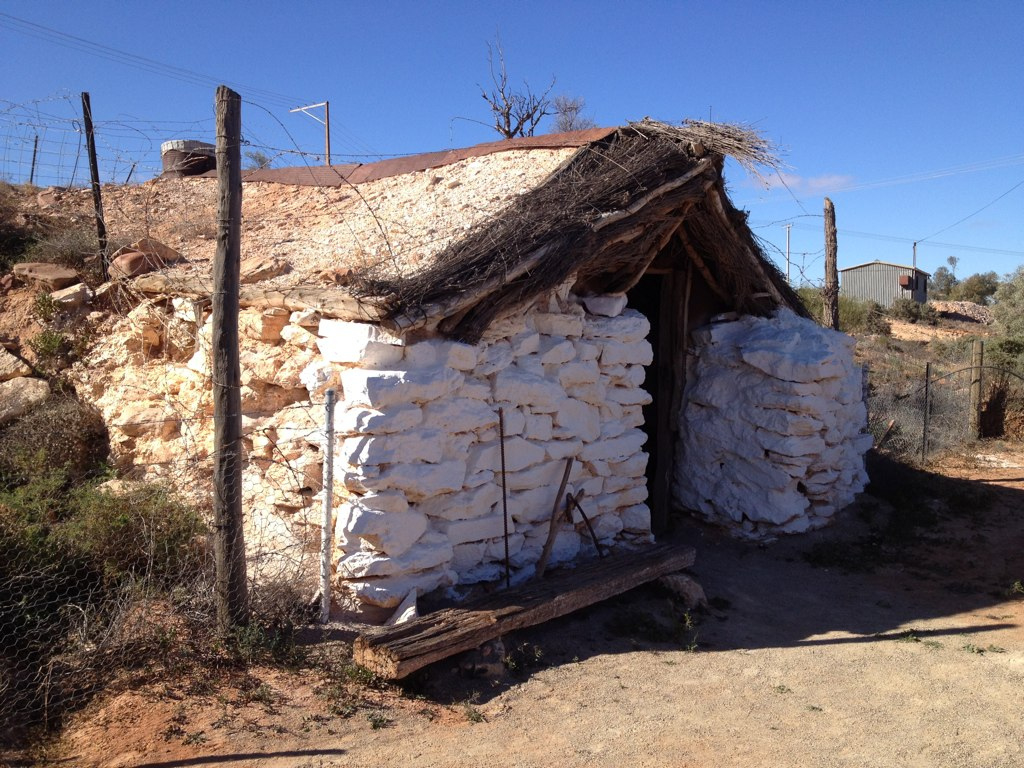 This is another fine example of an early miners house at Andamooka.

As time moved on more materials were brought in. Food came in packing cases and tin cans. These were not wasted and often used to create a shelter. 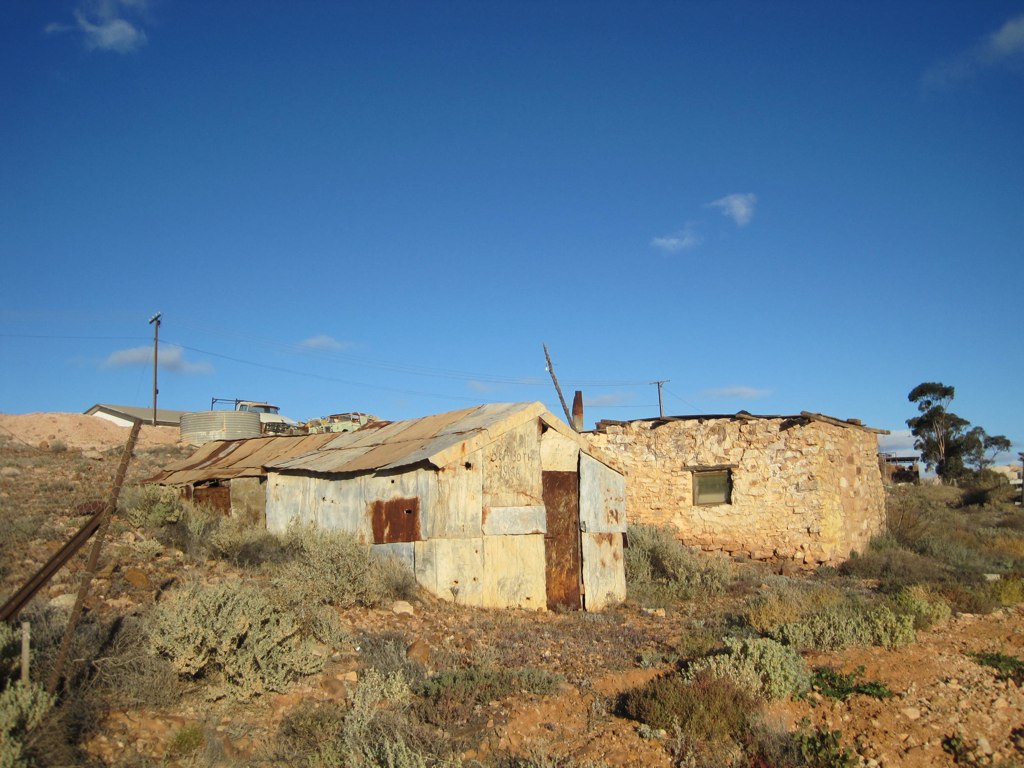 The house in the foreground appears to be made of such materials. While very makeshift it is still quite durable as it is still standing in 2013. 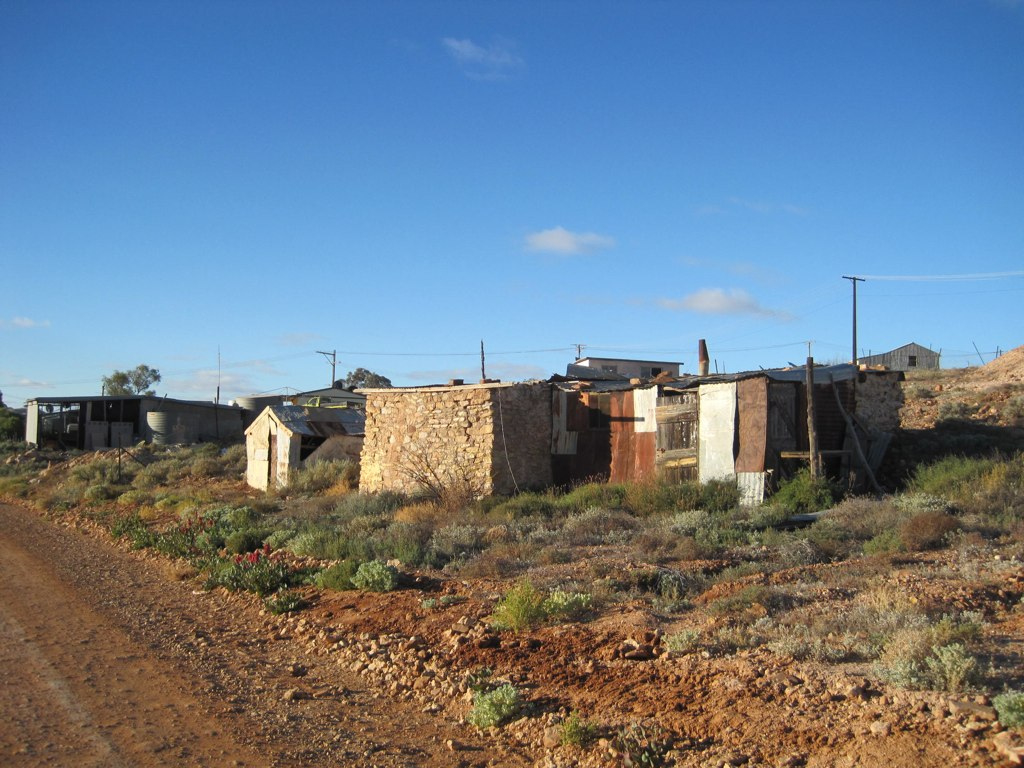 Other miners collected local stone and concreted the small pieces together to construct a dwelling using tree branches for roof supports and tin for the roof. The house in the foreground above is an example. Minimalist design was the order of the day but this was ok as the reason the miners were there was to look for opal and not to worry about fine architectural detail. There is also another example of the re-use of old tin cans in the construction of housing in the early days.

As the fields developed further, that amazing invention, corrugated iron was introduced as the wonder material for building in the desert. It had the ideal properties for housing. With virtually no insulating properties it ensured houses were scalding hot in summer and freezing in winter. In addition it rusted easily leaving gaping holes which let in the rain. Unfortunately there was not much else at the time. It did have the benefit that it was readily available, easily transported and you did not have to be an experienced builder to use it. It was also very durable. While it rusted badly it could easily be patched. It also held together quite well and if a sheet did blow off in the wind you could easily nail it back on again. You didn't have to paint it. The rust created beautiful patterns and it blended in with landscape. Town Planners could never say it was aesthetically inappropriate as the colours matched the surrounds quite well.

The following photograph shows all the attributes of this fine building material. 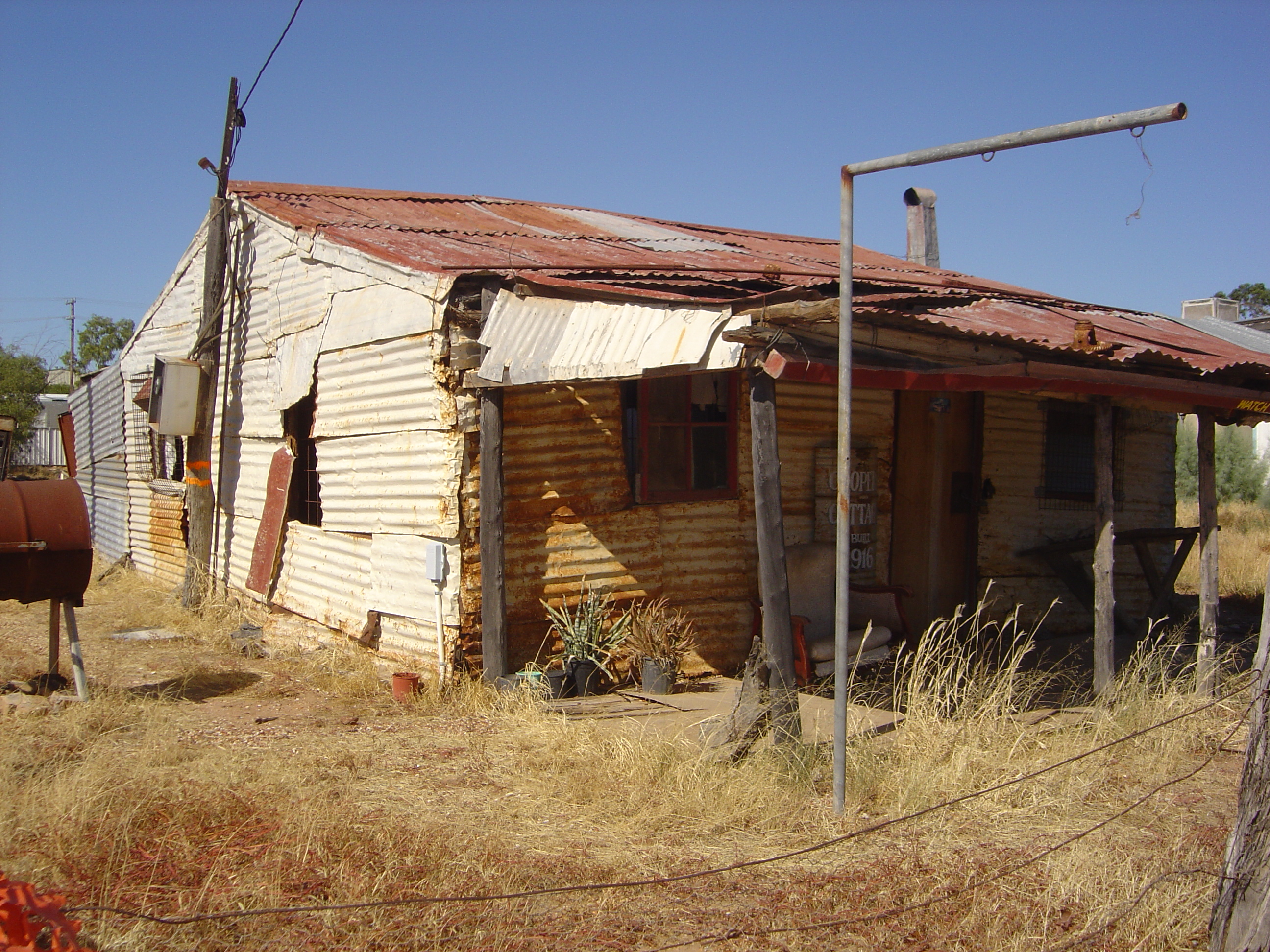 This fine structure is still standing today. The sign at the front says it was built in 1916 and has survived the ravages of time quite well. Security was obviously a problem at some time and hence the use of steel mesh to prevent illegal access. The extension at the rear is obviously recent and shows how these early designs can cater for extensions with relative ease and little cost. It has seen better days but would still provide shelter today if required.

The early miners discovered that the temperature underground was fairly consistent and not subject to the variations above ground. Some, especially at Coober Pedy and White Cliffs have been constucted totally underground and many of these exist today. Hotels and motels as well as ordinary houses have been constructed and some are quite luxurious.

At Andamooka the terrain did not lend itself to the construction of underground housing. Some miners adopted a compromise. They dug a trench and then constructed their house partially underground and partially above ground. While not as cool as the underground houses at Coober Pedy and White Cliffs, this type of construction was certainly better temperature wise than the above ground, corrugated iron types. The miners used local timber for the roof supports and then corrugated iron for the roof. Some covered the roof with earth to further insulate the house.

The following photograph is a good example of such a house. 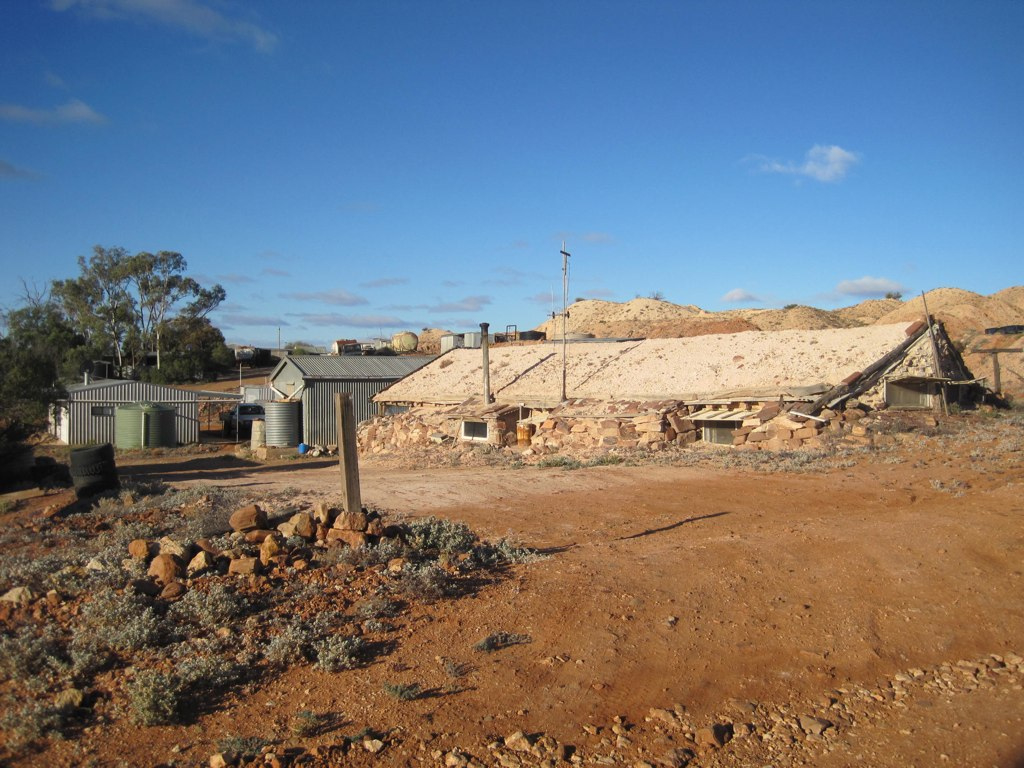 Note the small windows. Obviously light would have been a bit of a problem but at least it would be relatively cool inside even on the hottest days. Local stone was also sometimes used for the inside walls as well as for those sections of wall that was needed outside. Inside they were relatively comfortable, often with whitewashed walls and exposed beams. They were appriately furnished and served their owners well. 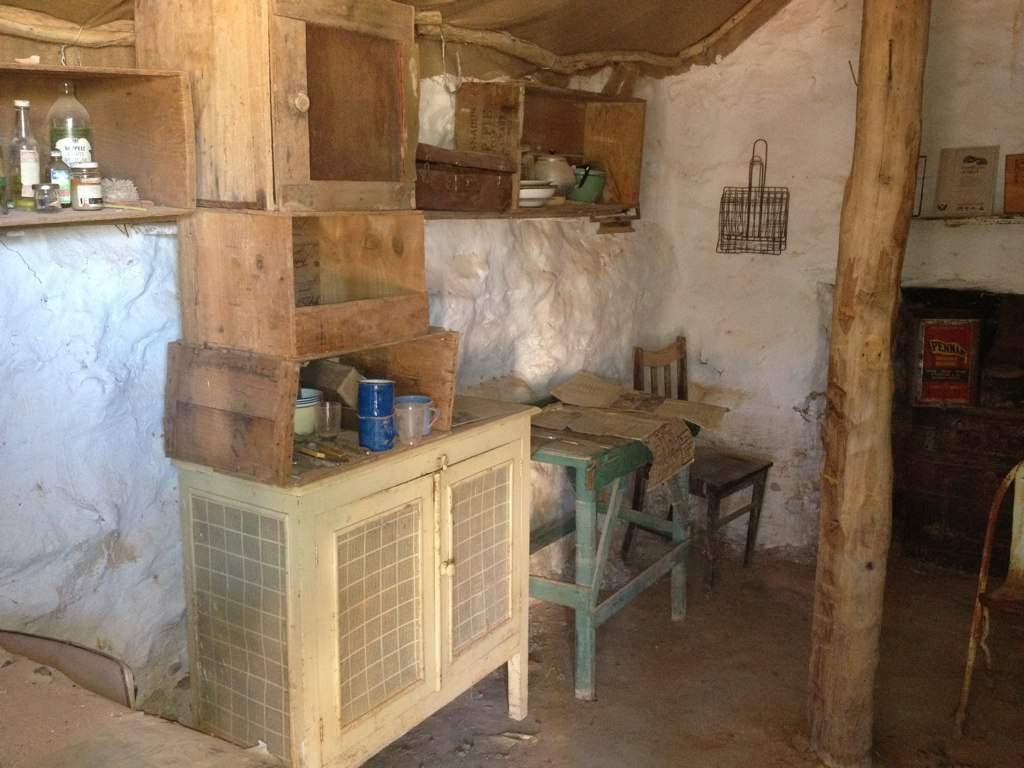 The above photograph is of such a half dugout still in use today. While fairly basic it is utilitarian. The use of texture abounds with the rough surfaces of the whitewashed natural stone providing contrast with the sensual feel of the roof supports. Environmentalists will be pleased to see the re-use of old packing cases which provide adequate storage for the basic needs of the miner. While this is said a little tongue in cheek, these houses are quite cozy. With a wood fire burning at night the occupants are quite warm and even in summer the stone lined walls beneath the ground ensure a comfortable temperature.

Some people in later years took a really minimalist approach and dropped in an old caravan. See below. 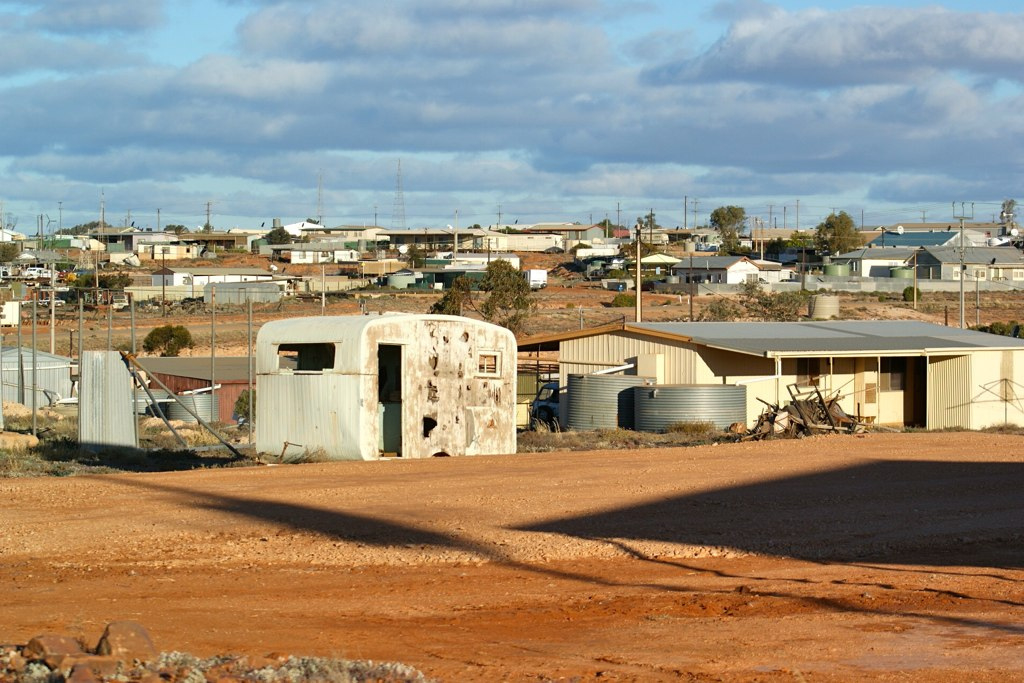 Obviously people are not living in this today but it would have served its purpose.

I couldn't finish this blog without showing you a great example of the art of fencing When the miners first arrived there was not a real need for fences, but as time went on, some people wanted to delineate their little patch of land. fencing materials and tools were in short supply but not ingenuity. 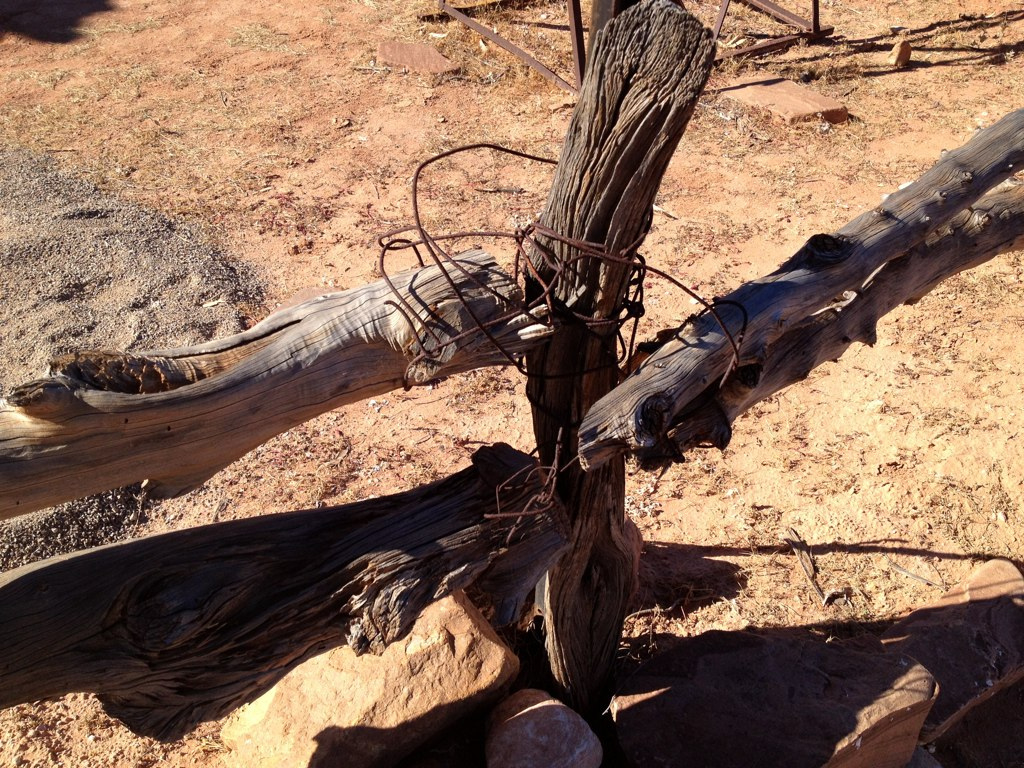 I doubt that the builder of this fence had a lot of training but the fence still stands today.

If you do travel through the opal towns do look carefully at the detail on the old houses. They were built without the restrictions placed on us by the building authorities and show how people can utilize limited resources and with some imagination, create a dwelling that will stand for a long time.

If you click on the photographs they will enlarge for a better view.

Opal Fields - There are some strange creations out there.

Minnie Berrington - Update from a relative