If ever you travel through any of the opal towns it pays to stay awhile and talk to the locals. For some reason these places attract some of the real characters from all around the world. If you are looking to buy a small parcel of opal it gives you a reason to talk to the miners and they are often willing to tell you a little about themselves although not all of them will open up. We have been lucky to meet some of these characters on our numerous trips. One of the most interesting was Crocodile Harry.

We were driving around Coober Pedy taking the sights when we came to Harry's dugout near the Four Mile Opal Field. It was marked by a sign saying "Crocodiles Nest" and this immediately aroused our interest. Harry's dugout is an underground cave carved out of the hillside but is not quite like any one elses dugout. As we approached we saw someone looking under the bonnet of an old car. It was Harry. We struck up a conversation with him and he said he was having battery trouble so we offered to jump start the car. Before doing this though he allowed us to visit his dugout , which was open to the public for small fee. The visit was well worth it. We eventually did start his car which didn't look like it ws capable of making the short trip to Coober Pedy. 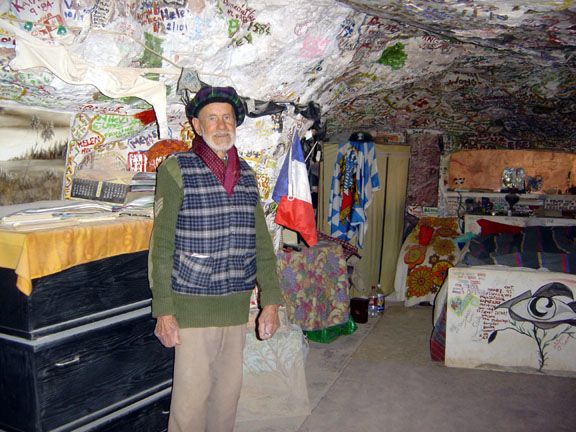 This is a photograph of Harry in his dugout. The entire dugout is festooned with ladies underwear and signatures he had obtained from over 1,000 virgins who had visited and stayed in the dugout. There were also many sculptures made out all sorts of junk. I would like to know what his idea of a virgin was. 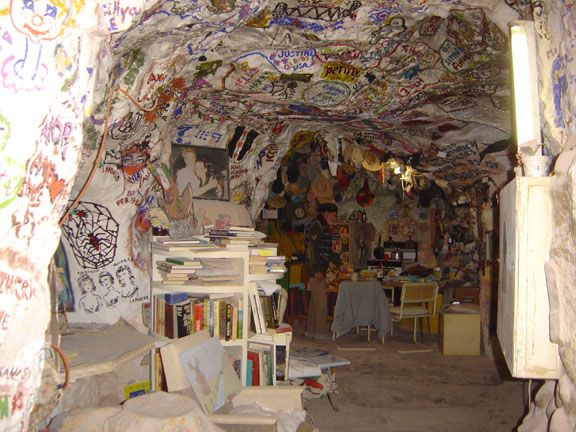 This is another photograph showing the amazing clutter. 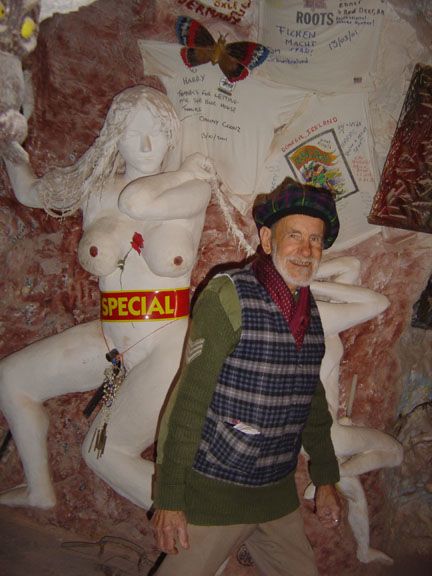 And this is another of Harry showing his impeccable taste in sculpture.

Harry's real name, according to him, was Arvid Von Blumental and he said he was a Baron from a famous Latvian family but had to flee Latvia after World War 11. He prospected for uranium up north when he first arrived but couldn't find any and was so ashamed he took up crocodile hunting in Northern Australia and New Guinea, as one does. He claims he didn't know much about it when he started but soon learnt. There are many photographs of him with crocodiles in his dugout so I don't doubt his claims are true. Some of the photographs make Crocodile Dundee look tame in comparison. In all he spent 13 years hunting crocodiles.

In 1975 he came to Coober Pedy and sadly died on 13th October 2006 and is buried in the Coober Pedy Boot Hill Cemetary. While in Coober Pedy he quickly achieved legendary status with his exploits.He was seen goose stepping down the main street of Coober Pedy in a World War 11 German uniform and also relieving himself onto the flames of a burning hotel as ot burned to the ground.He was also famous for chasing girls and it would appear he was quite successful by the huge collection of underwear that adorns his dugout. He was also a collector of all sorts of hats and of course a sculptor. I doubt his sculptures will ever be shown in any major art gallery but they are certainly of interest around his dugout.

In an article in the Australian Woman's Weekly of 21 October 1981 there is a story about Harry. Apparently a German magazine wrote an article on Harry featuring some photographs of him. As a result he became quite famous and received a lot of fan mail. He chose to reply to Marta, who was at that time married to a German Professor. In July 1977, after her divorce, Marta arrived in Coober Pedy and they were subsequently married. Harry enlarged the dugout to accomodate Marta and her possessions.

At around this time Harry also took up scupting in Zebra Stone obtained from a hill in Coober pedy. Marta also did this and some of her sculptures are set out in the dugout for tourists to see. Mementoes of their life are embedded in the Memory Wall in the dugout including Harry's old pick, lamp and boots and one of Marta's sandals. On another wall is a full scale replica of a crocodile.

His dugout was featured in the Mad Max film "Beyond Thunderdome' so look out for it when you next see it. The crew made a singing sculpture called "The Orchestra" before they left and it apparently sings in the breeze. I believe the dugout is still open to the public for a small fee as it is now a famous landmark.

There is more information in a story in the nla government site.

That is all I have been able to find out about Harry at this stage. If anyone has any more information I would be glad to add it to the post.

Just talking to Harry you would not think he was the eccentric that he portrayed. He seemed to me a perfectly normal person in starnge surrounds but maybe that says something about me.