This is a brief story about Brian Tansell, a regular resident of Andamooka since 1968. This story was told to me by Brian himself on 30th June 2011. Below is a photograph of Brian taken in 2012.

Brian is well known in Andamooka and Port Lincoln where he spends the summer months. You may have met Brian and his wife Ronnie at many of the markets around the Port Lincoln area where he sells opal, especially treated Rainbow Matrix Opal, which he has mined and treated himslf. These are sold at very reasonable prices and are beautiful examples of this wondrous stone that is only found at Andamooka. 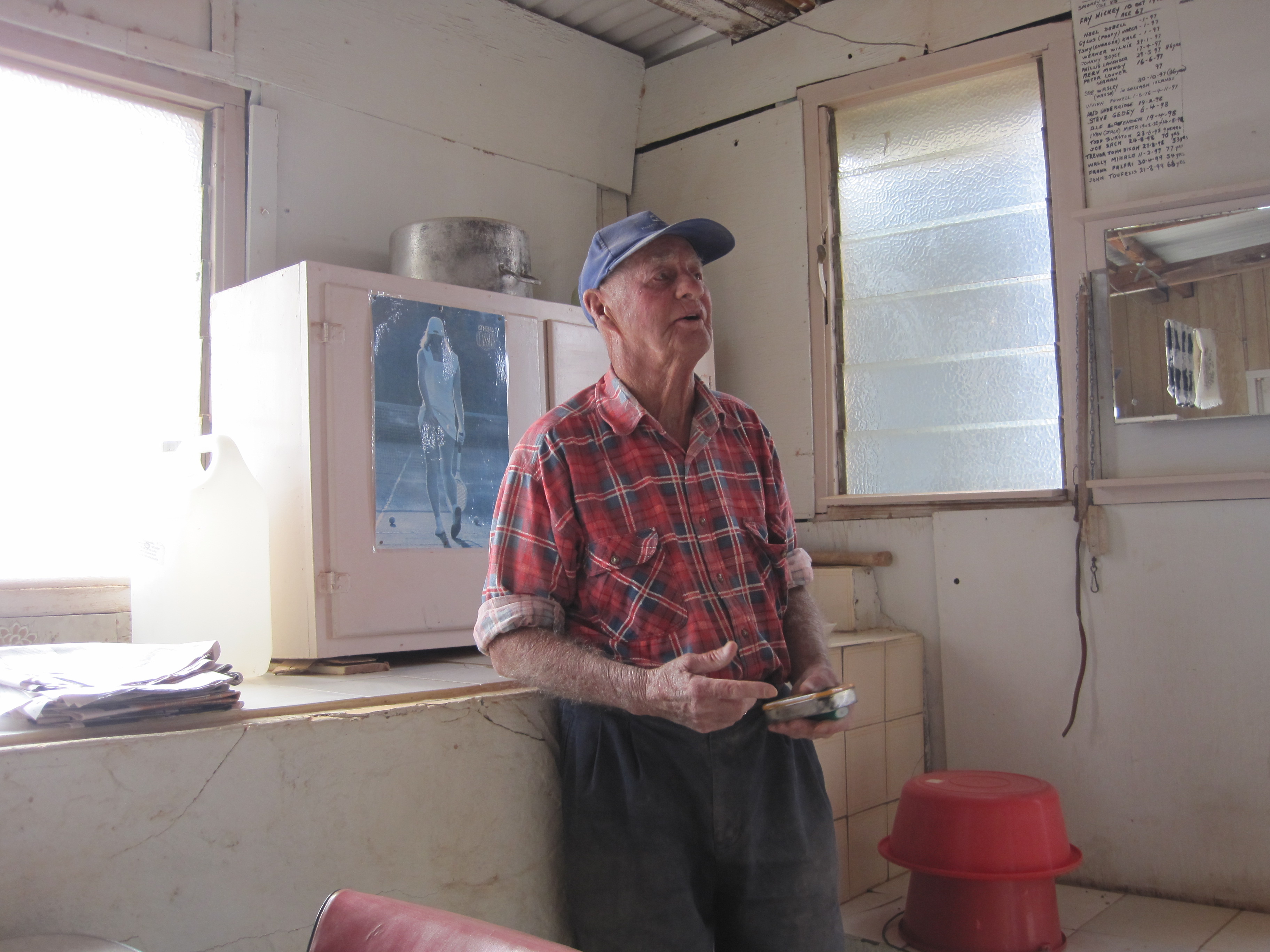 This is a photograph of Brian taken in his dugout in 2012.

Brian was born in 1928 and when he was 10 years old he was asked by his cousin's wife to go to Whyalla to keep her company as her husband was, at that time, working in Broken Hill for BHP.Brian's mother was pregnant at the time and readily agreed. While Brian was in Whyalla he went to school there for 6 months.

Around that time, opal miners from Andamooka used to come down to Whyalla during the summer months to get away from the excessive heat. Temperatures close to 50 degrees were common in summer and life would have been very difficult during the summer months for any of the miners who stayed on.One night two opal miners came to visit Brian's cousin who had returned from Broken Hill. One of the miners was Jim Shaw known as the" Iron Man". Jim was quite famous for pushing a fully loaded wheelbarrow from Tarcoola to Coober Pedy (about 150 miles and there were no roads) in the summer of 1920. You can read about him in P.Van Wake's book titled "Opal Men" which is a good read if you are interested in the characters who lived in the various opal fields.

On this night Jim opened up an old wooden gelignite box which was half full of of rough opal which he had mined at Andamooka. There was also a small box of cut opal which Jim had had cut in Andamooka. Jim asked Brian's cousin and his wife to to pick a stone to keep. This they did and later had them set in jewellery.

Jim then said to Brian "would you like one son?" Of course Brian did and from the tender age of 10 he became fascinated with opal and especially with Andamooka where Jim and the opals had come from.

We now skip to 1968. Brian had led a varied and interesting life, was married and had two sons. He had never lost his interest in opals or Andamooka but had not had the time to follow these interests until now.So in this year, Brian loaded up the Holden Station Wagon and set off for Andamooka with the children. In 2011 the trip from Port Lincoln takes about 5 hours on good quality sealed Roads. It was far different back in 1968 and the trip would have been quite an adventure in itself as the roads into Andamooka, as well as the Sturt Highway, were very rough and sandy making travel a very tiring business.

They carried the very minimum of supplies with their shelter being a few pieces of canvas with which they would erect a very rude shelter on the opal fields where they were going to dig.They initially mined on the Shallow "Stevens Field", finding some matrix and a small amount of blue opal. They didn't make a fortune on that trip but just enough to keep alive the hope that all opal miners have, of finding that elusive treasure.

While they were there Brian's 5 year old son asked if they could look up Jim Shaw, the "Iron Man". Brian asked around and found that Jim was currently working at the White Dam opal field, about 11 km from Andamooka township. Brian took his two children out to the site with two bottles of beer for a gift to Jim. His sons duly presented Jim with the beer and took photos of the event. Obviously one of the sons was not that impressed with Jim as he said to his father "He's not made of iron: he's made of the same stuff as us".

Jim may have been made of the same stuff as us but he was very strong. He was reputed to have lifted half a ton of pig iron at Whyalla for a bet. In P Van Wake's book, he also refers to Jim as the "Human Buckjumper". He used to take bets that he could buck any man off his back as long as he weighed under 10 Stone (around 65 kilograms) It is not known if anyone ever collected a bet by staying on his back. Jim lived at Andamooka until he was 87 and is buried in the Andamooka Cemetery. 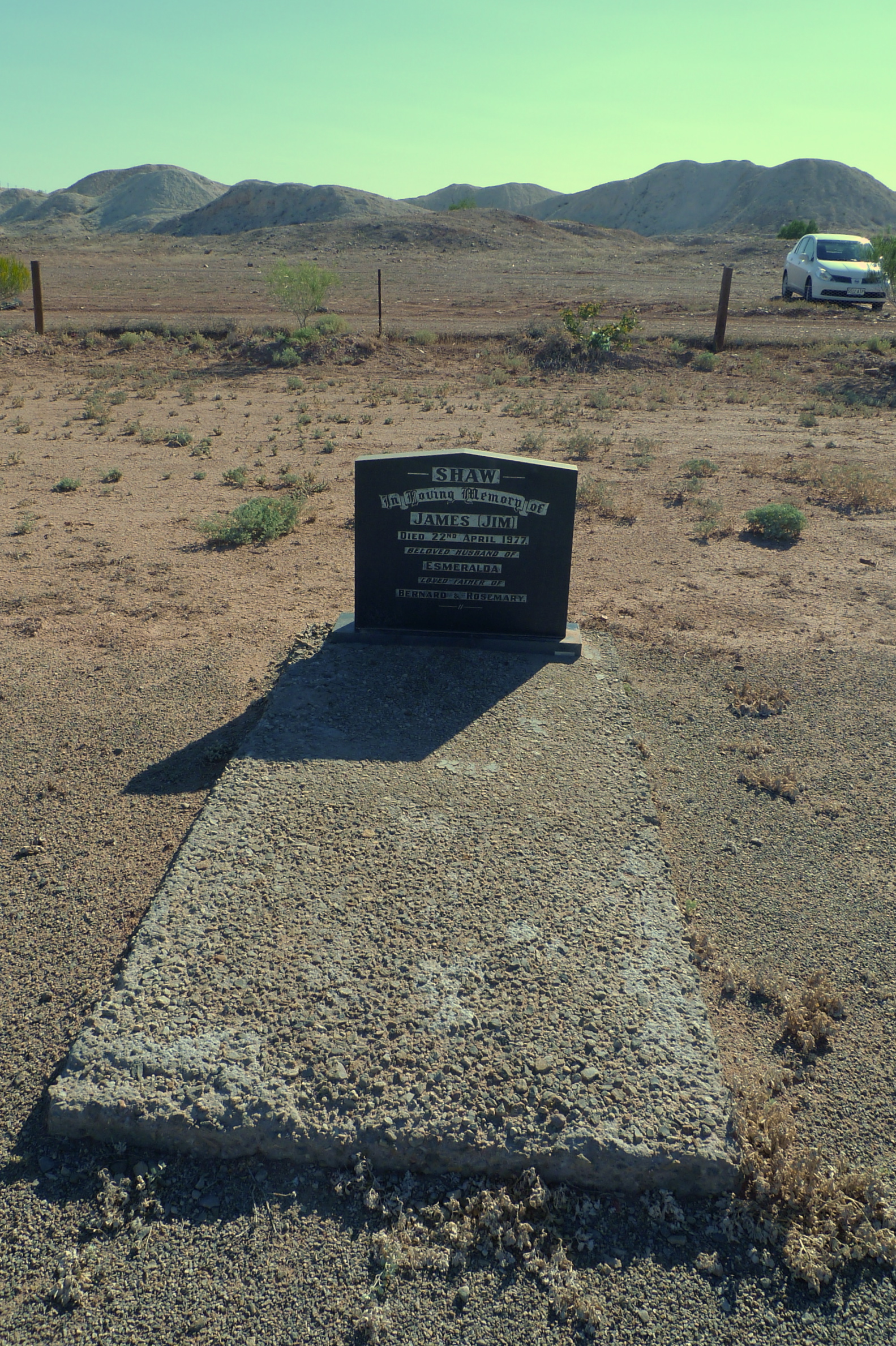 The above is a photo of Jim Shaw's grave at Andamooka.

Back to Brian. Brian kept returning to Andamooka and in the late 1960's engaged "The Yanks"to cut a shallow bulldozer cut in the shallow ground (approximately 1 metre deep).He found small amounts of opal but enough to keep him oing. This became his preferred method of searching for opal. The dozer, or excavator removes all of the overburden down to the opal layer, which the miners can recognize, and then Brian would pick over the area carefully looking for traces of opal. This may sound easier than mining underground but he was searching for opal in the full sun which can be very hot and tiring even in the winter.

Brian was still working down south but kept returning to Andamooka each to search for opal. He couldn't keep living under canvas so bought a small shack from another miner so he could have a little more comfort in the winter months while he was mining.

In later years he bought two other blocks with the remains of two "dugouts". These were original miners huts built in 1946 and were constructed by digging wide trenches into the dirt up to window height and then forming a wall and roof of natural timber. They were then covered in soil to form a sort of cave. This produced a much cooler shelter than conventional above ground houses.Brian has restored these in recent years , lives in one when he is in Andamooka and lets guests stay in the other at various times. He has a notice board on the wall of one of the dugouts with the names of all the guests who have visited which is, in itself a little bit of history.

Around 1982/83, Brian and Ronnie set off for a 5 month stint at Andamooka. The filed a claim at the shallow part of "German Gully", one of the local Andamooka fields where some fabulous opal has been found.. This area had been well worked out by then but Brian arranged for a series of bulldozer cuts which revealed several pockets of unworked ground missed by the underground miners.They found several small stones, some matrix and other traces of opal. It was enough to pay expenses and keep up their interest in returning each year.

And so , each year they returned and continued to work the same area up until the 1990's finding just enough to pay the bills. This seems to be the same for many miners, but there is always the chance that a big find may be just around the corner.

Brians best find was a 5 ounce piece of red crystal opal found at Yarloo South. He cut many stones from this and it kept him going for some years.Brian has found a lot of Andamooka Rainbow Matrix opal (was called concrete) which in its natural state looks like concrete, but when sliced and treated with sugar and heat and then coated with liquid glass produces a beautiful gemstone). Brian treats this, sets some into jewellery and sells them at markets around the Port Lincoln area. If you meet him get him to tell you some of the stories of the characters he has met during his many years of mining at this fascinating place called Andamooka.

In 2013, Brian staked a claim at German Gully and had a dozer level the site to just below the opal level. In following the machine he picked up a lovel 2 kg piece of matrix which he has since sold. Below are photographs of Brian with his matrix find. 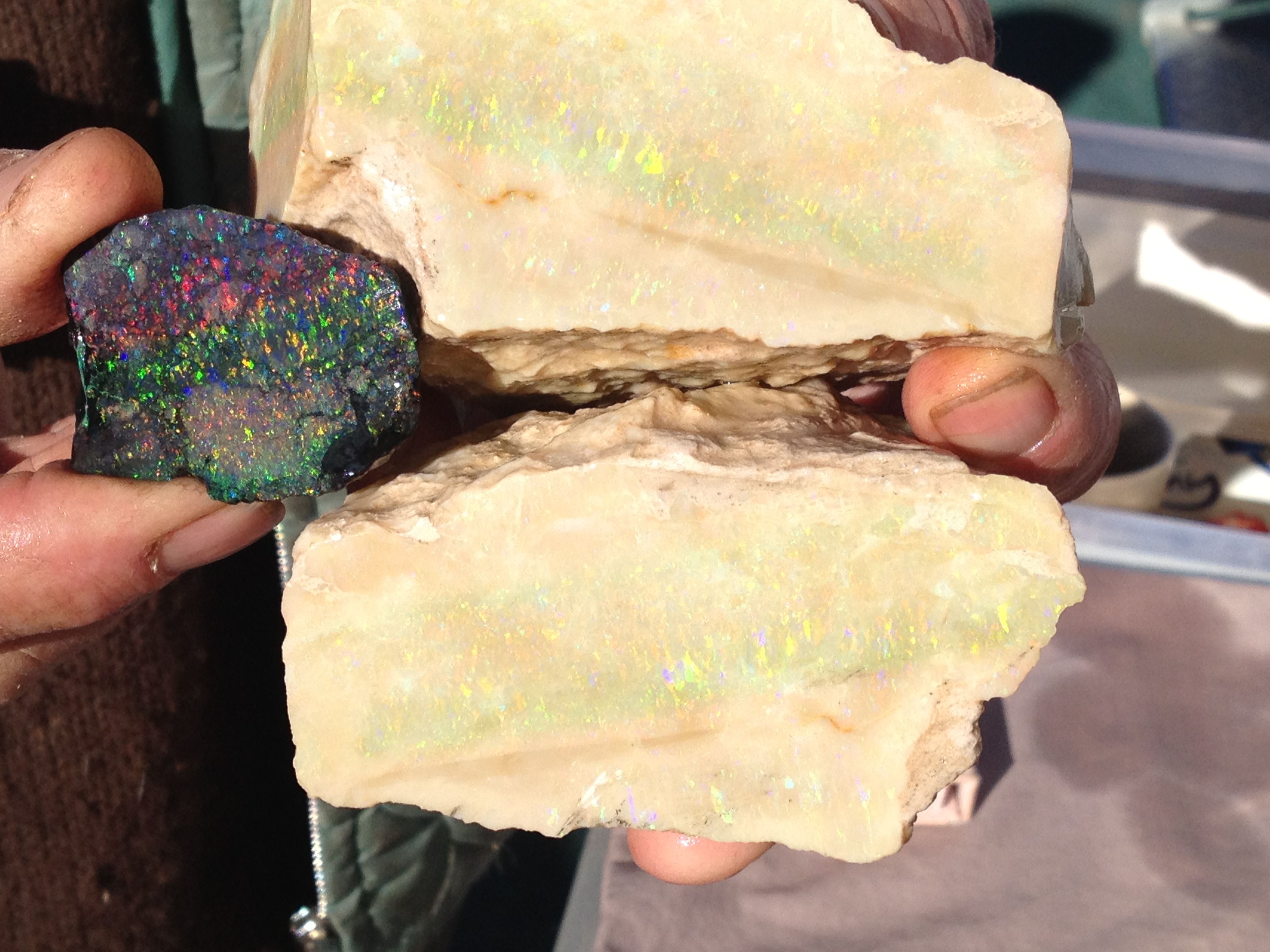 Brian was very proud of this find and showed it anyone who was interested and soon sold it.

Brian unfortunately had a stroke in late 2012 and in March 2013 was diagnosed with cancer. Brian passed away on April 6 , 2013. Our thoughts are with his family at the time writing this.

Unfortunately Andamooka is changing. It is now almost a suburb of Roxby Downs. Some of the streets are now sealed and quite expensive houses are replacing the quaint, but often rundown shacks that existed when Brian first went there. Brian's dugouts are still there though and definately worth a look. Even if Brian isn't there, any more, ask around and I am sure you will find many of the residents who will remember him and his stories.

I hope this brief story interests you. If it does make sure you visit Andamooka. It is an easy drive from Port Augusta ,on sealed roads with some amazing scenery and points of interest on the way. There is the township of Woomera with its display of earyl rockets and the delightful mining town of Roxby Downs with its adjacent Olympic Dam copper and uranium mine which is destined to be one of the biggest mines in Australia. And then there is Andamooka. A relatively new opal town but still full of interest and still the chance of anyone picking up a lovely piece of opal. I guess this is what keeps Brian returning each year even though he turns 84 this year.