White Cliffs is a small town located 95 km north of Wilcania in New South Wales. Opal was 1st discovered there on 1889 and by 1897 there were thousands of miners in the area. The opal was found in white sandstone country indicating it had once been part of a vast inland sea. Beneath this sandstone , at various depths depending on the terrain, lies a gritty layer of "opal dirt". Below that there is greasy clay which usually does not produce opal. The lst layer of sandstone above the opal layer is often harder and more silicious and the miners called it "the band"

White Cliffs opal is all seam opal, found in flat layers of various thicknesses. Talking to a miner once I was told how prospectors had drilled regularly spaced holes at a particular location and found no opal so left the claim. He sunk a shaft in between their holes and struck opal. On excavating the site he found an almost continuous sheet of opal between all of the four original holes. How unfortunate were the original drillers? He claims he made a fortune from that location and that set him up for life.

There are still a few miners working at White Cliffs but there are also people living there who just love the place and are not all that interested in opal. The town is now quite small but still boasts a pub, general store and petrol station, a caravan park, some opal shops, the old solar station, a golf course and of course lots of opal holes. There is a whole section where open cut mines are not allowed and this means you can still see some of the original shafts the miners dug. In many other opal areas, particularly Andamooka, open cut mining has been encouraged and has completely changed the landscape and in my opinion has ruined the area. At White Cliffs you can wander around the mines and occasionally pick up a piece of opal or potch although this is getting rarer and rarer.

In amongst the holes there are some lovely plants and this is a real boon for the photographer. Below is a selection of photographs taken by Barbara. 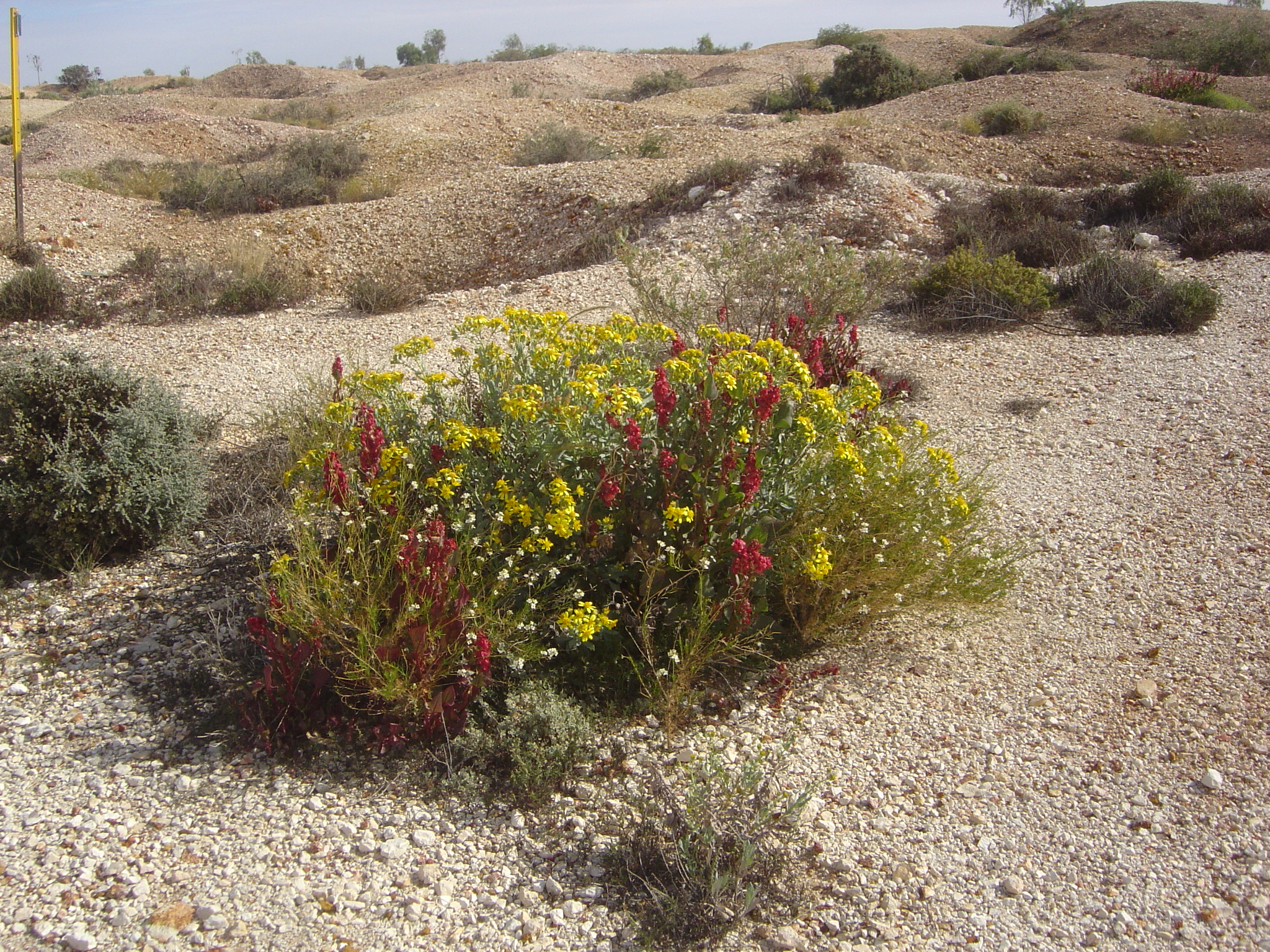 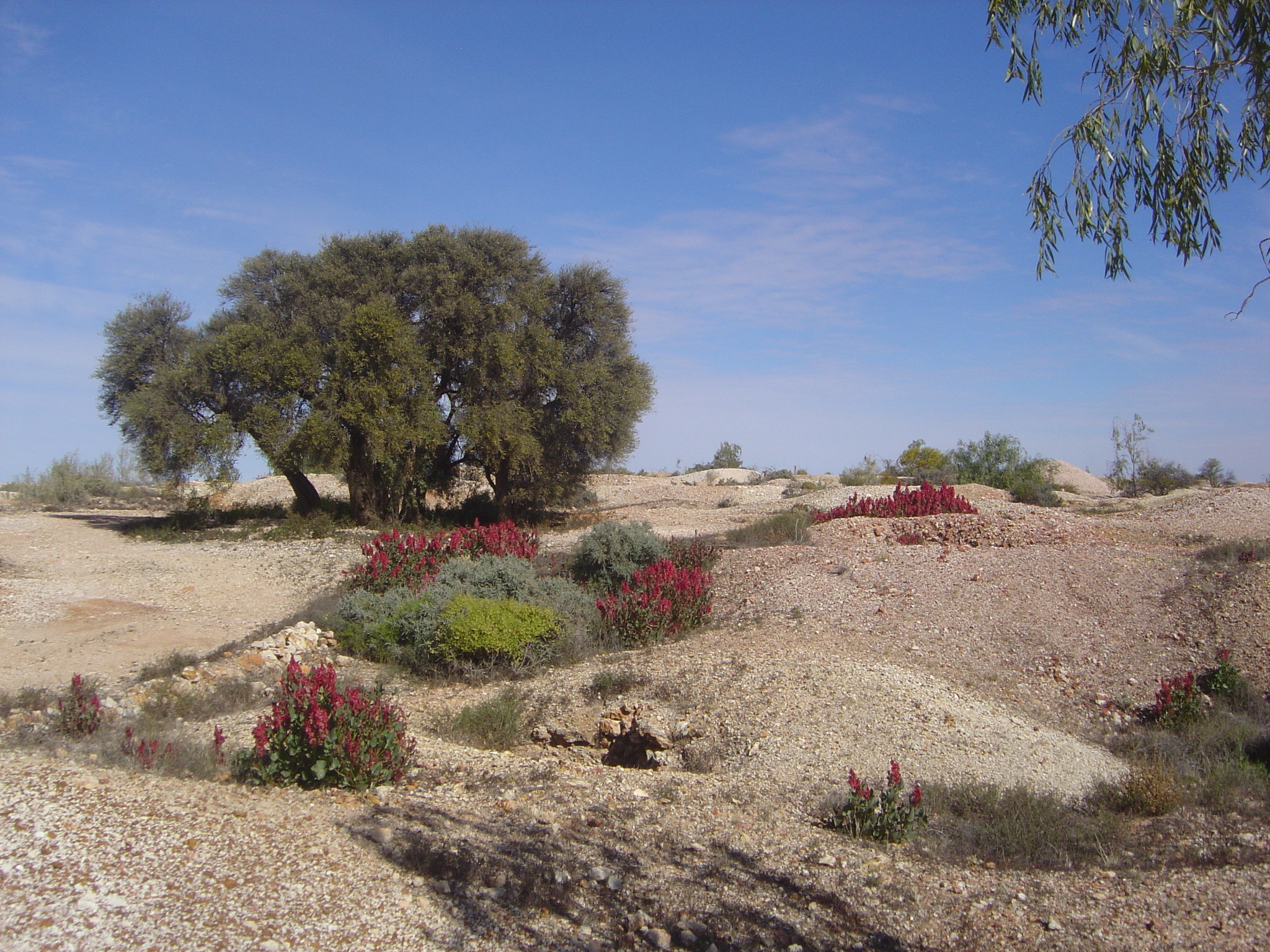 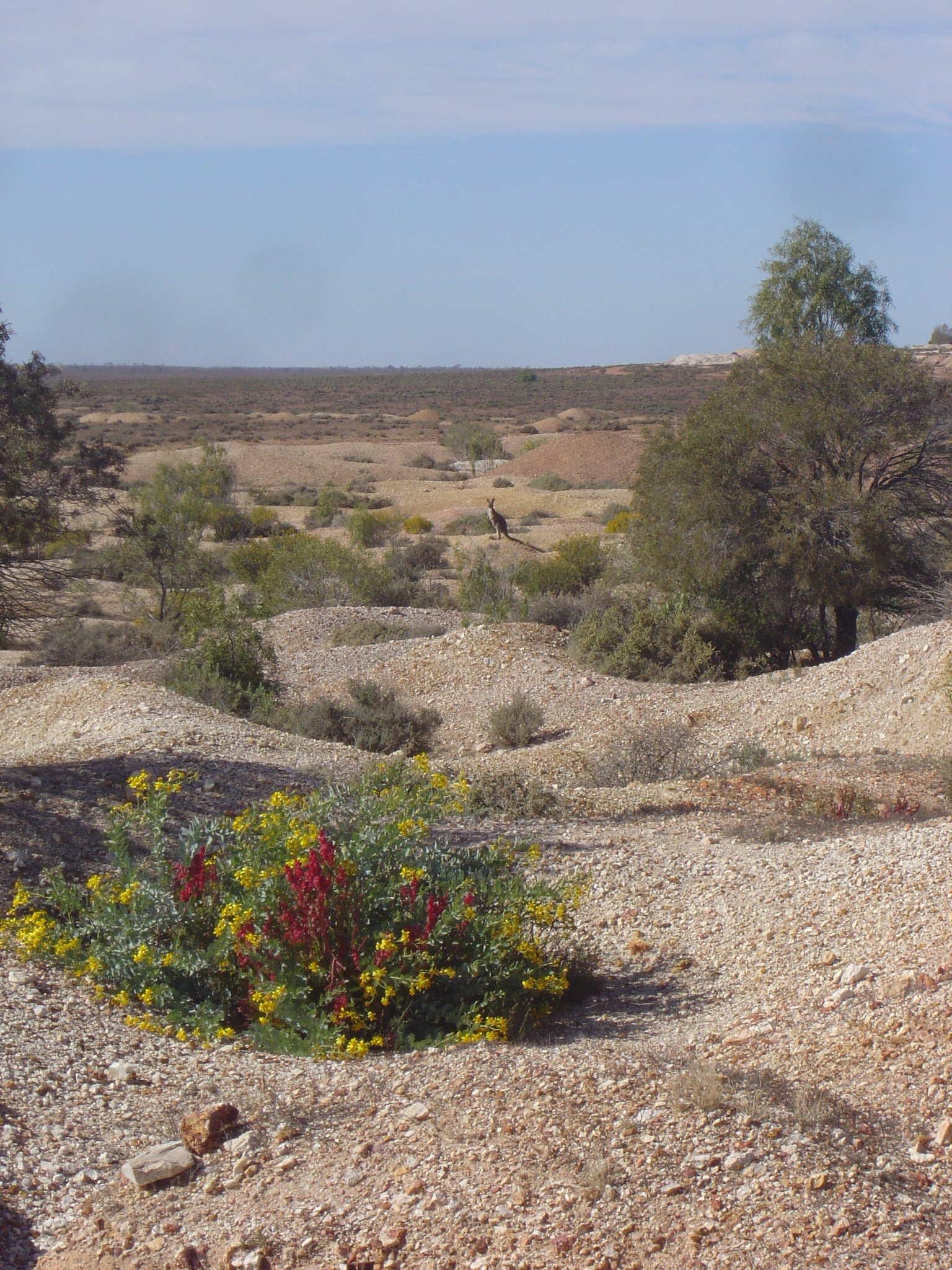 The contrast of colours of the plants compared to the mullock heaps of the mines is wonderful. As in all opal fields there are also other interesting sights such as this entrance sign. 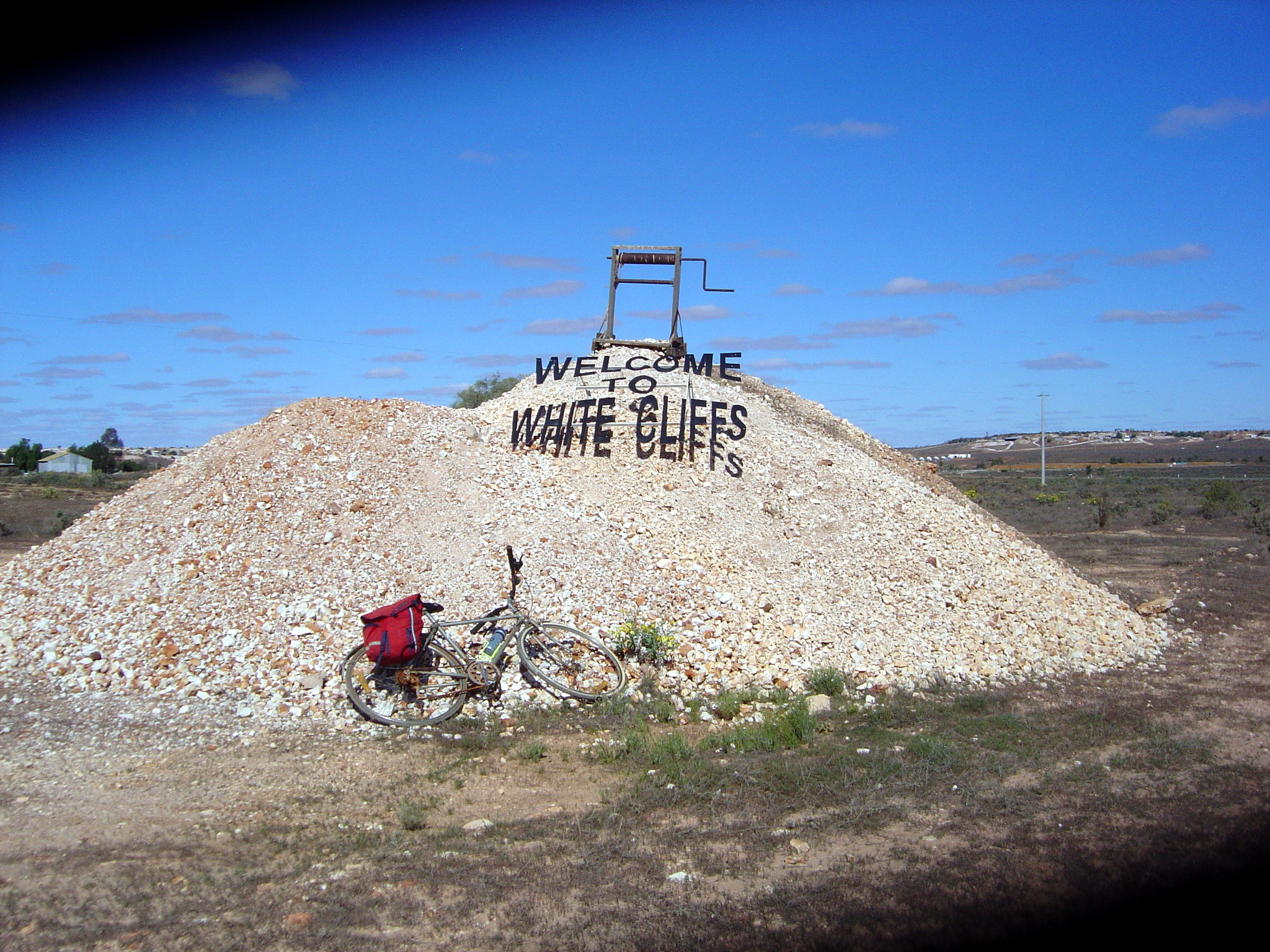 That is my bicycle at the foot of the dump. Unfortunately it later died when the bike rack snapped on the rough road out to Mutawintji. There are also some miners still trying to find opal here. 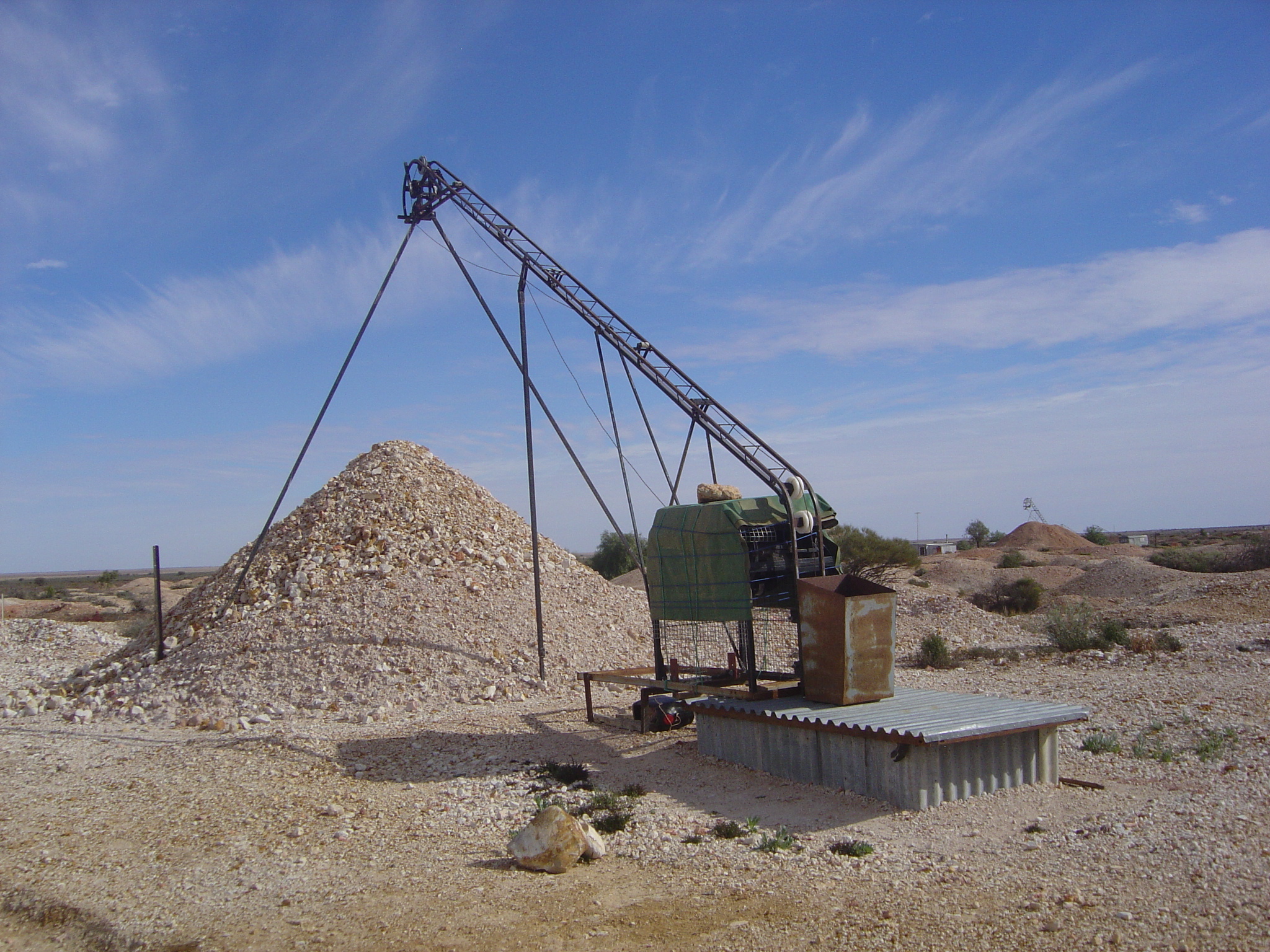 They use more modern methods than the early miners but it is still hard work. The picture above is of a modern miner at work. There are also those people with a great sense of humour as indicated in the next photographs. 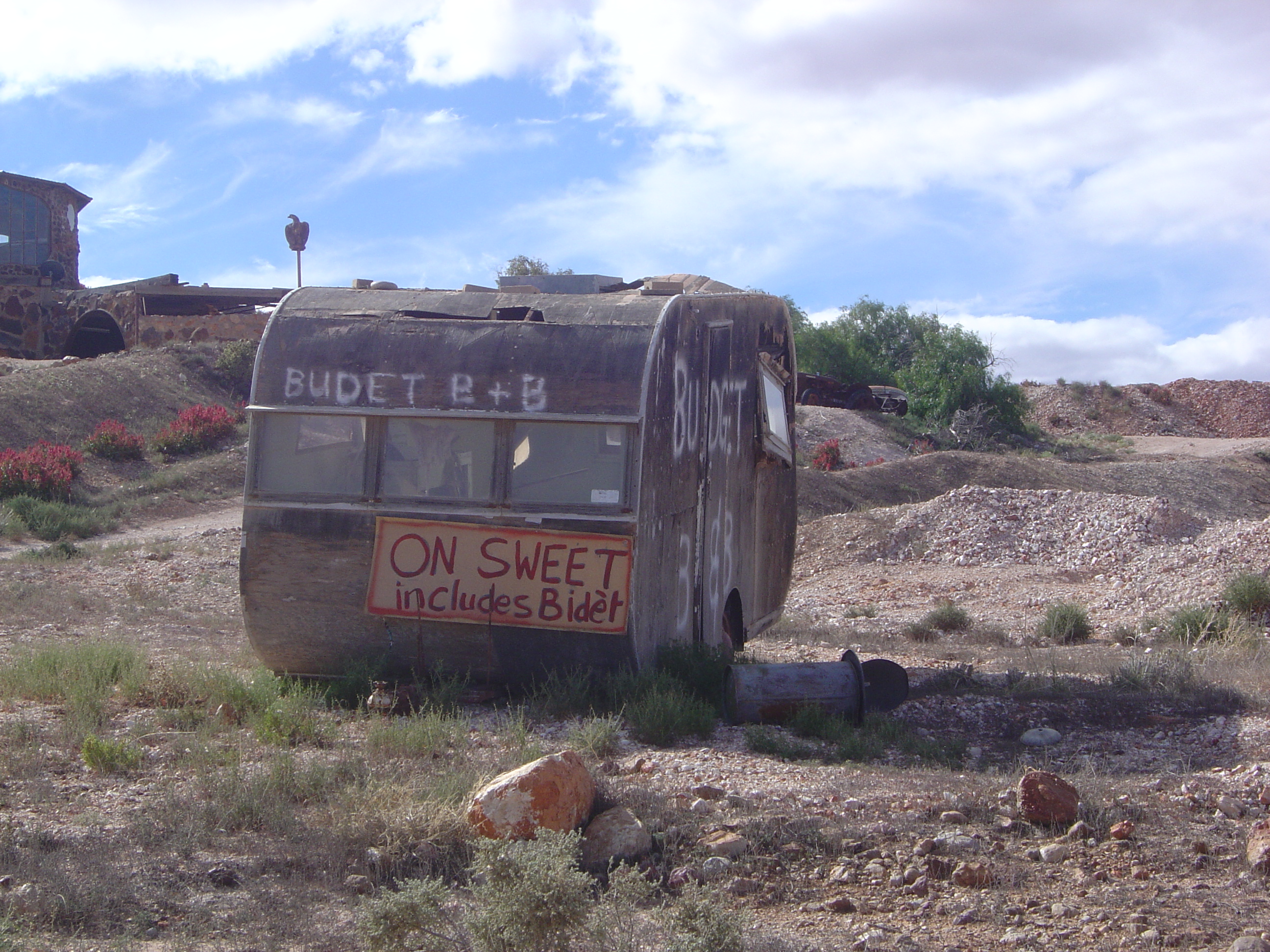 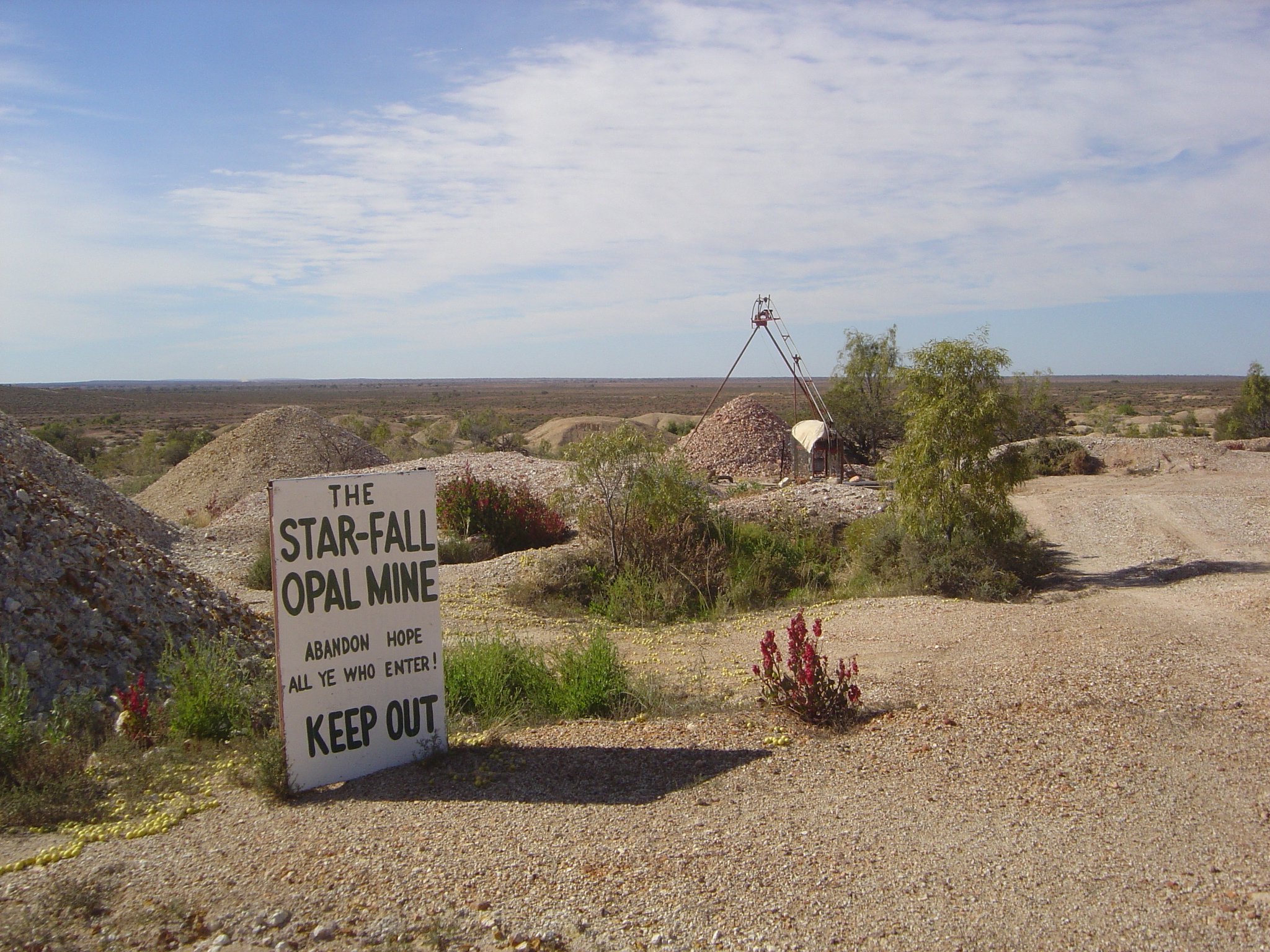 Visiting White Cliffs is not like visiting a normal outback town. It is about going back into history with a chance to see how sometimes desperate men and women travelled to an extreme desert region to chase that elusive gem, the opal. They faced extremely hazardous conditions of heat, lack of water and food, lawlessness and the need to carry out arduous labour to have any chance of surviving. Many were successful but probably the majority were not and either died here or had to move on.

Today, if you visit in spring or winter it is a very picturesque place and we have the luxury of a sealed road all the way. Food and drink is readily available and you can even stay in underground accomodation. You may even find an opal and if not you can purchase one from the miners here.