We have driven on the Stuart Highway many times but have always sailed past the turn off to Mintabie just a few kilometres past Marla. This time we were determined to visit Mintabie as it is only about 35 km off the Stuart Highway.

We camped at the Marla Road Station Caravan Park, which by the way, is a lovely grassed park with all amenities including power. Leaving our van here we set off quite early to Mintabie. The road in was a little corrugated but easily accessible in the dry by most vehicles. 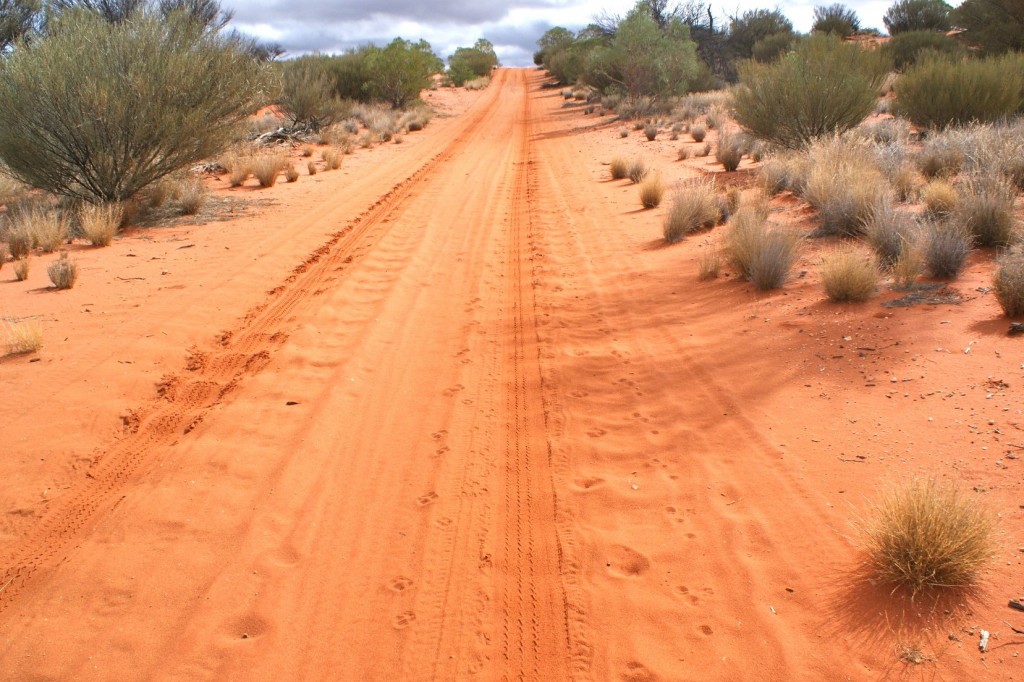 After 35 km through interesting desert scenery we approached the escarpment where Mintabie is situated. This escarpment has been carved up by bulldozers and excavators as the miners have searched for the opal buried deep in the hard sandstone of the area.

Mintabie is still an interesting place to visit. The streets are wide and the buildings seem to be placed in an erratic fashion. I don't think the Town Planners were involved here at all, but it adds to the interest. There is a hotel with a caravan park and I am told there is another caravan park here as well, however I did not see it. There are two stores, one at either end of the town. There is also a school and an all weather airstrip and an Information Notice Board in the Town Square. 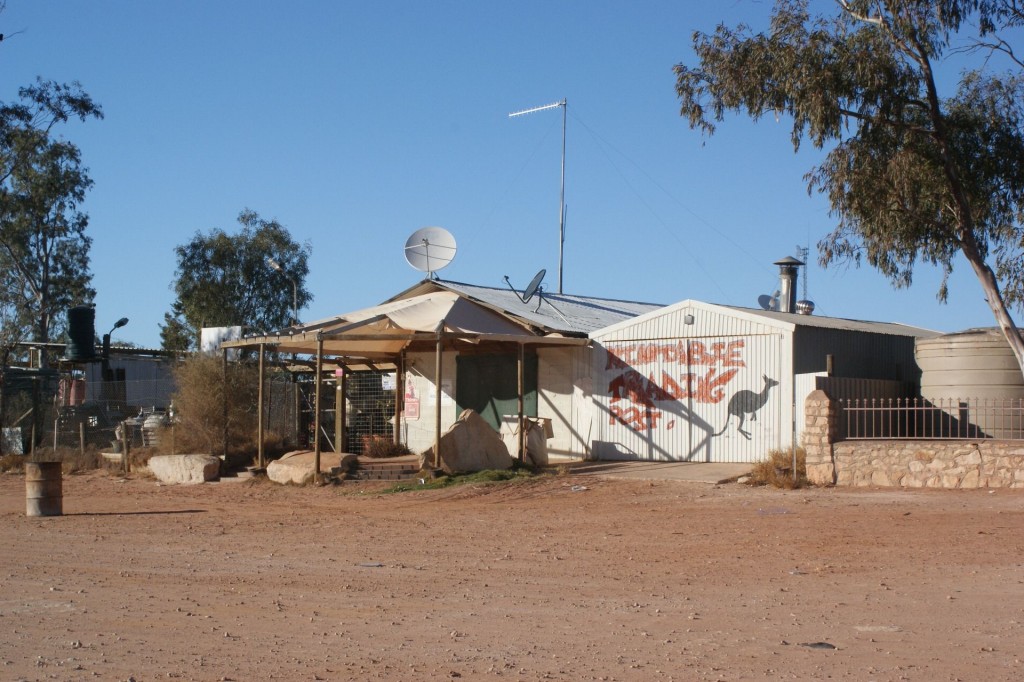 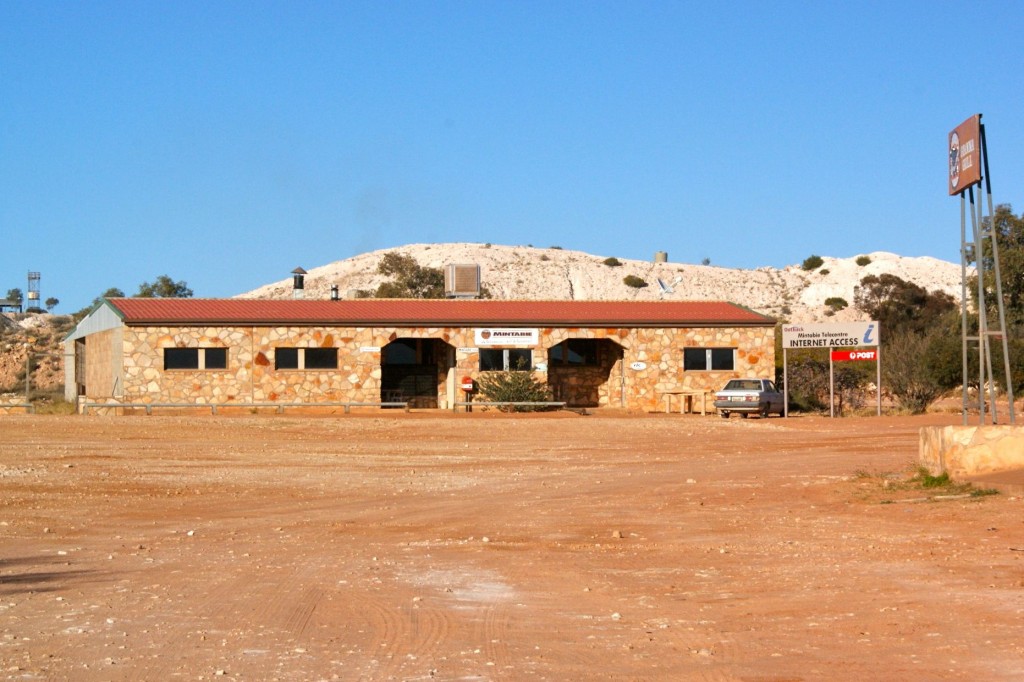 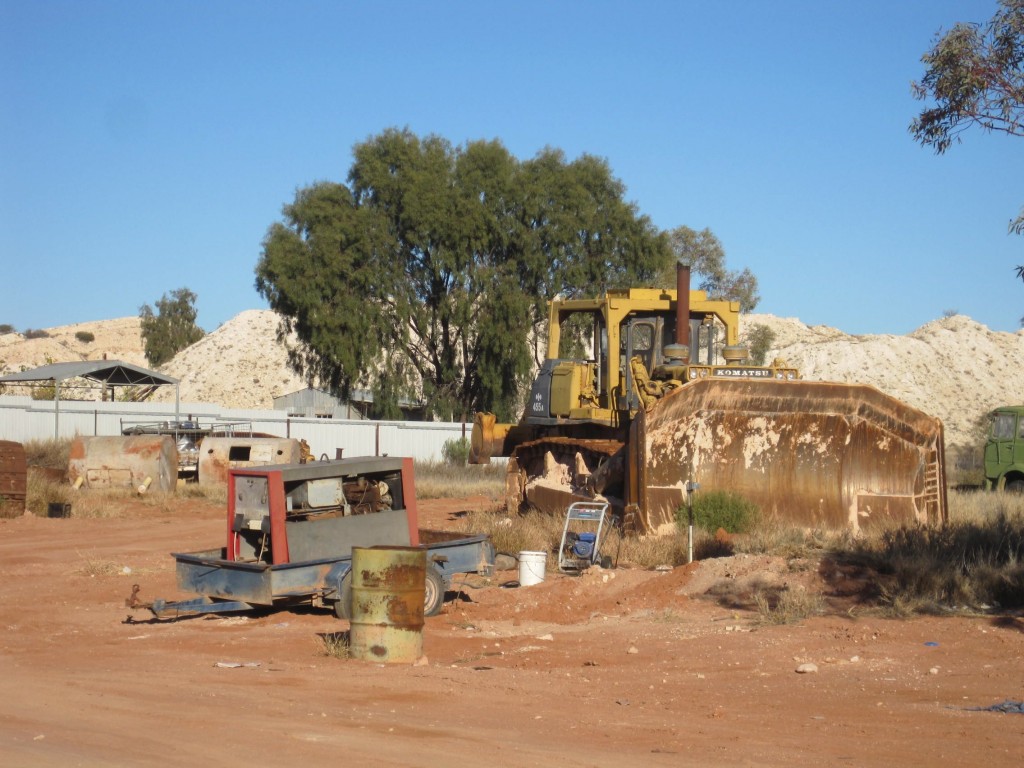 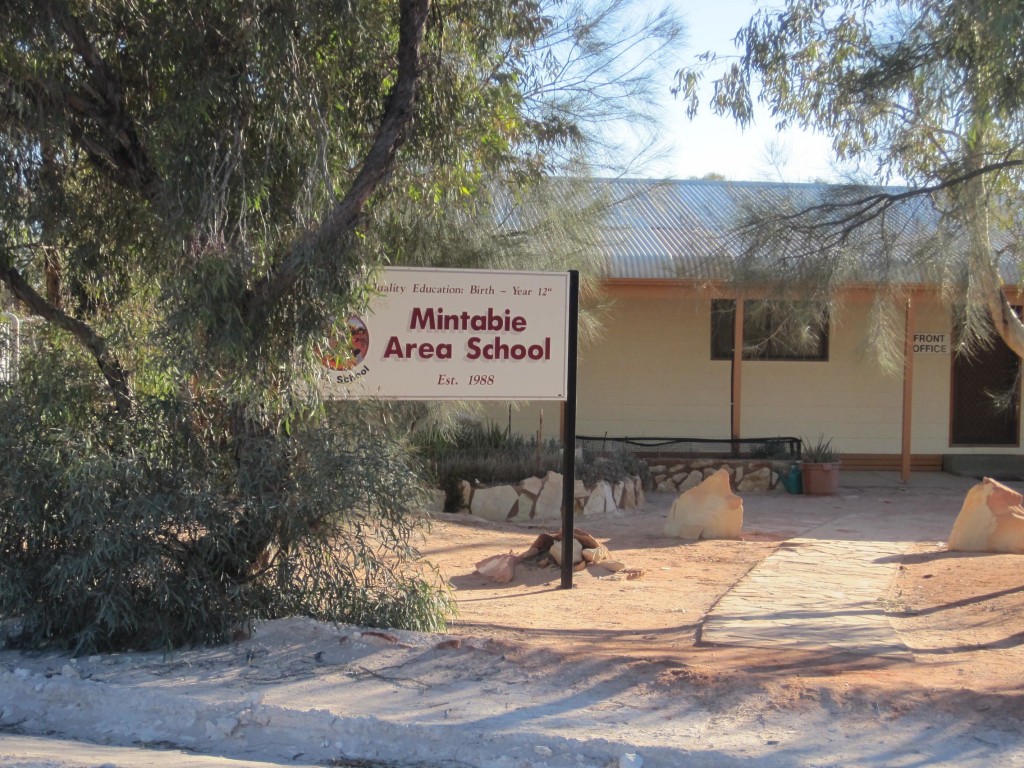 I was , of course, very eager to have a go at fossicking for opal. At Coober Pedy fossickers are frowned upon because of the great danger of falling down the very deep shafts. Here at Mintabie there are not the same problems, as the area, since 1976, has been mined using large machinery such as bulldozers and excavators. These machines have carved out extremely deep holes (over 20 metres deep in parts) to reach the opal layers. 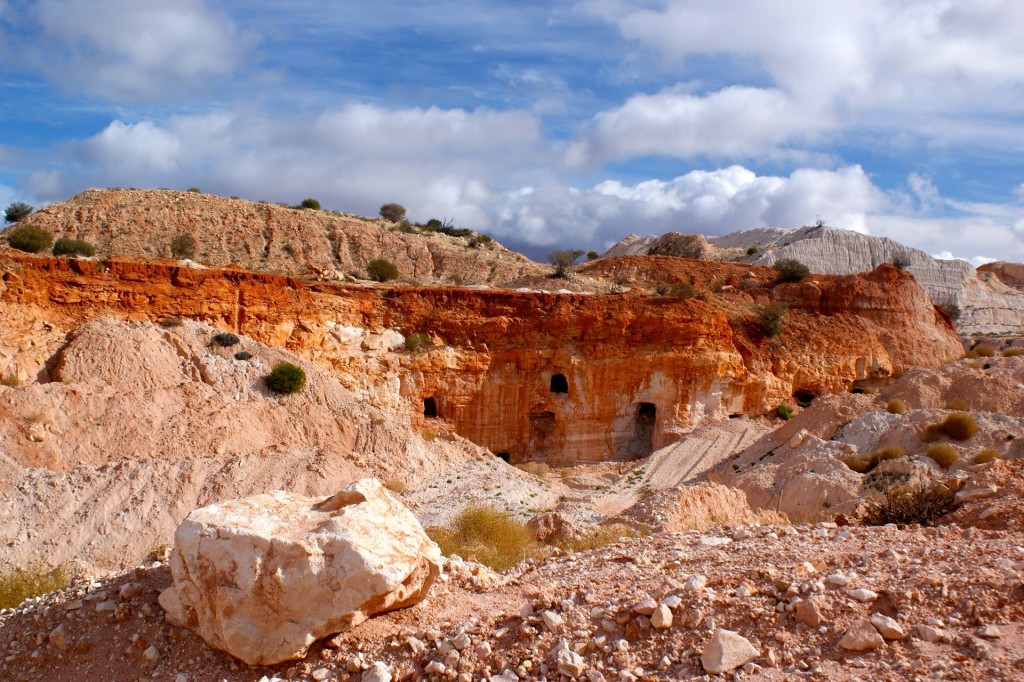 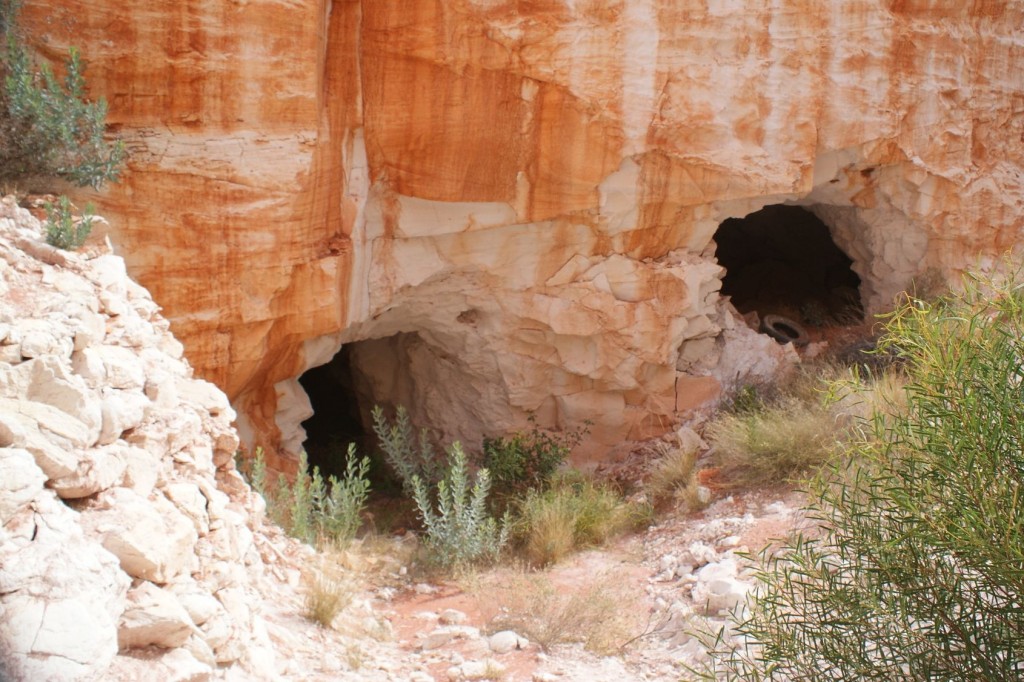 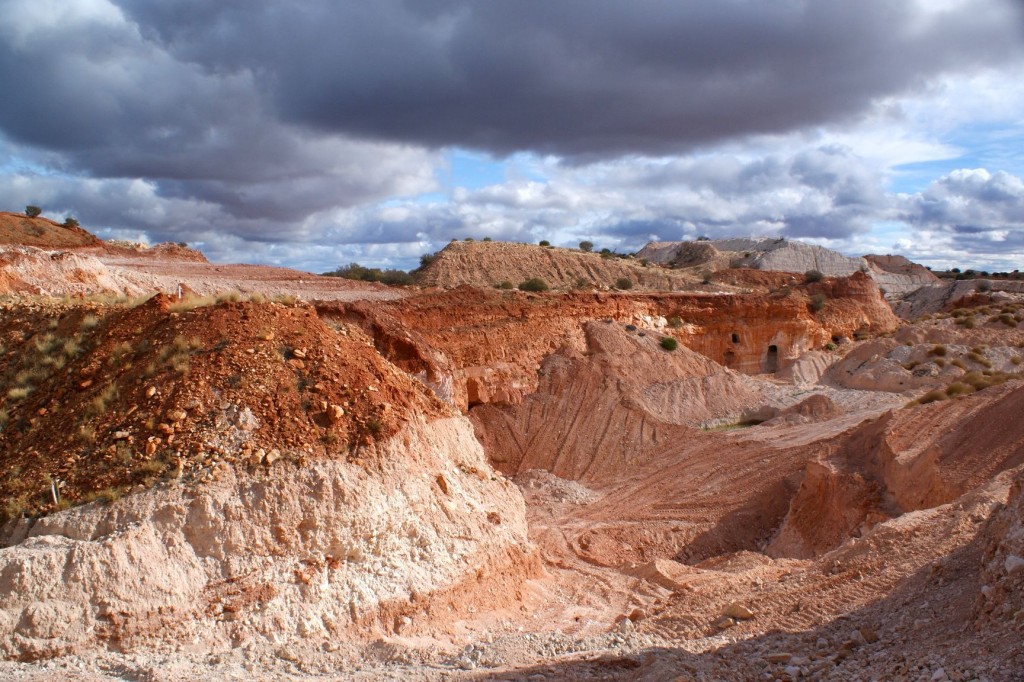 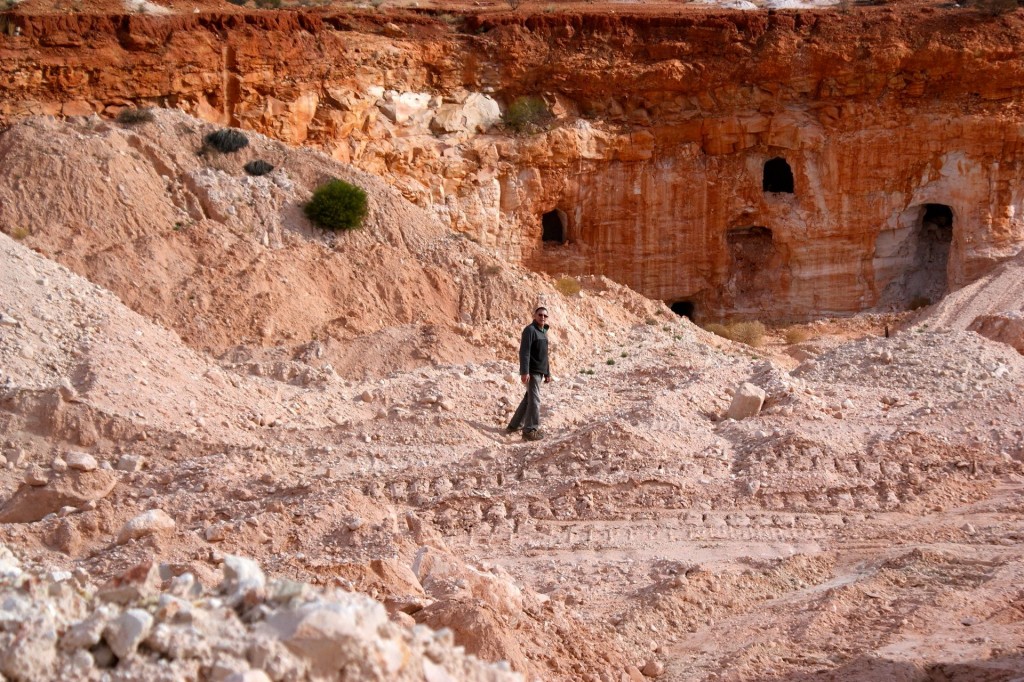 Once the layer was reached the miners would carefully follow the machines as they ripped the surface of the opal layer and pick up any opal that had been exposed. The opal here occurs in thin to thick layers and not in small pockets as at Lightning Ridge. There is always the chance for the fossicker to pick up some that the miners have missed and the locals don't mind you looking as long as you do not trespass on an existing pegged site.

While not greatly successful, I did pick up a number of pieces of thin black potch with some colour and will have great fun cutting these in the near future. I think there is more chance of fossickers finding opal here than at any of the other fields simply because less people visit here. At Lightning Ridge most of the mullock heaps have been picked up and washed to collect all the small pieces left by the original miners and noodlers have just about removed all that was left at Andamooka and Coober Pedy.

If you are not a fossicker, Mintabie is also a great place for photography. The white sandstone opal dumps contrast brilliantly with the reds and oranges of the desert sands and the greens of the mulga and mallee trees which abound in the area. There is also the interesting aspects left by the miners. Holes which were the tunnels dug by the original miners high up in the sandstone walls create interesting patterns and there are old ruins and wrecks of old machinery laying about. While I was out fossicking, Barbara was taking the photo's. If you double click on them you will get an enlarged image. 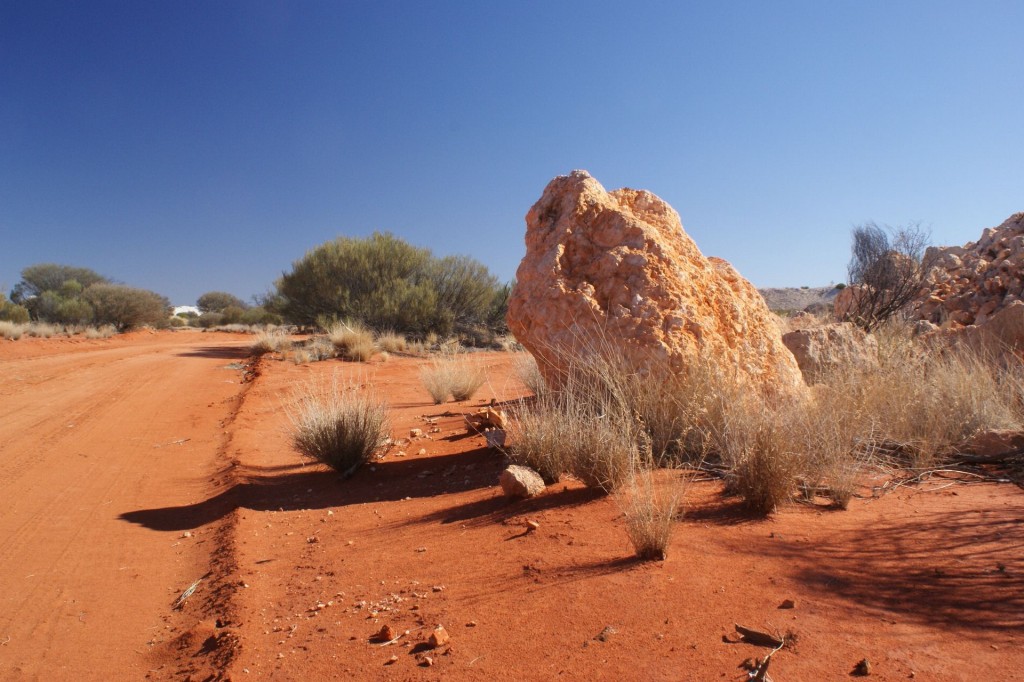 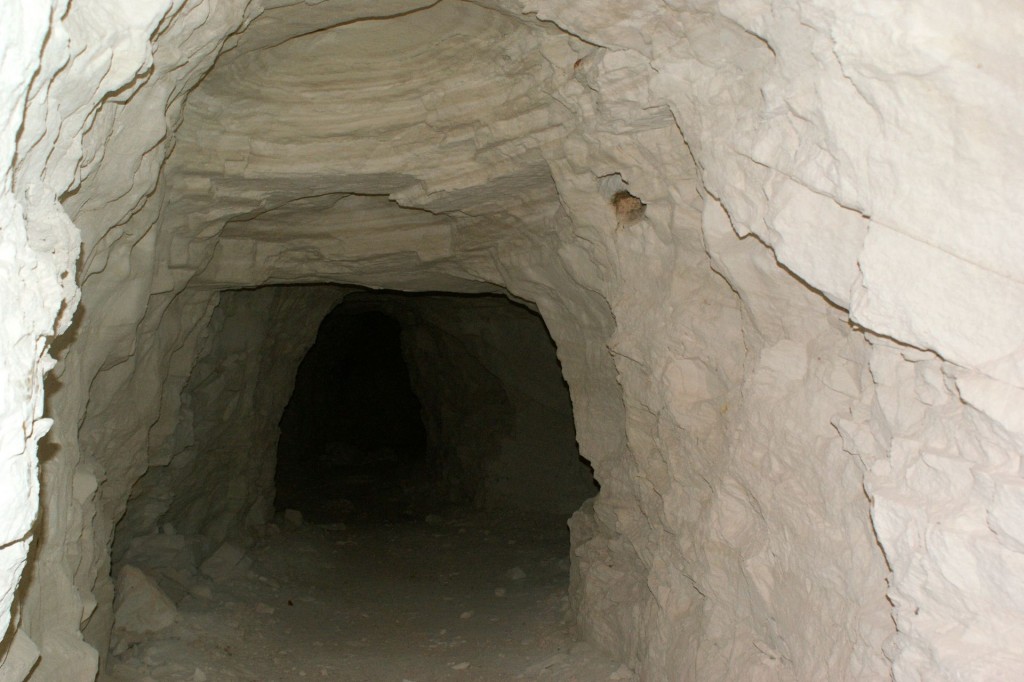 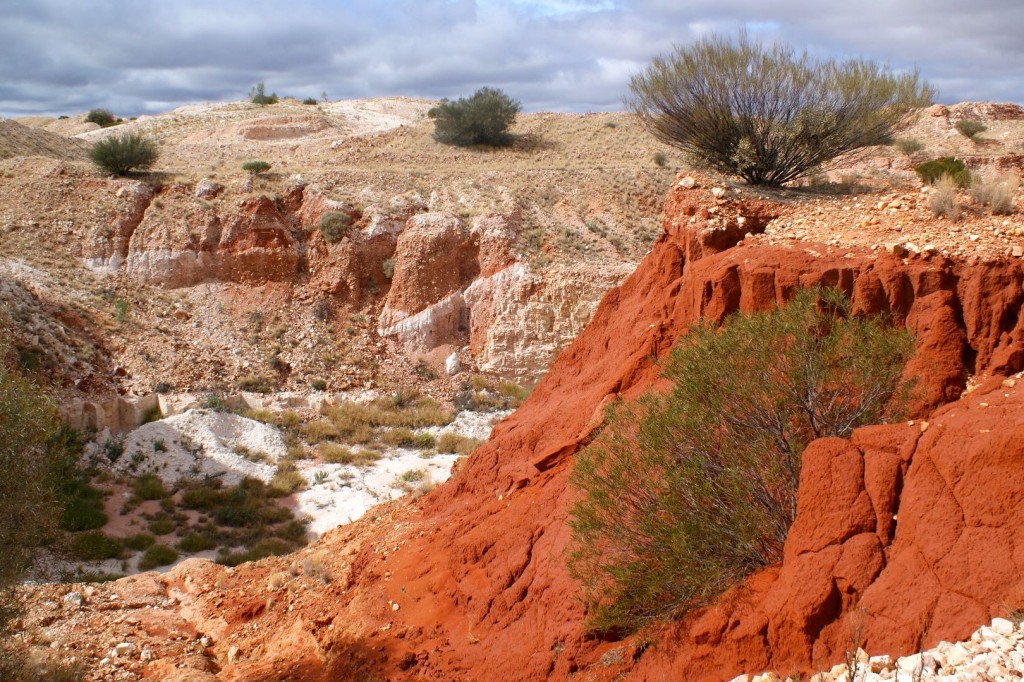 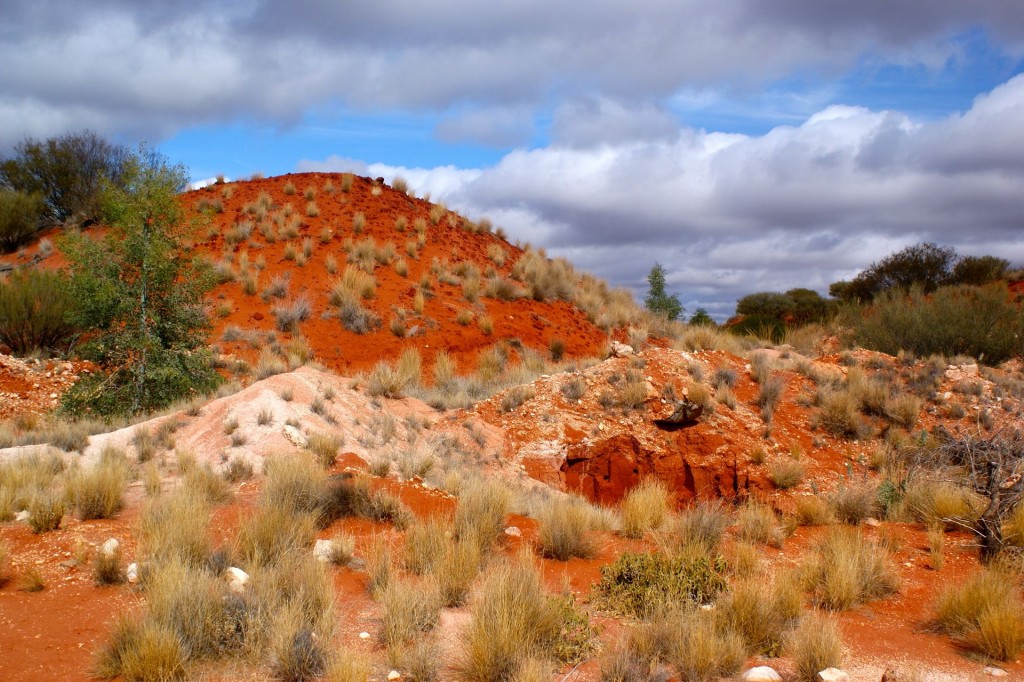 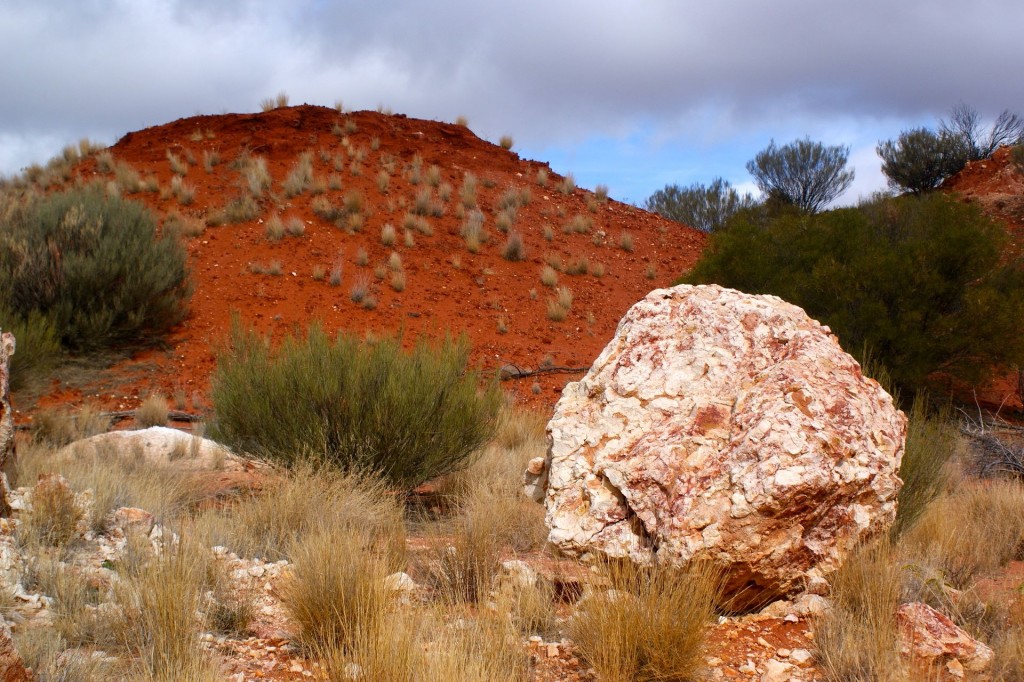 Mintabie has quite a history and few know that in the 1980's Mintabie was the biggest producer of opal in Australia in terms of the value of the opal. It is also not widely known that Mintabie also has produced a lot of black opal as it is widely reported that black opal was only found at Lightning Ridge. It is also found in small quantities at Andamooka.

The local Aborigines were reportedly the first to find opal here and sold this opal at Coober Pedy just after the 1st World War. Around 1920, Larry O'toole, a well digger in the area, struck opal and from then on interest began to grow in Mintabie.Well diggers are attributed to finding opal in other areas as well, Andamooka being a prime example.

The early miners were a hardy lot. The weather conditions at Mintabie are extremely harsh with very high temperatures in summer and a general lack of water. This, coupled with the extremely hard sandstone rock which the miners had to dig through to find the opal, ensured that progress in developing the field was very slow. In the late 1970's, a Croatian miner found a huge deposit of opal at Mintabie and many other miners were again attracted to the area. This time they brought in large machinery to open cut the area. The open cuts were very deep, over 20 metres in part and this required great skill by the operators as the leases were only 50 metres square in size You can still see machinery in action here and how the operators do not topple the machines over the edges of the vertical faces they have created I do not know. The use of machinery allowed the large amounts of overburden to be removed relatively easily and quickly compared to the pick and shovel of the early miners, but it was still a costly business as large dozers are not cheap to run, and fuel and parts have to be brought in from long distances away. (Adelaide is 980 km away and don't forget the Stuart Highway was just a dusty track in those days) If you did not find a lot of opal you would soon go broke and many did. However many of these miners did find massive amounts of very beautiful opal and Mintabie, for a while, produced more opal in value than any place in Australia and probably, the world.

Today it is a different story. There are still a few miners excavating at Mintabie and hoping they find a big seam of opal. Costs of fuel are skyrocketing as is the cost of labour and parts. Most of the opal miners are older now with very few younger men interested, The labour is hard and dirty and the rewards are not guaranteed. It is a lot easier to earn a good wage at one of the big mines than take the risk of looking for opal. When the current miners retire it appears that the opal fields will become a memory of the past unless a really big find is made. This is the hope of those still working the fields.

Mintabie is also interesting because of its history associated with the local Indigenous people. It is situated on the Anangu Pitjantjatjara Yankunytjatjara or "APY" land. The locals won the freehold title to the land in 1981 after a very bitter battle. As part of the negotiations , the Anangu people agreed to lease back to the Cown the small parcel of land on which the town of Mintabie sits. There was a prolonged battle between the miners of Mintabie and the South Australian Government over this Land Rights Bill.

A new Bill was introduced in 1980 called "The Pitjantjara Land Rights Bill 1980" which proposed granting Anangu title to a large area of land which included the township of Mintabie. It also recognized that opal mining could still occur with certain conditions. The Mintabie township was deemed to have been leased to the Crown for a period of 21 years. There are still disputes going on with the Mining Community adamant they should still be allowed to live and mine here as they have done for a long time. They have invested in buildings and businesses in the town and feel they have the right to stay. How this will be resolved is hard to say.

Up to recently you had to get a permit from the Marla Police Station to visit Mintabie. At the time of our visit this has been relaxed but anyone contemplating a visit should check at Marla.

The 70 km round trip from Marla to Mintabie is well worth the effort even if you are not an opal enthusiast. You will see some remarkable scenery and a slice of history showing the hardships of those who chose to chase the chance of a big opal find. If you are into opals there is always the chance you will find that piece you have been looking for. The future of Mintabie is uncertain so it is best to get there while you can.

I hope you enjoy the photos attached to this. We enjoyed the trip as well as chatting to the locals and I would hope to go back there one day.

How Opal was Formed