A short time after I had published the story of Minnie Berrington I was contacted by Stuart Wattison who had carried out a lot of research into Minnies life. He had dug up copies of certificates including her Miners Right and this has added authentication of her story as told in her book "Stones of Fire". Stuart has now written her story and has kindly agreed to let me publish it on this website. The following is her story as written by Stuart Wattison.

During the 1990s my wife, Terry, and I spent a few days in Coober Pedy and, among other things, visited the Old Timers Mine. In this tourist attraction were several mannequins representing early miners. One of these was Minnie Berrington, the first female opal miner in Coober Pedy (see Note 1). The significance of this did not emerge until later. During a period while I was working on a fly-in / fly-out basis at remote sites in Queensland and Western Australia, Terry took a part time job looking after old folks and disabled people. One of her clients was called Minnie Berrington. I met her only once. She was then 101 years old, very frail and with failing eyesight but still mentally sharp. During our conversation she revealed that she was the Minnie Berrington represented in the Old Timers Mine and had written a book 1 describing her experiences in Coober Pedy and later in Andamooka. Despite her small stature (see note 2) she sank her own mine shafts with a pick and shovel but was later introduced to the use of gelignite then very much considered a man's job.

Below is a Portrait of Minnie Berrington by Emil Otto Hoppe? 1930 2. 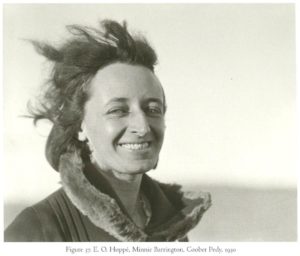 The SS Bendigo on which Minnie Berrington arrived in Australia

Her ancestry can be traced back to the Plantagenet kings of England, 1154 - 1485 3. Prior to her trip down under she worked in London as a domestic servant and as a shorthand typist before that 4. Wishing to improve her situation she set sail from Tilbury with her youngest brother, Victor, on 17th December 1925 on the SS Bendigo, arriving in Adelaide on 3rd February 1926 8 (see note 4). She traveled under an Assisted Passage Scheme for domestic helpers and took a pre-arranged job in Kingswood with "Mrs. O. Hyman" 4, the wife of Australian Rules football player Oscar Henric Hyman 1877 - 1955 5, on her arrival. Victor soon joined a group of bush traders. In spite of signing, prior to leaving England, an "Undertaking To Engage In Domestic Duties In Australia" for at least twelve months 4, Victor's enthusiastic letters to Minnie encouraged her to travel north. In June 1926 she boarded the Afghan Express (The Ghan) to William Creek. She was quite overwhelmed by the outback, describing the spectacle of sunrise between Beltana and Marree in her book as follows:

"The enchantment of that golden serenity was so complete that I knew that I'd never willingly live in the city again."

At William Creek she was met by Victor and the supplies van which took her via bush tracks to Coober Pedy. The search for opal commenced and she and Victor built a bough shed which they called Bush House 1, after the large building with the same name in London and probably also because of its setting. This soon proved to provide insufficient protection against the infrequent rain so they moved to "Turley's" dugout, the first of several, which offered better protection against both the rain and the scorching summer sun. She was soon struck by "opal fever" (see note 5). Her income from mining was supplemented by working as a shop assistant at Jacob Santing's store 3 (see note 6). She also learned to drive, by her own account a rather hair-raising experience for her instructor (Not so fast, not so fast), and acquired a two-seater car, with a partly dismantled dicky seat at the back and popularly known as The Red Terror 1, so could deliver stores to those who did not have their own vehicles. 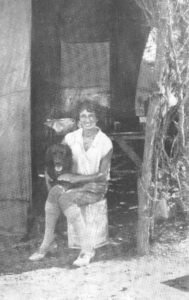 "Myself and Taff outside bough shed Roger and I built" from Stones of Fire.

In the early 1930s there was a persistent rumour of a new opal field "near Pimba" but this was largely disregarded. When Minnie returned from a few weeks holiday over the 1933 Christmas period (see note 7) she found new interest in this rumour. A knowledgeable interstate opal buyer, probably Ernie Sherman 10, who had bought a parcel of opal from South Australia declared that it did not come from Coober Pedy. This and memories of an occasional buyer saying that he had once purchased a parcel of opal on a sheep station called Andamooka prompted plans to be made for a move and about a week later she set off by road in convoy (see Note 8) on the more than 350 mile (560km) trip via Kingoonya and Pimba (see note 9). She now became the first female opal miner in Andamooka and was a driving force in the development of the opal field 10. While she was a successful opal miner including finding some of the prized black opal 1 she undertook a variety of jobs including driver, general store assistant, police agent and census taker. The items which refer to her activities in Andamooka, can be found in the opal museum below the Andamooka Post Office.

In August 1942 she enlisted in the Australian Women's Army Service, which was formed a year earlier in order to release men from administrative duties for redeployment to fighting units 16, and was stationed at 6 Australian Base Ordnance Depot, Torrens Hall, Adelaide 17. She fibbed about her age to enhance her chances of enlistment. Her pay record shows her age as 41, not 44 years and 10 months, and date of birth as 9th October 1900 even though the maximum age of enlistment in the A.W.A.S. was 4516. In September 1942 she was transferred to 3 Australian Central Ordnance Depot (probably at Keswick) where she worked as a typist and later as a clerk 18. Her Staff Sergeant was so pleased with her work that he sent her a note, dated 22nd May 1943, which reads:

"Your devotion to duty, & good work has been an inspiration to this section. I do thank you most sincerely for all you have done for me." 19

With the exception of a period in July and August 1943 when she attended 5 AWAS NCO School, she remained at 3 ACOD until March 1945. She was then transferred back to 6 ABOD where she received her promotion to Corporal on 4th January 1946. When she was discharged in February 1946 she returned to Andamooka to continue her prospecting activities.

In the early days of the opal field, the mail was brought from Pimba only as far as the Andamooka Station Homestead 12. From there it was brought the 30 miles to the opal field by a person who was paid one shilling a week by the residents 12 to make the trip. In mid-1940 the mail contractor offered to extend the service to the opal field. By 1946 the population had grown sufficiently for E.H.D. Russell, the member for the electorate of Grey, to make representations to H. H. Miethke, the Acting Deputy Director of Posts and Telegraphs regarding the establishment of a Post Office. This was agreed and the non-official Andamooka Opal Fields Post Office (renamed Andamooka 2nd July 1990 21) opened on 13th January 1947 with Minnie as the first Postmistress 20. 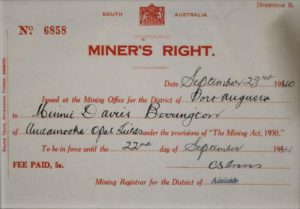 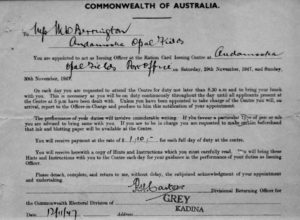 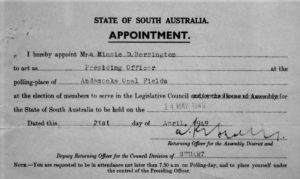 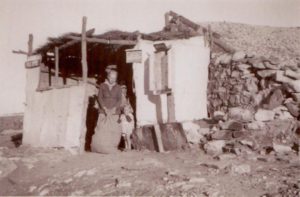 In addition to handling the mail, this office sold Postage Stamps, related items and Postal Notes but provided no Money Order, Telephone or Telegraph facilities 22. About a year later Old-Age Pension Payment facilities were added. Opening hours were 9am to 10am and 3:30pm to 4:30pm, except Sundays. In April 1947 Minnie requested an arrangement for issuing Miners' Rights. In due course this was accepted and issues commenced in June 1947 11, 13. A separate Telegraph office was opened in December 1948 and the radio-telephone was installed in the dugout (home) of Sam and Rose Brooks. Rose was the operator until it became too onerous for her to handle and it was transferred to the non-official Post Office in May 1965 after Minnie had left Andamooka 21. Minnie remained Postmistress until late 1949 and finally left Andamooka for health reasons in late 1951 or early 1952 (see note 10).

During the next six years she lived in the Adelaide suburb of Goodwood and worked as a typist 24, 25. It must have been during this period that ?Stones of Fire? was written. The typed manuscript was completed in 1956 26 and following editing work with the publisher Minnie traveled overseas in 1957, disembarking on her return at Fremantle on 17th October 1957 27.

In late 1961 or early 1962 she moved to a stone cottage purchased jointly with Victor in Quorn 29, 30 while Victor worked as a mechanic at the coal mining town of Leigh Creek 28. About two years later Victor joined her and worked as a radio mechanic 30 until he died suddenly on 4th March 1965 31. In 1966 she traveled overseas again. Returning from London, she arrived in Adelaide on 27th October 32 and, after a short stay in Glenelg 33 she moved to Magill 34, an eastern suburb of Adelaide. This remained her home for the rest of her life 35, 36, 37. She died on Friday, 13th April 2001 38 at the age of 103 (see note 11) and her ashes are buried at Quorn with her brother, Victor. 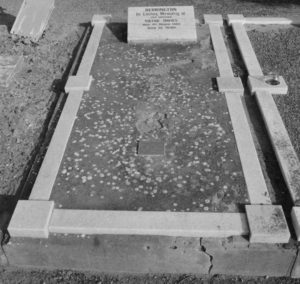 Minnie was a truly remarkable lady who never married and has a place in the postal history of South Australia. Reading "Stones of Fire" is recommended even for those without a strong interest in opal and opal mining. It is out of print but copies can be found on the Internet.

Thank you very much Stuart for this well documented account of Minnie's life.

Stuart has now advised me that his article is now available at the South Australian library. You can view it in a better format on Minnies Life.

Noodling and Specking at Andamooka

How Was Australian Precious Opal Formed