We had visited White Cliffs Opal field on a number of occasions but had not even considered that there were other fields discovered and worked in the area. While reading some of the old opal books I discovered there were quite a few areas worked around White Cliffs. This makes sense as miners would spread out and prospect all around the known sites in the hope of being the first to find a new deposit.

White Cliffs itself was discovered in 1890 by George Hooley and Alf Richardson, two kangaroo shooters. The story is, that while hunting kangaroos, one of their horses kicked up a bright stone which turned out to be opal. Looking around they found several more but did not know if they were valuable or not. They showed the stones to a surveyor working in the area. His name was Charlie Turner. He was not sure but sent them to Tullie Wollaston , one of the first opal buyers in Australia, to have them checked out. On seeing the stones he set off for White Cliffs and made an offer to buy them even though they were very different from the boulder opal found in Queensland.

Word slowly leaked out and by 1892 there were eighteen miners working at White Cliffs which is located on the Momba Station. In the next twelve months over eight hundred men had arrived on the field, some with wives and family.They camped in tents or made rude shelters of logs and canvas or even just slept out under the stars. Conditions were very primitive with shortages of water and food, but the town continued to grow. By 1897, there were over three thousand five hundred miners on the field and the diggings were spread over an ever increasing area as miners checked out the country around the original find.

The patches where opal was found had interesting names. Turley's Hill, Smith's Hill, Lena's Hill, Sullivans and Gemville which was originally called The Bunker were some of them. Many of the miners at White Cliffs worked under the Tribute System where they worked on a claim for the owner and were given a share of what they found. This obviously led to problems and when the system was scrapped and the miners were forced away from the profitable leases, many of them set off to Gemville which was about 15 kilometres from White Cliffs.

The opal at Gemville was of good quality with shafts averaging about 6 metres in depth. Mining continued at a reasonable rate until 1904 but then declined over the next ten years.

Today there are still a few miners working here but the field is largely deserted.

In 2006, Barbara and I decided to check it out. We were given rough directions from the store in White Cliffs and set out. We first obtained permission from the property owners whose house was close the track leading to the field. Just as we set off along the track and as we approached the first gate, we caught up to a vehicle and spoke to the driver, who was just closing the gate when we arrived. He was very surly and asked where we were going. I told him and he said we were trespassing. I told him we we had permission from the owners so he just drove off. We were a bit apprehensive at such a rebuff but decided to go on. I presume he was one of the miners working on the field at the time who did not welcome visitors. Luckily we did not see him again and kept well away from any of the camps on the field.

The drive in was on a rough track and was quite interesting. It passed over rough terrain and included a couple of dry creek crossings. 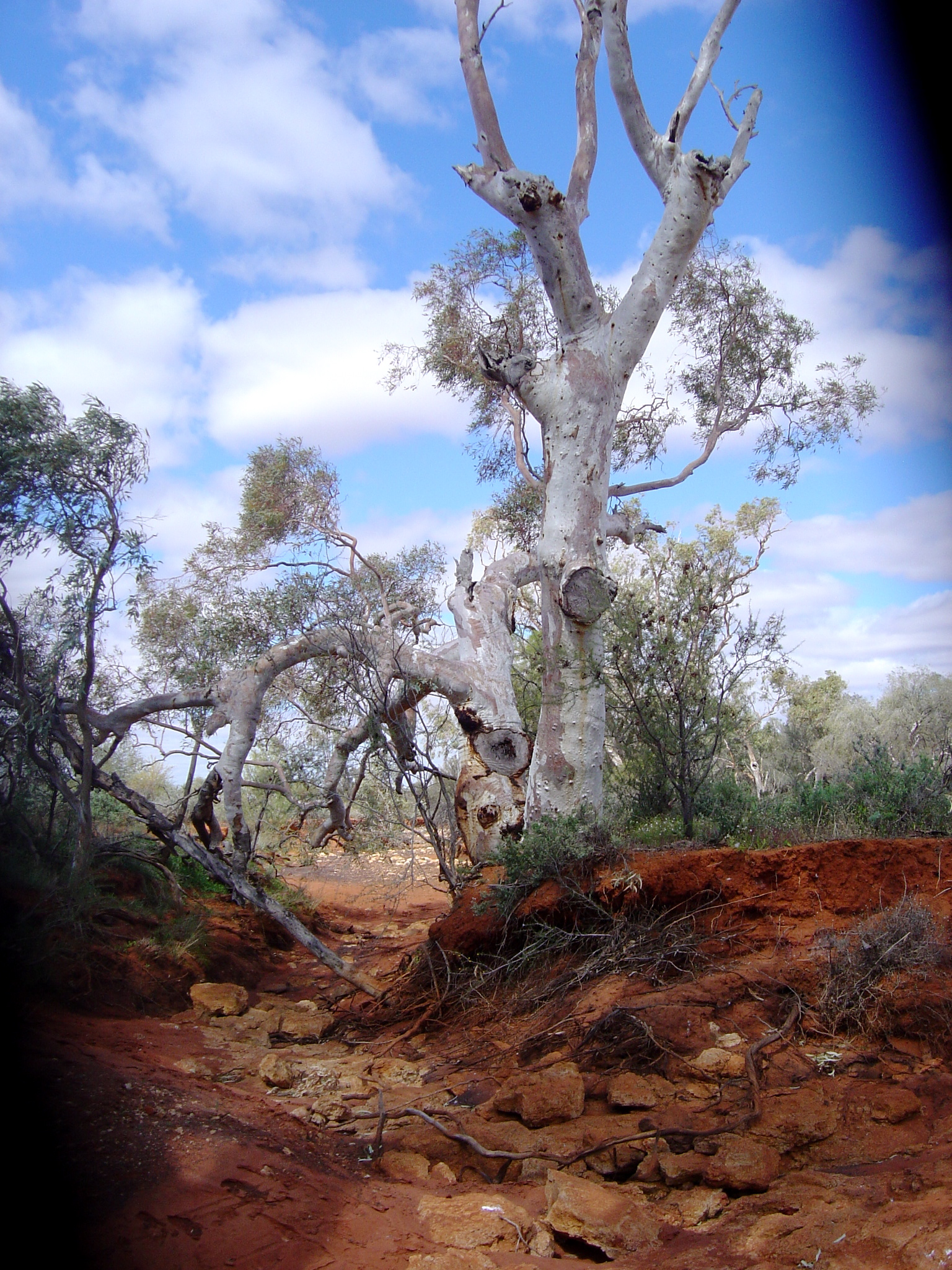 The opal field was largely deserted with only a couple of camps visible. There was no sign of anyone working on the day we were there but I was told there were a few miners spasmodically working here. The field looked like many other old fields before bulldozers have destroyed them. It was interesting to see the old style shafts where miners had dug by hand. 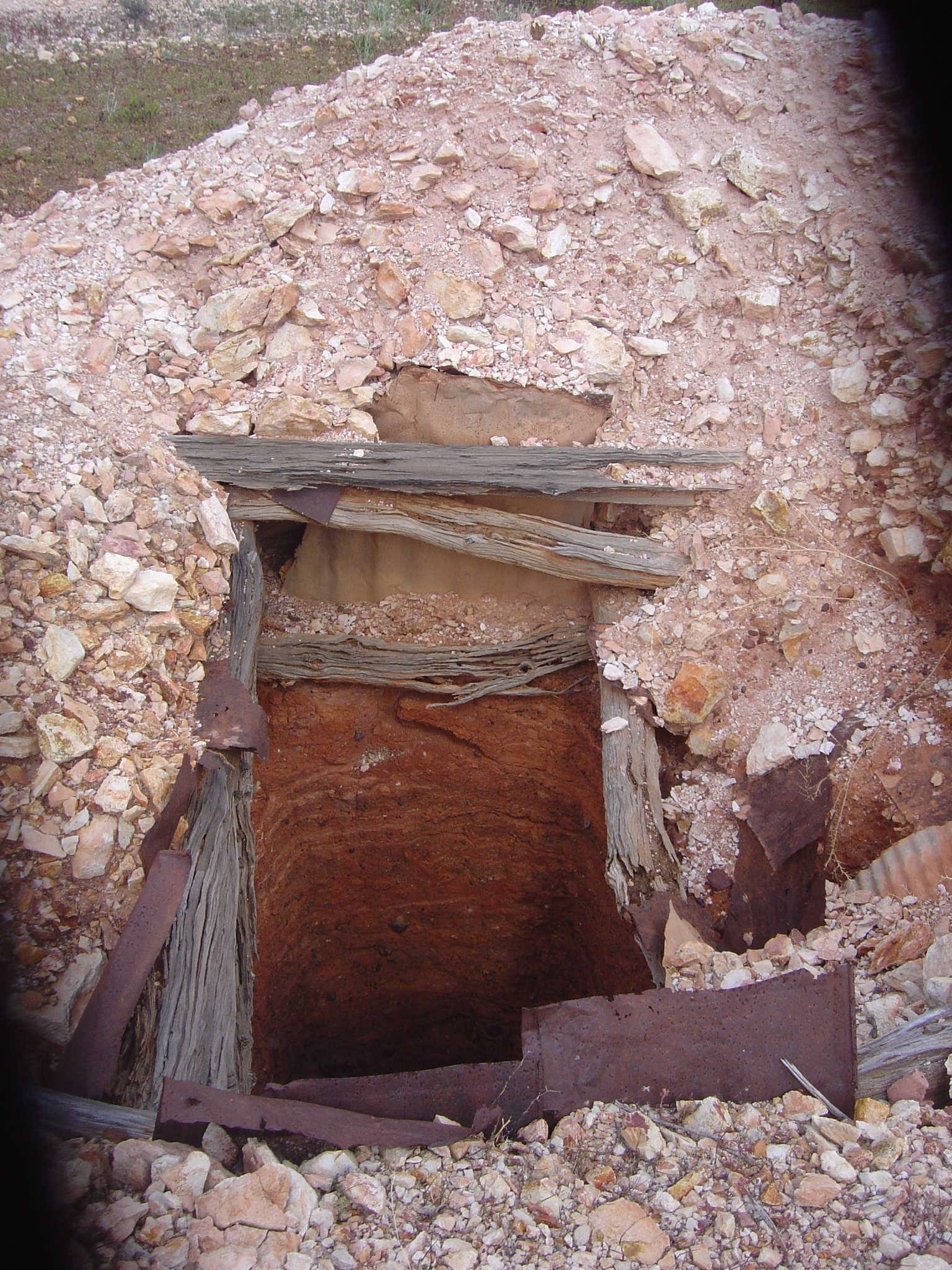 You can see the old timbers and pieces of metal that were used around the top of the shafts to hold back the mullock that was dug from the shafts and drives of the mines. I specked around the surface for a while but did not find anything. 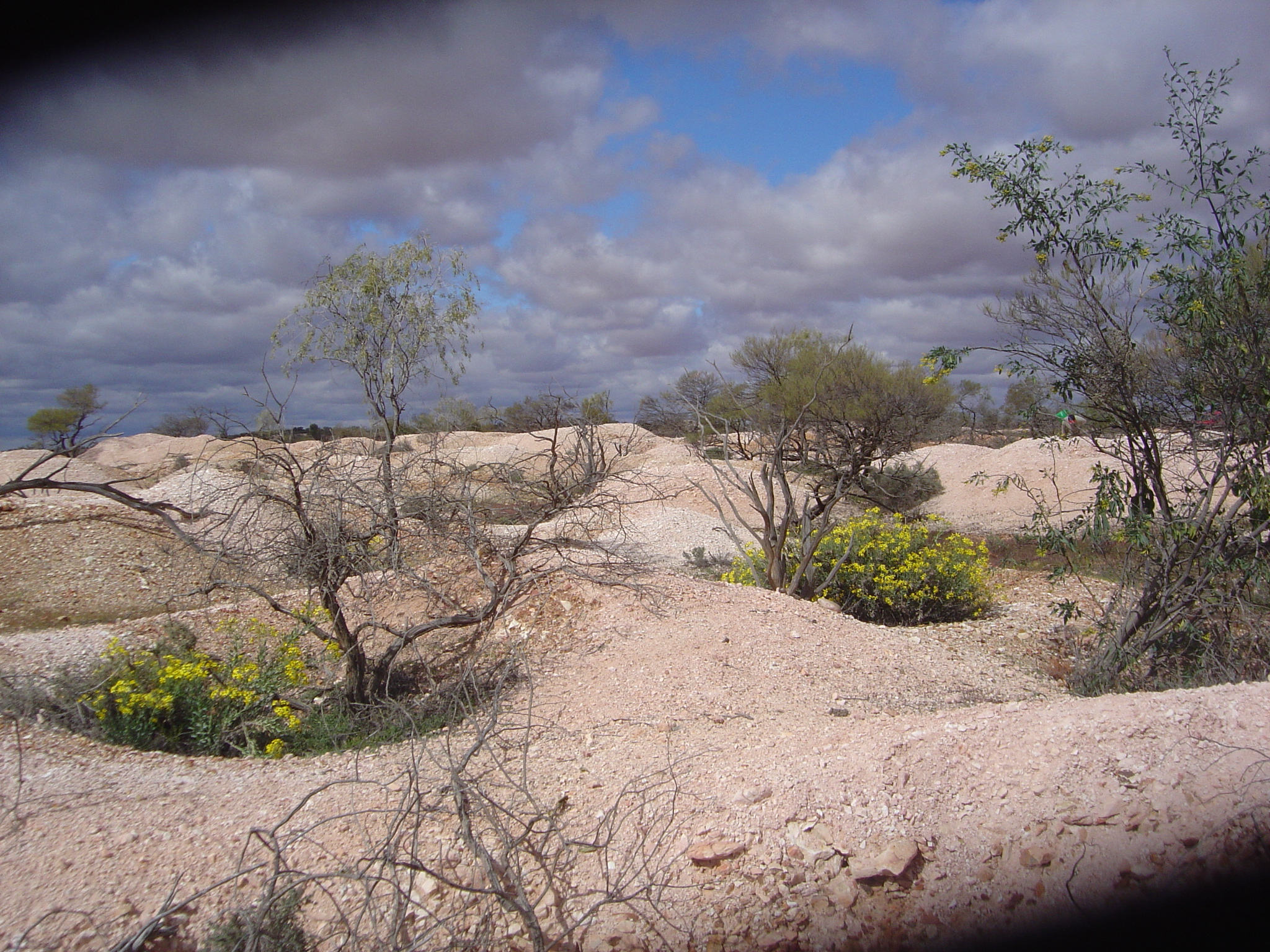 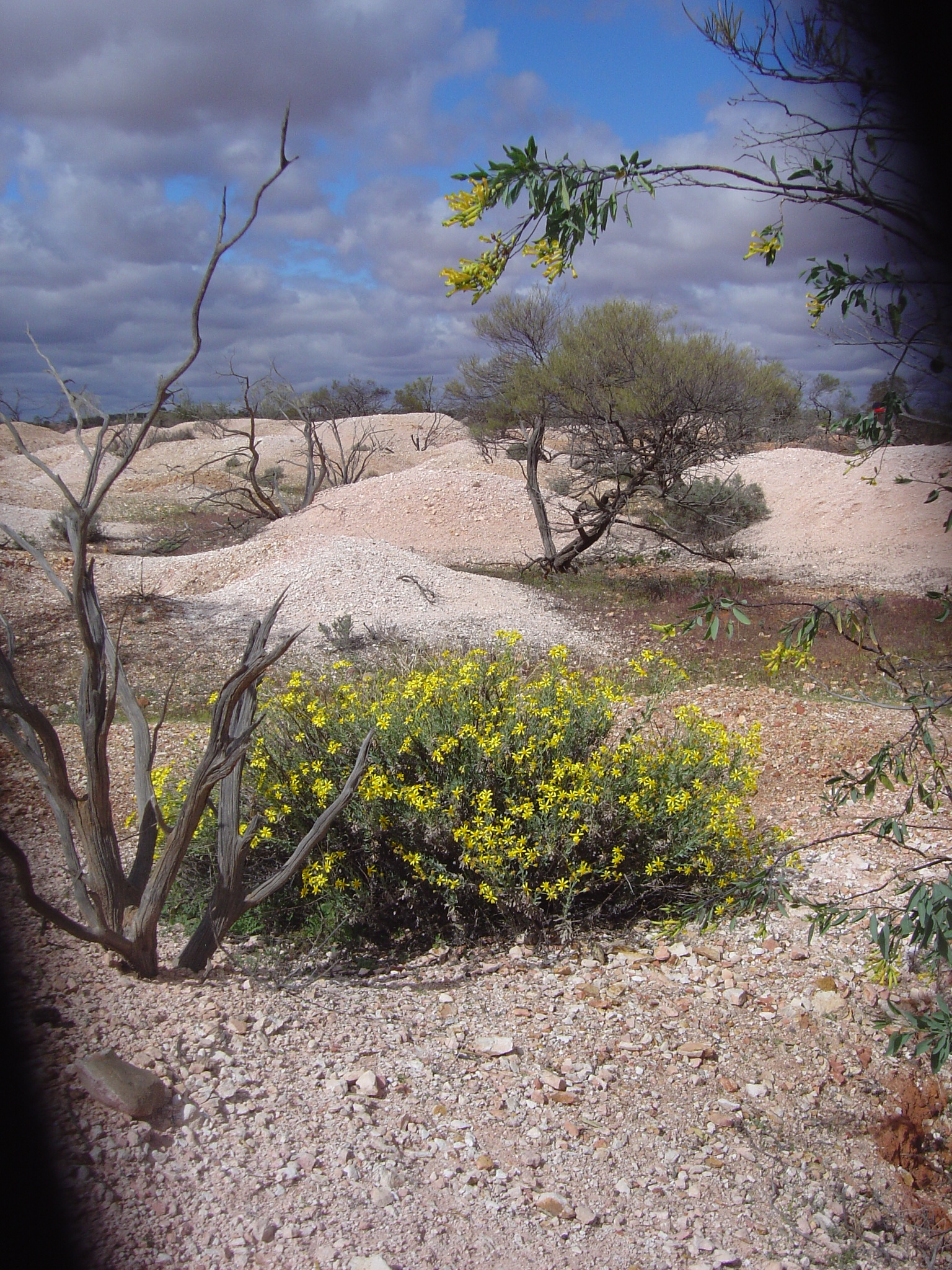 As you can see the field looks quite deserted. It is hard to imagine that hundreds of men swarmed over this field in the early 1900's but, I guess, the evidence is here. What hardships they must have overcome digging through the hard rock with primitive tools and with food and water being scarce. The lure of finding opal must have been very strong. In later years opal mining techniques improved but it was still not an easy task to obtain opal. 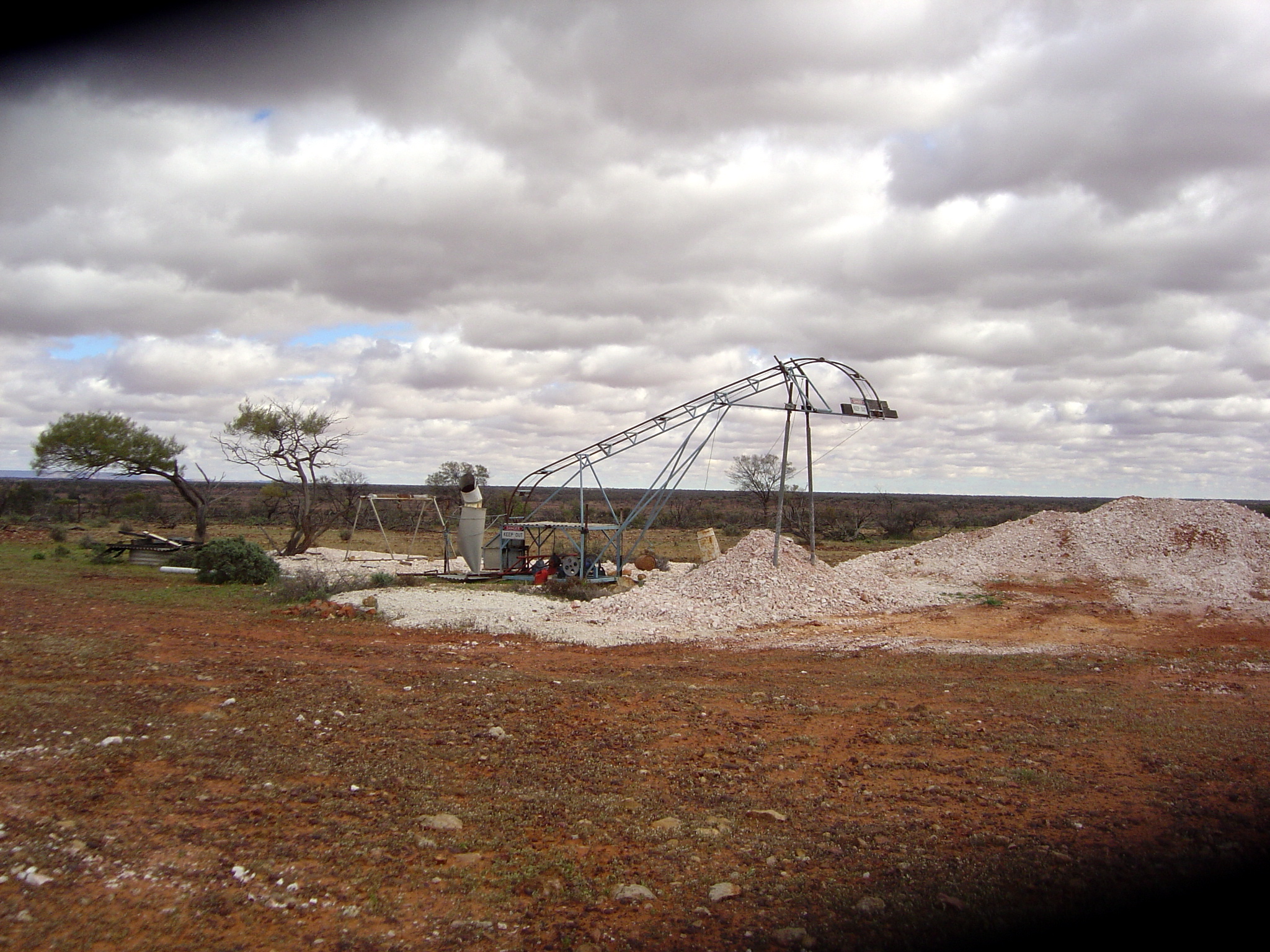 Our little trip to Gemville was very interesting and I am glad we went. While there was not a lot to see other than a largely deserted old opal field it did give us a little more understanding of what it must have been like in the early days of opal mining. The extensive diggings indicate a hive of activity over a relatively short time in the history of the area. A lot of opal must have been found here and there must be a lot still here if it could only be located easily. I hope the bulldozers don't come in to dig up this area. They remove all the old history and leave just mountains of rubble. Places like Gemville need to be retained to show what happened when ordinary miners toiled with pick and shovel to try and achieve their dream of striking it rich.