The photograph below is of the White Dam Opal field.

In July 2007, my wife Barbara and I visited Andamooka. We camped in the Andamooka Caravan Park which is on the main road into Andamooka township.

Andamooka is a small town but still has 2 hotels, a supermarket, bottle shop, Post Office, motel, and various places to buy opal. 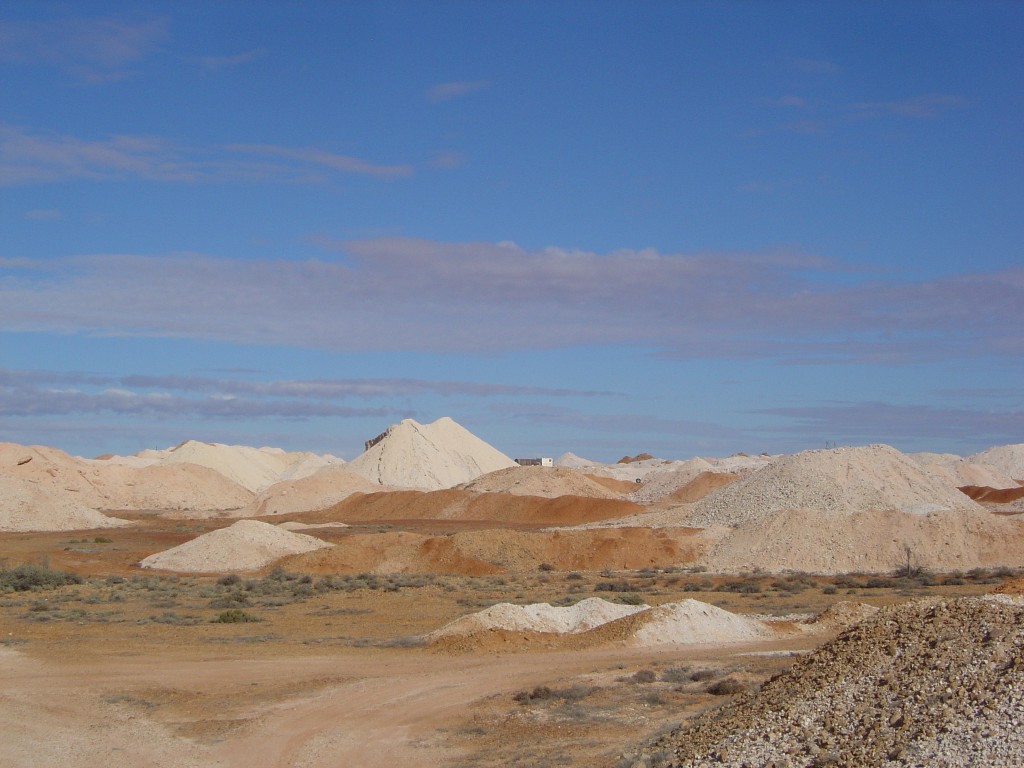 There are some historic buildings that have been refurbished. These are worth seeing as are a variety of very interesting and primitive dwellings used by miners in the past. Andamooka is almost a suburb of Roxby Downs. Many of the people working at Roxby Downs, approx 30 km away, now live at Andamooka and commute to work each day.

Mining has slowed in Andamooka and much of the field is deserted except for the occasional noodler. There are few miners who are bulldozing the old mined areas down to the opal level hoping to find any opal that was missed. This often involves excavating to depths greater than 20 metres and large heaps of overburden are left everywhere.

There is another opal field about 11 km away from Andamooka. It is called White Dam Opal Field named after a large dam carved out of of the white clay soil. Apart from the large open cuts in the field it is famous for it's Ettamogah Pub. This fine establishment was owned and operated by Bill McDougall who raised over $240,000 for the Royal Flying Doctor Service. He accepted donations in return for a glass of his own home made "plonk" (wine). Unfortunately it was deserted when we were there but we did attend a barbeque at the site where we met some of the locals. I don't recall any names but one local did stand out. He had only one arm and told us it was removed when he was young by a doctor who became infamous for removing limbs for relatively minor infections. I don't know if this was true but it was quite macabre.

In 2015 I received some comments on the web site from Terry Franklin and I would like to quote Terry as he has some extra information on White Dam which you may find interesting.

" I spent many a night staying at old Bill's shack at White Dam as a kid, as my father was one of Bill's best mates. My father and his army mates helped him build the original shack., and my brother and my father and I did the extension a few years later. All the signs around were donated from all around the world , many by Yanks who were stationed at Woomera. ( I supplied the Hanging Rock one from Victoria). Some have been stolen over the years by people who needed to take a souvenir from the area and many have blown away in some serious dust storms (including the entire Irish Convention Room) but that's another story.

Bill was one of the many people who strived to help the RFDS for its service to the community (including my sister whom they saved as a prem baby born in another even more remote town in SA).

Bill dedicated his life to raising money for the RFDS after needing their service and did this by giving any travelers passing through a welcome free glass of cold port or two (anything cold was welcome in the early days as there was no way of keeping anything cold outside of a Coolgardie safe) and then selling them a tee shirt or bottle opener or any other souvenir they wanted."

Thanks Terry for the information.

It is now 2016 and I have had a comment from Chuck Knepper from the USA and quote it here for your information.

"I was one of those Yanks from Woomera who met Bill in 1979. We became great mates. Myself and two other Yanks bought the shack just down the track from Bill and did a bit of mining on our days off. Bill was probably the smartest man I ever met. On our first meeting he asked where I was from. I told him from a small town just outside of Gettysburg battlefield. He proceeded to tell me how many troops were involved, how many casualties etc. He knew everything about the battle even though he had never been there. We all drank a lot of plonk with Bill, except when the mining warden, Dick Betterman, came to visit. Then we drank scotch and milk. I will never forget myold mate Bill, at White Dam.He was one of a kind."

Thanks Chuck. Without this sort of information these stories get forgotten.

Barbara has photographed some of the highlights of White Dam near Andamooka in 2007 and they are shown below. 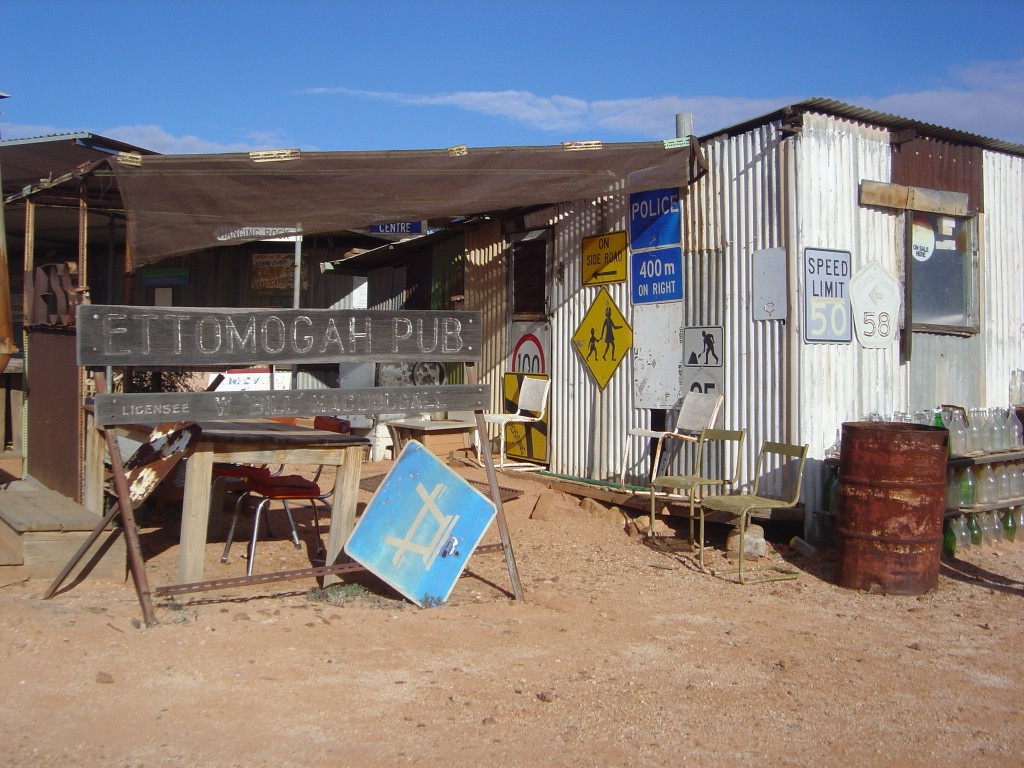 This is Bill's Ettamogah Pub. It probably would not meet standards required today but was no doubt a great success in it's day. Bill obviously collected a few sighns that had been discarded and used these as decoration for his pub. The pub's dunny as shown in the last photograph has obviously seen better days. I am not sure what the speed limit means. 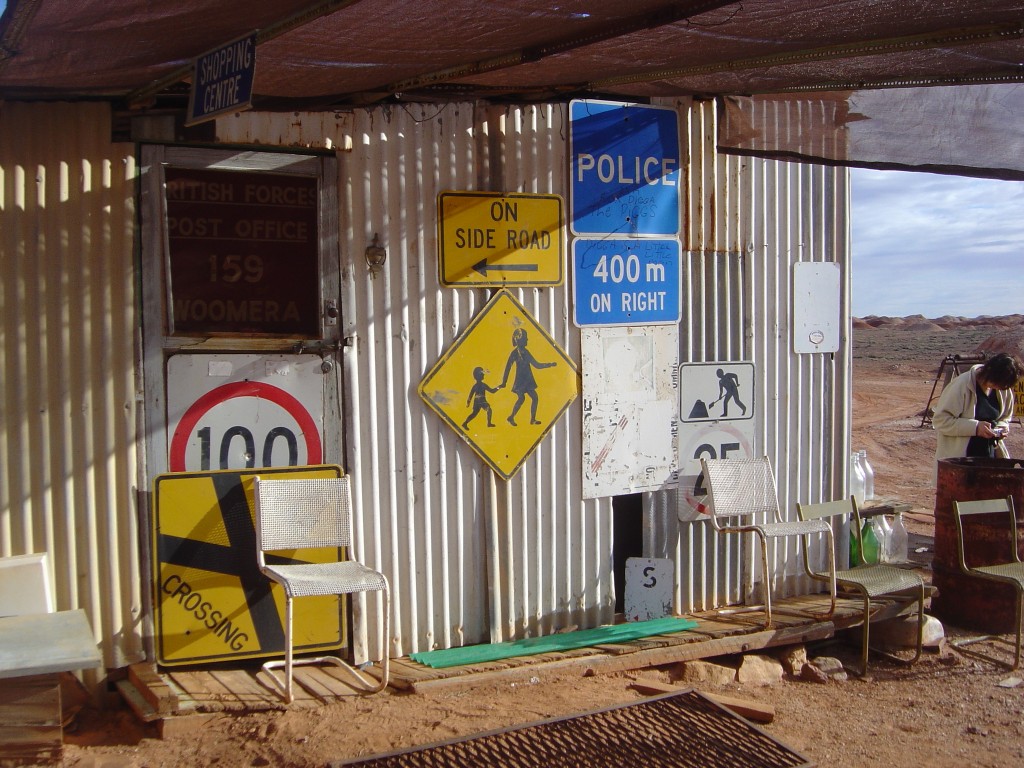 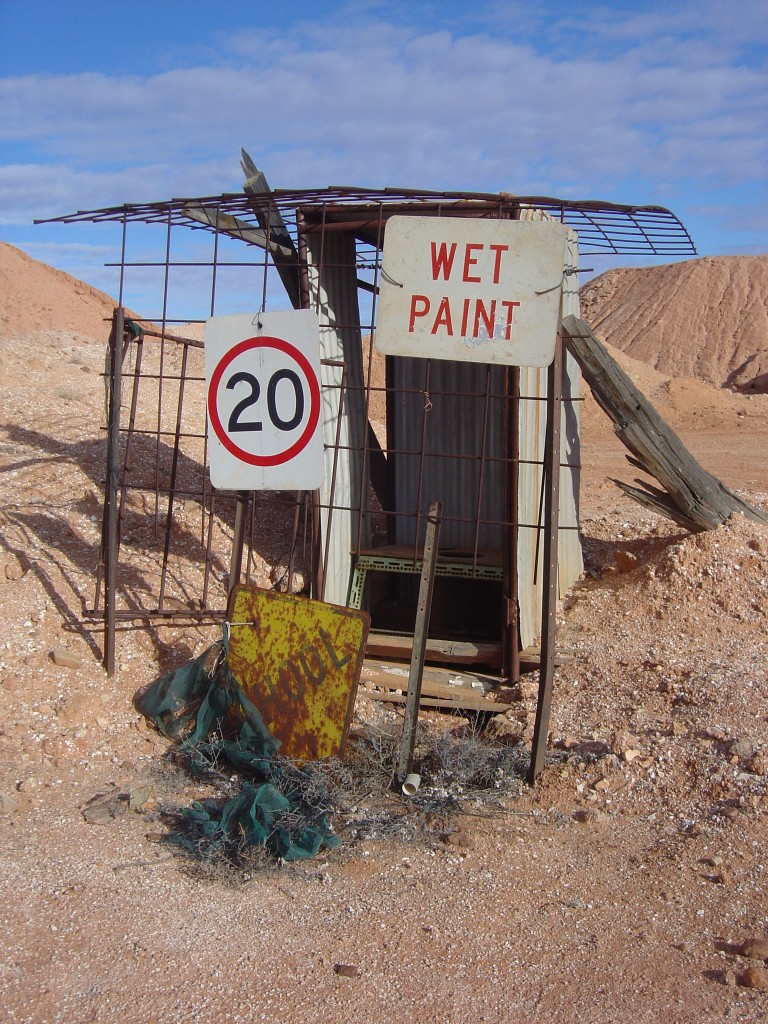